He had the best of intentions when he and Pharrell Williams spent "about a half hour" writing "Blurred Lines" -- and "no idea" that the public wouldn't recognize the song's "feminist movement within itself." Still the song's been derided as "grotesque," "degrading" and "rape-y," (not to mention, "unoriginal").

Sure, Thicke must have felt vindicated as "Blurred Lines" rose to the top of the charts, staying there for a record-breaking 16 weeks. But spending around 30 minutes busting ass to create feminist art, only to be accused of misogyny? Ouch.

Look, was it reasonable for Thicke to expect that we'd find the feminist message in 18 repetitions of, "I know you want it," and a video depicting more naked female skin than the average strip club? Probably not. But, I figured -- why not try? And what I found was surprising. It seems that "Blurred Lines" is a scathing feminist screed against... catcalling (I prefer "verbal street harassment," but really, tomato, tomahto.)

To wit: the lyrics read like a continuous string of sexually harassing inanities, and the video is basically four and a half minutes of sartorially-challenged middle-aged dudes spewing those inanities at every set of breasts, butt cheeks, lips and hair that go by. This can't possibly be a celebration of catcalling because, well, it's just so damn un-sexy. Sure, there's lots of nakedness, but as a wise man once said, there's "good naked" and "bad naked" and naked dog-humping, goat-caressing, banjo-playing, biking and jogging are definitely "bad naked." Plus, the dudes look suspiciously unemployed (don't they have anything better to do than stand around acting like assholes for their own entertainment?) and the girls almost consistently give them the brush-off, or at best, the side-eye. No way is this anything but an indictment of the practice.

Trouble is, it took me approximately 37 viewings of the video's unrated version to figure that out. Maybe it's simply not possible to convey an important feminist message via party-anthem music. Or "maybe I'm going deaf, maybe I'm going blind." Whatever the reason, notwithstanding Thicke's obviously noble effort, I'm inclined to say that he didn't quite hit the mark.

But just as nature abhors a vacuum, social discourse abhors a silence. And into that silence leaps contemporary artist, Nikki Schiro, who is just now putting the finishing touches on a series of portraits that demand -- albeit with feminine grace and sly humor -- that we take note of both the prevalence and the insidiousness of verbal street harassment. Entitled Your Mama, it will debut at Les Infirmieres Galerie in Paris in January, 2014.

A native New Yorker, Schiro has been on the receiving end of verbal street harassment for as long as she can remember. But she doesn't remember consciously questioning it until a friend casually commented that "men don't seem to catcall as much as they used to." What? Five minutes, one construction site and two catcalls later, Schiro began to wonder: "How is it that this continues to be tolerated -- even accepted -- as, 'boys will be boys,' behavior?"

Awakened to the realization that "too many men feel entitled and unashamed to hurl dehumanizing, objectifying, disrespectful, vile and ultimately vicious words at women who were doing nothing more than minding their own business," Schiro began talking to women about catcalling. Wanting to bring the words alive visually, she began to collect photographs of the women, along with the catcalls that haunted them. As her collection took shape, Schiro found herself jarred by the juxtaposition of the beauty, confidence and strength portrayed in the photographs on the one hand, and the repugnance of the words the women heard echoing in their minds on the other. To Schiro, this disturbing contrast represented the insidiously destructive power of catcalling.

Thus, the idea for Your Mama was born.

Each portrait in the series is of a real woman, any one of whom could be your daughter, your sister, your partner, or, you guessed it, your Mama. Each is based on the photograph with which the woman chose to represent herself. Each is composed with sweeping lines, voluptuous curves and lush pastel hues that seduce the eye into lingering. It's in that lingering that the ugly truth is revealed: Each woman wears a name tag bearing not her name, but her "catcall." The message is clear -- women come to identify with the awful, ugly messages hurled at them by strange men on street corners. They've been shamed by these men whom they've never met. They've been told over and over again that they're merely objects and playthings. They're not the sum of their parts -- they're nothing but parts.

But Your Mama isn't Schiro's first foray into addressing street harassment. In 2012, she was one of six artists to exhibit and participate in a multi-arts workshop addressing its disturbing rise in recent years, against both women and the LGBTQ community. Schiro has also used art to tackle the broader issue of "exploitation." In a tongue-in-cheek but painfully heartfelt series, she depicted herself as a "stalker" her "prey," a wealthy art collector who had once preyed upon Schiro's innocence and enthusiasm as a new artist. Her source material included actual correspondence between herself and the collector, and through a combination of paintings and multi-media displays, Schiro turned the "hunter" into the "hunted" and raised provocative questions about interpersonal power dynamics.

Obviously, I'm a huge fan of Schiro's work. I first heard about her ongoing series, Reconstructed in which she reconstructs old masters to reflect cancer's transformative effects on women (think Botticelli's "Venus on the Half Shell," -- post-mastectomy and bald from chemo). But it was her exploitation series that got me slightly obsessed (seems only appropriate, given the subject matter).

Apparently, I was late to the party since Schiro's been working and exhibiting worldwide since 2005, including exhibitions at the Biggs Museum of American Art in 2009 and 2010, and various commissions that include a portrait of interior designer and art curator, Sara Story, for an article in Elle Décor. In 2010, Schiro was the first non-national artist ever to have a solo exhibition in Chengdu, China.

Even more impressive is that Schiro is barely out of her 20s and completed her formal art education just seven years ago (Masters in fine art from Hunter College). As artist-in-residence at Roosevelt Hospital's Oncology Unit, via the The Creative Center, which trains and places artists to work in hospitals, hospices, cancer centers, senior programs and other health care facilities to provide art experiences at patients' bedsides, treatment areas and in waiting rooms to patients, families and health care staff. Schiro also writes for Art Comments, an art criticism collective sponsored by Art Review Magazine.

Most recently, Schiro was named one of 10 Best at the 2013 Fountain Art Fair (named for Duchamp's radical sculpture by the same name), a showcase for emerging artists whose national tour included a stop at the 69th Regiment Armory in New York City during this year's Armory Arts Week (the art world equivalent of basketball's All Star Weekend). This year marked a century since the inaugural Armory Show, which shocked and appalled the American art world of 1913 with works by Van Gogh, Cezanne, Gaugin and Picasso, to name a few, although Matisse and Duchamp stirred the most controversy.

Duchamp's "Nude Descending a Staircase," was mocked as "Rude Descending a Staircase," while Matisse's "Blue Nude," was condemned as "grotesque," "perverse" and "vulgar." In each case, the abandonment of then-prevailing notions of beauty inspired fear and rage. A century later, we've progressed to where a perceived failure to question existing notions is what raises hackles, (e.g. "Blurred Lines") thanks in part to the tradition of artistic investigation initiated by the 1913 show. In a nod to that tradition, Schiro chose to exhibit her, DIY Plastic Surgery series of paintings, in which women are depicted performing their own "extreme makeovers," raising questions as to whether the ready availability of plastic surgery has transformed us into our own artists, curators and vicious critics.

Schiro describes her focus as being on "somewhat unconventional female heroines," (who, in my opinion, tend to be, like Schiro: ethnically beautiful and deeply soulful, with highly expressive features). These heroines are engaged busily, if not obsessively, in "a quest for self-discovery, inevitably involving an investigation of their relationships, their humanity and the far reaches of socially constructed values and behavior." Her aesthetic is distinctly contemporary, even when referencing the great art masters, which she does quite often, deftly superimposing contemporary concerns onto classic themes, subjects and images. Even Schiro's media choices reflect the duality: oil paint, pastel, charcoal and water color on the one hand, digital media and collaborative projects on the other.

It's unfortunate that visual artists seldom generate the same level of hype that a hip-hop collaboration with Pharrell Williams can. But Schiro's message is meaningful, and she conveys it with clarity. There's no need to explain because her art speaks for itself, and come January, it'll be back-talking at verbal street harassment with the sassy rejoinder: Your Mama!

And if you want a taste of it, here you go: 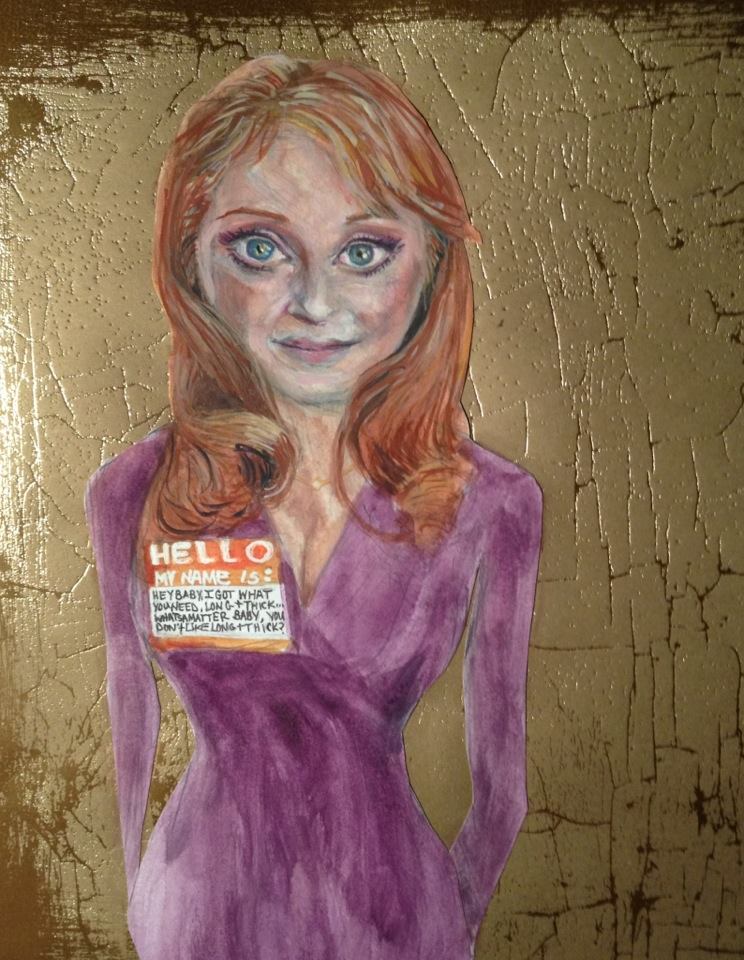