Ironically enough, it was a Facebook status that led me to writing this piece. It was one of those situations where a person wrote a status subtly talking about one of their Facebook friends, and then I thought it could have been about me -- because isn't that what we all immediately think when we see those statuses, but we're just overly paranoid? This time, I knew 100 percent he was talking about me... which is fine, because it inspired me to think about what he wrote:

I'm starting to think that when people post or write about only one side of a topic, they're really becoming an activist (which can be a great thing!) but journalism deals in facts and the neutral presentation of those facts. Something for myself, and every other journalist for that matter, need to be mindful of.

He wrote this in the same week I had been posting about the situation between Gaza and Israel. I stuck to facts: numbers, stories, important details. As journalists, we are taught to never publically show preference to one side over another. But today, especially with social media's thrive, the culture of news reporting has evolved and amidst the chaos, lines have blurred.

For days I was thinking about the invisible lines between journalism and activism. Journalism involves the telling of truth and stories. Activism involves fighting for a cause one believes to be right and true. So, what if the story someone is reporting on has a loud cause crying to be fought for? What if the story itself is standing with a cause because journalists are taught to be human first? I'll be the first person to say always stick to a gut feeling. So, when a journalist's gut says to shed light on human injustices, but mainstream newsrooms keep stories political and strategic, something just does not sit right with me.

There's a great interview in the Harvard Business Review with the seasoned journalist Christiane Amanpour. She talked about her experience in during the war in Bosnia in the '90s and about how it was a turning point in her career. Her revelation revolved around redefining "objectivity" in journalism.

Amanpour adjusted the way she looked at the war, covered the war and talked about the war based on the brutality she witnessed by a clear aggressor, Yugoslavia. Amanpour was quickly questioned about her objectivity and became discouraged because objectivity is our "golden rule" in journalism. This war forced the correspondent to examine what the rule really meant.

So what were her conclusions? And before you continue reading, please let the following sink in. Really think about it. Read it again if you have to. If you are a journalist, read it three times over because our world is currently on its head, tragedy surrounds us everywhere and we need to keep this in mind.

I was forced to examine what objectivity actually means, and I realized that in a situation such as the one in Bosnia, where you had ethnic cleansing -- genocide -- you have a duty to call it like it is and to tell the truth. Objectivity, in that regard, means giving all sides a fair hearing but never drawing a false moral equivalence. So I called who were the aggressors and who were the victims, and I'm very, very proud of that now, because that was what we had to do. I think we did the right thing as journalists and eventually managed to be part of the reason that the world intervened.

Amanpour tells us that when we, as storytellers, do our job, we need to be sure we do it right, and that includes considering the morals and ethics of a story. That means when there is a clear aggressor and victim, we cannot put them on the same level or playing field. 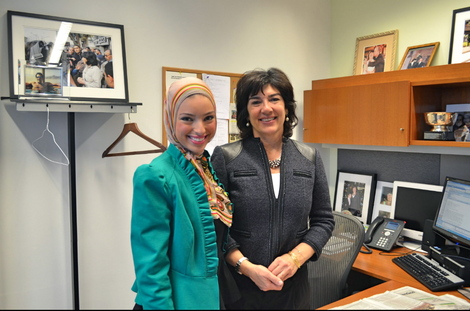 Journalists are the messengers; yet, people always complain they don't watch the news because its "lies" or "propaganda." We are often seen as the bad guys, because we've exchanged the art of storytelling for click bait, what sells, breaking the story first for more viewers/retweets without fact-checking and reporting what aligns with the perspective of the media mogul who runs the station.

It doesn't have to be that way.

In journalist Sheila Weller's new book, The News Sorority, she writes that after the 9/11 attacks, Amanpour defied then-CNN president Walter Iassacson's "attempt to get all the reporters in the Middle East to skew their stories more favorably to Israel," but instead the reporter aired a controversial report about the Israeli destruction of an Arab village.

"Christiane had the power to push a piece through," a CNN insider says in the book.

And when it comes to the truth, we must work to push it through.

When the death toll of a people has spiked to thousands per week, we cannot ignore the numbers to fall in line with conformist politics. When citizen journalists on the ground of a war zone, who are watching their houses be destroyed firsthand, and continue tweeting pictures and videos of what used to be their homes, schools and places of worship that have now been obliterated, we should hand them the megaphone. We must allow them to share their stories as their cries for help. Muddying today's stories with puppets and politics distracts and takes away from actually getting sh*t done. And then we start having to ask, well, why are there so many distractions? Why aren't we focusing on the PEOPLE, the HUMANS, the INNOCENTS.

Isn't that who we serve when we tell stories that demand answers or even international intervention? Can journalism today be objective by reporting facts and inspire activism when the facts are too much pain to bear? So, what do we do?

The Society of Professional Journalists Code of Ethics has an incredible first rule:

"Seek truth and report it. Journalists should be honest, fair, and courageous in gathering, reporting and interpreting information. "

But, throw in money, politics and agendas, and we get half-truths but never the whole picture. It really is up to us, the upcoming generation, to renew the meaning of journalism and the power of story telling-- to remember why we chose to take on this role and what our duty is to the world.

We must remain courageous. We must remain as truth tellers. We must report fairly on both sides of a story, but never draw a false moral equivalence. And we must call out aggressors and victims in order to carry out our journalistic duty of telling stories so compelling, people have no choice but to put aside race, status, politics, and religion, and serve humanity as citizens of the world.