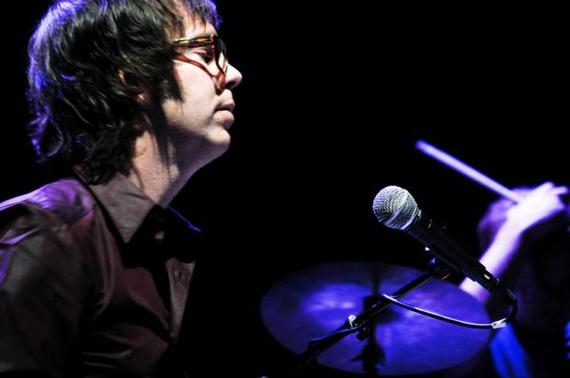 It sometimes happens like this: Ben Folds stops by a campus cafe before his gig at the college. He's recognized by the kid behind the counter, who after a bit of jumbled praise hands over the coffee "on the house." Ben doesn't make any real note of the exchange, but later that night when making up a song on stage, it's the first thing that comes to mind. So he runs with it, and a song which eventually turns out to be about more than free coffee is born.

This is music, one cup at a time.

"It had to be pretty good" he says. "But not only that, it had to be right when I was turning in an album. The thing is, I throw away almost everything before I begin. Some stuff builds up over time, and the rest goes down the drain. It might seem controversial to tell someone starting out to throw things out all the time, but that's sort of the way I do it.

"I do think that if you've only got a limited number of ideas, they don't tend to come."

During our phone conversation, Ben is waiting for a flight out of LAX. "Right next to Gate 30," he says.

You wonder, though. If someone finds worthy song material in the slightest of spontaneous happenings, is some part of them always on high alert so to speak, the lyric receptors constantly firing?

"Well, I don't run around with a Styrofoam cup in my pocket waiting for the next thing. I kind of feel like life is not walking around enjoying this distracted version of it. For me it's like the song has to sort of meet the opportunity in order to live. It's a little like biology, cells swimming upstream or something. I think it's just right place at the right time."

On May 19th, Ben Folds will perform with the San Francisco Symphony at Davies Symphony Hall. It will be a one-off show, part of a Global Symphonic Tour that sees the consummate piano rocker charting new terrain for a pop/rock act. Groups hit the road with huge ensembles and productions all the time. But this symphony tour is without parallel -- a composer/performer playing a mix of pop and classical with the different, affiliated orchestras of each city. It makes me think about how many guys I know who can't keep up with their own four piece.

I ask if the tour has seen any particular challenges so far.

"When you play with a symphony orchestra, you get fairly limited rehearsal time" he says. "But you just deal with it. Because that's the kind of musicians they are. They don't need me to come in and explain what we're doing. The more prepared you are the better it's 'gonna go. And so far, so good. We don't have time to rehearse everything, and honestly we don't have a record out anyway. Three or four shows into this, I think the main thing is to play a piano concerto of classical music, and have it just be one of my songs. That's what it's already turning into, and I think that's awesome."

When it comes to project and career choices, he divulges a free-wheeling approach similar to the one taken when writing songs.

"I'm not really a bucket list person" he says. "And I guess that can be viewed as spoiled (laughs), like I assume that everything I want to do is going to come my way. But it's different than that... I think the thing is, when you preconceive too much how you are going to do the next thing, you tend to follow precedence."

At this point in our talk, Ben is approached by someone in the airport waiting area, next to Gate 30. Funnily enough, the brief interruption plays right into an earlier point he was making.

He continues without missing a beat. "Where if I'm sitting here in the airport, for some reason, this girl that just came up to me with her friends, if we thought we wanted to make a recording onto the iPad or something, I might find I had something really, really unique. And I would hope that my instincts would tell me, 'Hey, that's okay.' You know, maybe Bob Saget would be walking along, and I'd yell over, 'Hey Bob, let's add some spoken word to this track.' You just really never know. And I think that's the best way to proceed."

How incredible would that be? Such an occurrence, I believe, would also mark Bob's first return to the music scene since joining Jesse and The Rippers on stage in what, Season 3?

But moving on, is the output of people like Ben and Johnny Greenwood and Joanna Newsom actually redefining alternative use of orchestra for current times? The early to mid-70s is still generally perceived as the apex of pop/rock orchestration. After which, through a lethal dose of pomp, sap, and schmaltz, the rock symphony passed out in a pool of its own vomit (put mildly).Ever so weary, rock musicians resolved to use strings and brass solely as garnish from thereon out.

We soon get to talking about this precarious marriage. "When it comes to orchestration, I like when you can't do without it" he says. "You know, it's not just jewelry or something, it's really a part of the effort.

"The best sort of classic example... I point to a guy I worked with a lot, Paul Buckmaster. He worked on Tiny Dancer, for example, and if you take that out, the orchestration and those hooks, it is really a different thing entirely. There's a lot of times where people use the orchestra on a rock record, and it's just so homogenized. It's a little vulgar, then. It's like saying, 'Well, we can afford to put some bling on this, and make it sound more important." But I think it needs to be harmonically in there.

"As far as these concerts go, I do take into account that I'm not there to demoralize the orchestra by coming through with a loud rock band and grafting high volume, stupid parts onto what they're doing, which is surprisingly kind of common. The live charts are very well thought out; the orchestra is the rock band."

As for a new album, he says that recording is already underway in Nashville. The tentative plan is to include the newly written piano concerto, which has three movements and clocks in close to 25 minutes, alongside a handful of "full-on pop songs."

"What I aspire to do with this next record is have chamber arrangements and percussion ensembles that will take the place of what you normally hear on a pop record. There wouldn't be drum sets, or drum machines, which are sometimes inspiring and sometimes not. I would like to have a percussion ensemble and a small chamber ensemble being the rock band.

"I think I'm in my best gear when I'm writing for the mainstream. But these sort of arrangements have let my self-conscious side relax about that. I feel like I'm now able to write much hookier, poppier, material knowing that the chamber group keeps it artistically sound."

A loudspeaker in the background announces that boarding will begin in so and so minutes. Not enough time to geek out about "Annie Waits." But window enough for a closing thought on context, from a musician whose long running success continues to be unbridled by expectations or boundaries.

"I keep saying I'm trying to make music for human beings. I try to express something or do it in a way that either moves or entertains people. You do that, and then you just see. I have a harder and harder time as I do this longer and longer, to categorize any of it. At a certain point I think it's beyond category. You know, we don't have much time in our day, and to sit there and worry about categorization seems like a waste. I think it's also that sometimes for me, I don't even know any more (laughs). I really don't know what I'm doing. And I'm very happy about why that is."

Download
Calling all HuffPost superfans!
Sign up for membership to become a founding member and help shape HuffPost's next chapter
Join HuffPost
Follow David Hunt on Twitter: www.twitter.com/hunt1905
Voting Made Easy
Register to vote and apply for an absentee ballot today
Register now