Notwithstanding reality television's success and profitability, there was a time when the genre was considered an outlier in the entertainment industry. Overtime however, its growth into a viable form of entertainment has made it both a birth place of many celebrities as well a virtual stage on which mainstream celebrities attempt to revive their careers. Fast forward past Jersey Shore, The Kardashians, The Real Housewives of Wherever (insert place here) and not only has reality television and many of the break out stars it has spawned surpassed soap operas and traditional news in relevancy for some people, but many reality stars are as much of a household name as some of their more mainstream celebrity counterparts.

Is it any wonder that the presidential candidate who makes up a majority of the campaign political coverage is a former host of a reality show himself? It really shouldn't be. Sure, plenty people are angry and fed up with the nation's elected establishment. Many are desperate for new leadership that will put the people first, keep the country safe and spur economic growth.

However, the ever momentous campaign of Donald Trump, once considered the ugly step-child of the Republican presidential field, has made the him leading contender for the party's presidential nomination. And that is in part a reflection of how many Americans' appetite for entertainment and celebrity culture are influencing their political sensibilities. To be fair the New York businessman was the subject of his fair share of headlines before his hit show, The Apprentice and later Celebrity Apprentice. Though his celebrity status was solidified because of his show, which gave him his first national platform. Mr. Trump also possesses a character trait he shares with a host of other successful reality stars: that attention-grabbing personality that translates into controversial plot lines and ratings hikes. Some of those involved in The Apprentice say Trump is using some of the tactics he learned on the show to his advantage on the campaign trail, something Mr. Trump has denied.

Pundits and strategists have expended a great deal of oxygen debating how this presidential election cycle became circus-like in nature and marred by insults, fractured political parties and policy proposals from candidates that have drawn both criticism and praise from political, religious and world leaders both nationally and abroad. However, the intersectionality of entertainment and politics becomes more apparent as the campaign season draws on and it wouldn't be too much of a stretch to say that this presidential election is partially emblematic of the nation's evolving taste for entertainment.

Reality TV is big business. There is literally a reality show or "docu-series" for nearly every interest: cooking, parenting, homemaking, business, etc. But as the over-the-top personalities that have become the draw of many of these shows garner higher ratings and more publicity, the limits to which these characters are allowed to express their personas seems to be stretched further and further. Trump may be known for his controversial remarks on the campaign trail but The Apprentice was PG compared to many other "unscripted series." The violent behavior once thought to be unacceptable and the crass language once considered too offensive for most television audiences doesn't even carry the same shock value as it once did because its no longer uncommon on some reality shows. Ratings now determine how far these shows can push the envelop.

While voting blocs have traditionally been based on the shared policy ideals of the people who make up those demographics, this presidential election cycle has seen voting blocs evolve into more personality-driven groups. However, this is a phenomena that has been happening for decades to a lesser extent. Experts say charisma wasn't as much as a factor for America's earlier presidents since there weren't as many opportunities to address the nation on a national scale and most policy decisions were made behind closed doors. The presidency of
Franklin D. Roosevelt -- considered one of the most charismatic presidents in history -- is considered to be the turning point with regards to the way personality factored into a successful run for president. 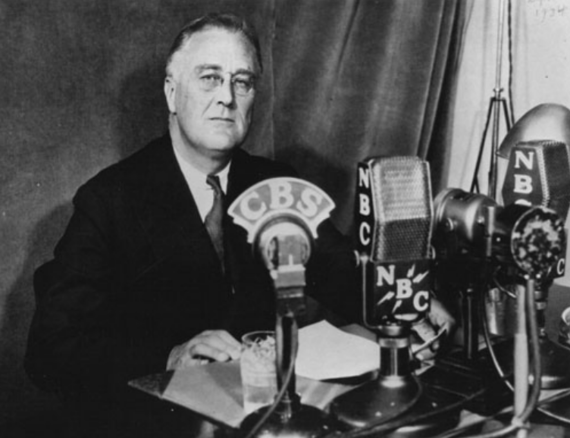 Why? The growing popularity of radio and television meant the nation was consistently listening to and watching their candidates, who now had to be more interesting and compelling for their audience. Over time the trend continued as is evident in the successful campaigns of Presidents John F. Kennedy, Lyndon B. Johnson, Ronald Reagan, Bill Clinton and President Barack Obama -- all known for their own unique charisma, which is partially credited for the popularity that helped propel them to the White House. Even non-political elites like Sarah Palin, Joe the Plumber, Herman Caine and even Jimmy McMillan (founder of The Rent Is Too Damn High Party) have benefited from the power of personality.

America's evolving taste for entertainment, including the simultaneous rise of "scripted dramas" and the ascending legitimacy of various social media platforms seems to have kicked the nation's thirst for politicians with dynamic personalities into overdrive. Both reality television and social media have provided a magnified view of the everyday lives of our favorite 'celebs' as well as ordinary people. This is especially true for millennials who have both grown up during the burgeoning prevalence of both mediums and are in large part responsible for their success. And if we've learned anything from the success of social media and reality TV, its that people really are interested in the lives of other people. Whether its a perfect stranger or a celebrity, people are drawn to the shared sense of humanity, which is omnipresent in this age of instant information and connectivity; even if what's being portrayed is a filtered or scripted version of reality. Our global society has blurred the lines between news and entertainment as well as what or who is or isn't legitimate. If something or someone is trending than their relevance cannot be denied.

Politicians and presidential candidates understand that if they want to gain popularity with voters, they're going to have to be a part of the main drivers of national discourse, which these days, are as much social media and entertainment, as it is policy and traditional sources of news. People are drawn to those whom they can relate to and to as well as those they love to hate. For better or for worse, bad publicity has become good publicity and sex tapes are vehicles to fame. That's not to say that the issues don't matter. Bernie Sanders is enjoying his momentum - in part - because he has been able to connect with voters in a way that makes him feel both relatable and empathetic to the plight of the eroding middle class. But his popularity has also been driven largely by social media and young voters. It's also a large reason why he continues to be a thorn in the side of Hillary Clinton, who last year was all but assumed to be the eventual Democratic party nominee.

On the other hand the attention and votes a candidate receives has as much to do with what they stand for as it does who they are. Voting blocs are not monolithic groups of potential constituents. People will cast their ballots for reasons pertaining to personality and policy -- and not always in equal numbers. If history is any indication, the more a candidate can dominate the news cycle with their personality, the greater a chance they have of dominating the national stage. Whether that strong personality translates into voter turnout is another issue entirely.