My doctor gave me one of those heart-to-heart talks: You need to lose some weight and exercise more, he said. The "or else" was implied. I know that being overweight increases your risk of heart disease, diabetes, strokes, and a million other bad things. But I just had to ask: Am I really overweight?

Actually, I'm more than overweight; I'm obese. Yeah, how do you like them apples? At 64 years old and standing 5'4, my scale now registers at 170 pounds. So according to those "what you should weigh" charts, I am 30 to 60 pounds overweight. In fact, at the point I stepped on the scale in my doctor's office, I had just tipped over into the "obese" category.

For the record, I look and feel fine. I've seen identical versions of this chart my whole adult life and I still don't get it. Was it designed with Barbie dolls in mind?

I just cannot reconcile the image I see in the mirror with what the weight charts have to say about it. Let me also say: Nobody insults my body or has made me feel bad about how I look. There is one simple reason why no one calls me "fat": I don't look overweight. I don't shop or wear plus sizes. But I do care about my health and I will drop some poundage and exercise more because my doctor told me to and I'm what's known as a compliant patient; in fact, I already have lost some weight and rediscovered my treadmill in the garage.

I just don't get why I had to. If you looked at me you wouldn't see an obese woman. I'm obese only because the charts that my doctor reads tell him I am. Yes, he factored in my family history and knows which diseases I am genetically prone to. But obese? Obese is just missing the mark. I've seen obese and it is not me.

So here's what I learned: There is no perfect science to knowing what we should weigh. We know that people who carry excessive weight are more prone to certain diseases but determining what is "excessive" when you are talking pounds has a lot of wiggle room. For those of medium build and medium muscle mass, the weight charts come close to being accurate. But for those with very large frames or significant muscle mass, they don't.

I also learned that the guy who dreamed up the Body Mass Index chart did so about 200 years ago. For real. The BMI was devised between 1830 and 1850 by a Belgian named Lambert Adolphe Jacques Quetelet. He was a mathematician, not a physician, and his assignment was to determine how many people were obese in order to help the government allocate its resources.

I also learned that a growing chorus of voices think the BMI is flawed in some ways, principally among them that it doesn't take into account our relative proportions of bone, muscle and fat. "Bone is denser than muscle and twice as dense as fat, so a person with strong bones, good muscle tone, and low fat will have a high BMI," notes NPR, in its own take-down of the weight charts. Hence, athletes and people who work out a lot wind up being classified as overweight or even obese.

For a more boots-on-the-ground opinion, I turned to my buds at MyFitnessPal.com, no strangers to the topic of weight charts. One user there noted that at 5-feet tall, the charts tell her she should weigh somewhere between 98 pounds to 128 pounds. Not eager to be a "98-pound weakling," she says she's OK at 135 pounds. "That's where I look and feel healthy," she says. I hear ya.

Elle Penner, MyFitnessPal's registered dietitian, says that while it's a validated screening tool, BMI is not a diagnostic tool and doesn't take into account age, gender, or muscle mass. "A couple of scenarios where BMI might not be an accurate assessment of fatness include muscular folks who may have a high BMI but a low percentage of body fat, or inactive older adults who may have a seemingly normal BMI due to muscle lost with aging," she said.

Bottom line from the CDC: Any questions or concerns about weight "appropriateness" should be discussed with a healthcare provider. Yeah, that'd be the same doctors who use these charts as their guides.

Does This Weight Chart Make Me Look Fat?
10 Chores That Can Help You Lose Weight 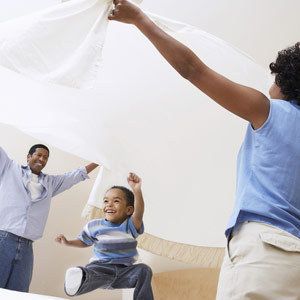