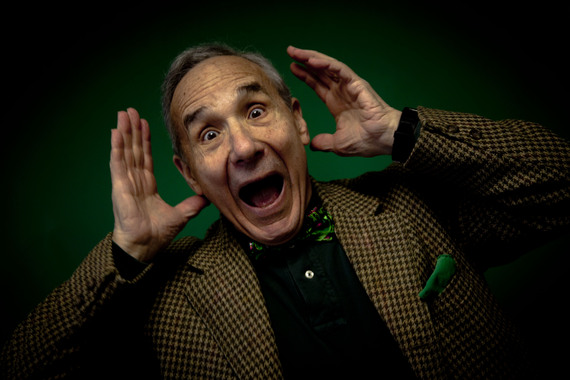 B-Movie King Lloyd Kaufman, President & CEO of Troma Entertainment, has been making indie films for 40 years, his experience spawning a line of books about making your own damn movie, including Produce Your Own Damn Movie!, which I co-authored with him in 2009. Poultrygeist (2006) was his last film, though he has now finished principal photography on Return to Nuke 'Em High: Volume 2 and needs finishing funds. And so he's doing what many an (often first time and sometimes multiple times) indie filmmaker knows all too well--turning to popular crowdfunding platform Kickstarter to help him reach his financial goal.

While you may not like the content Troma generates - their movies tend to have a particular audience - there's no denying Kaufman's passionate advocacy for creative control over your art, as evidenced by his 2-year service in more mainstream roles such as Chairman of the Independent Film & Television Alliance (IFTA). During his tenure, the IFTA was instrumental in mandating Comcast-NBC-Universal sign a contract under which they promised to develop a minimum number of independent TV shows.

New York City is the type of city where life gets so busy that months or even years can pass without catching up, so I decided to reach out to Lloyd when I heard he was on Kickstarter and catch up with him, being that he is arguably the #1 champion of indie filmmakers, going so far as to make an appearance in the first films of hundreds of filmmakers who are hoping his cache will garner their film a little special attention (it usually does). Perhaps you caught him in one of his more high profile roles in the prison scene in Guardians of the Galaxy, directed by his former protégé James Gunn? (James is one of many in a long list of people who worked with Lloyd long ago and have since joined the "Who's Who in Hollywood.")

Warning: If this is your first introduction to Lloyd, keep in mind that his sense of humor, like his films, is one-of-a-kind.

What happens in Return to Nuke 'Em High: Vol 2?

Lloyd Kaufman: It is the second half of the Return to Nuke 'Em High saga. In Volume 1, a food conglomerate called Tromorganic Food Stuffs has built its factory on the former site of a nuclear power plant (originally featured in Class of Nuke 'Em High). In Volume 2, Lee Harvey Herzkauf, Tromorganic's evil CEO (who looks a lot like Mel Brooks), has foisted contaminated food on students, causing them to transform into all sorts of hideous cretins.

Like all Troma Movies, Return to Nuke 'Em High Volume 2 has plenty of sex, gore, monsters, and world famous Troma special effects, but it also addresses political and sociological issues such as LGBTQ rights, anti-bullying, and evil food.

Where did you shoot and how long was the production?

LK: Return to Nuke 'Em High: Volume 2 was shot intermittently over the course of two years and is currently in post-production. Unfortunately, the cost of completion is $50,000 and Troma's gas tank is empty. $50,000 will allows us to cover post-production costs, including sound design, sound mixing, editing, editor salaries, color correction and special effects. So we're appealing to Troma fans and have launched a Kickstarter campaign to raise the necessary funds.

If everything goes according to plan, Volume 2's release schedule will be film festivals followed by theatrical release, and then ancillary markets. Then, if we're lucky, we lose 98.7% of our money.

Even though Troma is in its 41st year, media conglomerates leave no room for independents to derive revenue from their art, so we have to move slowly with our overhead.

What is your advice to someone who wants to be a filmmaker in 2015?

LK: If you want the big money and the Oscar, go to California.

Or, you can be an auteur like me, and live anywhere. An indie filmmaker can make an entire feature for under $10,000. You can get a productive day-job as a teacher or a nurse and, on the side, make your own damn movie. As long as you don't mind living in a refrigerator carton and having some flakka addict eat your face while you're sleeping, it can be done. Most important: "To thine own self be true," a phrase coined by Brian Williams when he was in New Orleans during Hurricane Katrina.

What do you think of the latest ACLU suit on anti-discrimination practices against women in Hollywood?

LK: It's not just a Hollywood issue. Fox is owned by an Australian. Sony & Columbia are Japanese. I've been making movies for 50 years. The mainstream media has always been racist and sexist. Just check out a blockbuster like Pretty Woman. It turned street-walking and prostitution into a Cinderella story.

The problem with the media is that the labor elites conspire with the corporate elite and the bureaucratic elite in Washington to maintain their frat boy boys' club status-quo.

What else is new at Troma?

LK: We have some second-unit filming we will be shooting in the coming weeks at Tromaville. If you would like to see the Troma Team in action or get a studio tour, come on by. We get visitors all year round from all over the globe! Also, we would appreciate it if all of you reading this would take selfies with a #SaveNukeEmHigh banner.

Any predictions on the future of indie filmmaking in relationship to distribution models?

LK: The downside for indie filmmakers is that the media conglomerates control all sources of distribution revenue. If you choose to be a genuine independent studio like Troma is, you will be economically blacklisted by the media oligopoly and have difficulties supporting your life with your art.

I majored in Chinese Studies at Yale University. The major takeaway for me was Lao Tze and Taoism. The Yin of indie filmmaking is that -- thanks to the digital revolution, the process has been democratized. However, it has never been more difficult to derive a living from one's independent art. If you plan to be a truly independent filmmaker and not a Sundance impression of one, you must be prepared to live an economically and emotionally deprived existence. Remember, we're talking about art here, and that really should be all that matters.