What apparently started out as a unique plan to beat the mid-summer heat could land a young man in hot water with German police.

According to an incident report released by Chemnitz police, a motorcycle cop was on patrol near Chemnitz, southern Saxony, on Sunday when he spotted "a convertible of a slightly different kind."

"I saw the strangest-looking convertible I have ever seen -- a roofless BMW, without registration plates, bordered around the open top with wooden boards and fake plastic flowers. It was also full of water," the unnamed police officer told Orange News.

The officer observed four young men, clad in bathing suits, splashing around inside the bizarre home-made car pool. According to the police report, "All of them appeared drunk." 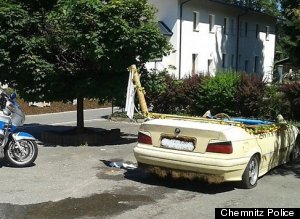 When the joyriders spotted the police officer they pulled over and allegedly fled the scene on foot.

Upon closer inspection, the officer discovered the car had been sealed with a synthetic material and filled with approximately 530 gallons of water.

The officer disabled the vehicle by disconnecting the spark plugs and flattening the tires.

When one of the men, a 27-year-old who police suspect was driving, returned to the scene to collect his wallet, police obtained a sample of his blood for a blood-alcohol analysis.

Chemnitz police spokesman Frank Fischer told The Associated Press no charges have been filed yet, as the investigation is ongoing. While it is unclear if driving a car full of water is illegal in Germany, Fischer said the vehicle "probably didn't have a road permit."

Speaking with The Bild newspaper, one of the men called the ride a "stupid idea."

"It was the first time we drove on a street and we just wanted to have a little fun," he said.