Talk about getting carried away.

A San Francisco woman faces charges of assault with a deadly weapon and misdemeanor hit and run after she allegedly struck a traffic officer who was issuing her a citation, then drove 12 blocks with the man on the hood of her car.

Witness Allison Yates said she snapped a photo of the incident as driver Bo Mounsombath, 33, sped by with the attendant clinging onto her car the morning of Sept. 18. 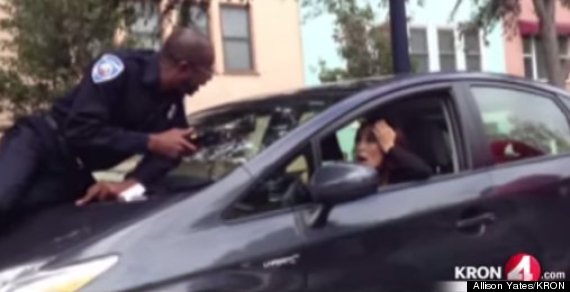 "I saw her go by and realized there was a guy on the hood on his back, hanging on kind of spread-eagled. She turned right from that far left lane across all lanes of traffic," Yates told Hoodline. "She was screaming, he was screaming, it was insane."

Yates' photo is outrageous, but so are the details in the case. Police caught up with Mounsombath on Market Street, about a mile from where the incident started.

According to KTVU, the officer told investigators that he saw Mounsombath take a street sweeping ticket from another car and place it on hers. He walked up to give her a ticket, then Mounsombath stepped on the gas, striking him and a motorcycle before leaving the lot. The officer held on.

Mounsombath told KRON that the officer asked her to "do things instead of getting a parking citation which led me to believe he was posing as a meter maid." The woman told KTVU that the officer had asked for her phone number, felt sexually harassed, and fled out of fear. She said she didn't mean to hit the officer.

San Francisco District Attorney spokesman Alex Bastian told KTVU that prosecutors are looking into the allegations against the officer.

Yates acknowledged that Mounsombath appeared visibly upset during the incident.