As recent visitors to Atlantic City and fans of HBO's Boardwalk Empire, we thought we just had to sort out the fact and fiction presented in the show, specifically as it applied to the bars that so many of the scenes take place in, especially the opening scene.

Those familiar with the show might remember the first episode of the first season. It was set on January 15th, 1920 in Atlantic City, New Jersey and Enoch "Nucky" Thompson (crime boss of Atlantic City and leading character of the show) was celebrating on the eve of the ratification of the 18th Amendment -- more commonly known as prohibition -- by throwing a lavish party at an establishment known as Babette's Supper Club.

The show presents the club as Nucky's favorite hang out where he spends much of his time entertaining mobsters and politicians alike, while also enjoying elegant meals and seemingly never-ending supply of booze.

After a bit of research, however, we found these events would have never occurred at Babette's, which didn't open until 1927, but as we dug further into Atlantic City's history, we discovered the location that these parties would have most likely occurred. Even better: we found the place still exists.

The location is one that Nucky was not only known to regularly visit during prohibition, but also one that was under his protection and to which he provided booze. In short, we found the Babette's Supper Club featured in the show... only it was and is known by a different name. 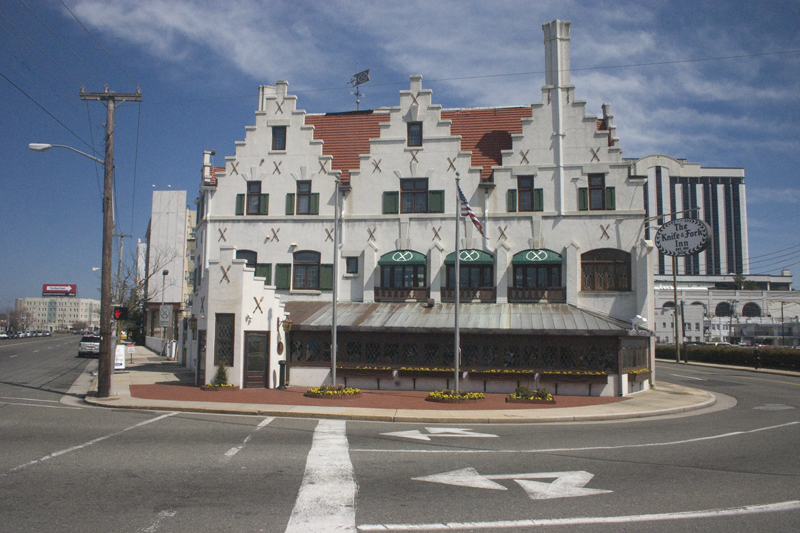 The location is The Knife and Fork Inn and it thankfully still stands and operates as Atlantic City's window to its shady past.

Originally opened in 1912 the Knife and Fork was established by "the Commodore" Louis Kuehnle and his cronies -- including Mayor William Riddle -- as a gentleman's only drinking and dining club.

The first floor contained a lavish bar and dining room where a no-ladies' policy was strictly enforced. The second floor featured a ladies lounge (separate from the dining room) where women waited until they were summoned by members or guests of the club into the main second floor area containing curtained alcoves with dining tables. The third and fourth floors featured rooms used for gambling and as private retreats for ladies and gentlemen to (ahem) retire.

In true Boardwalk Empire style the Knife and Fork and its members ignored the 18th Amendment and openly served and consumed alcohol well into prohibition. That tradition continued until the mid 1920s when the feds had finally tired of the establishment's disregard for the law and so raided the club and destroyed most of the bar and its contents.

The raid marked the end of the popular speakeasy and the property was sold in 1927 to the Latz family. Thinking prohibition was permanent the Latz' tore out the remaining bar features and turned the Knife and Fork Inn into a full-fledged, law-abiding restaurant. It remained as such under the ownership of the Latz family until 2005 when the Dougherty family (another local family with deep Atlantic City ties) purchased the establishment and began an extensive renovation to bring the 1920s luster back to the historic gentleman's club.

Today the Knife and Fork is open to the public (gentlemen and ladies alike) and when you step inside you are immediately whisked back to its heyday. The first thing you'll notice is the expansive dark mahogany bar flanked by pictures of the restaurant and the local area dating back to the Inn's 1912 founding.

While the first floor is impressive, it is the second floor that really gives you a reason to visit. Making your way up the steep stairs, you'll find a dining room reminiscent of its 1920s roots. With an expansive prohibition-themed mural, original false-bottomed booths (used to store and hide liquor during prohibition) and antique service-request buttons on the wall (rumored to have been used to request food, booze, ladies and warn of an imminent raid) it is truly a treat to sit down and imagine the characters who once frequented this place. 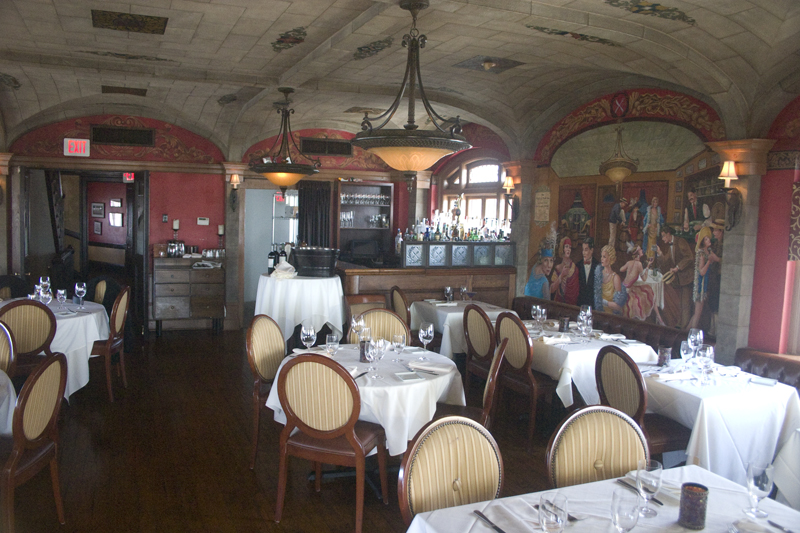 If you're ever in Atlantic City you owe it to yourself to stop by the Knife and Fork Inn. Request to sit in one of the antique booths on the second floor to make the experience really memorable. Order an Aviation -- a pre-prohibition era gin-based drink and a featured cocktail at Knife and Fork -- and spend some time really taking in the ghosts of the past surrounding you.

Let your imagination transport you to Atlantic City of 1919 while you picture characters like Nucky and the Commodore drinking at a table next to you discussing the day's take or their next "business" move. The Knife and Fork is a unique piece of history and one not to be missed.

How to Get Here:
Atlantic City is located about 55 miles south east of Philadelphia. The drive is quick and easy via the toll way and frequent buses and trains from Philadelphia give travelers plenty of travel options.

Once you arrive The Knife and Fork Inn is located where Atlantic, Pacific and Albany Avenues meet at 3600 Atlantic Avenue.

When to Go:
Having been to Atlantic City in both the winter and summer we have to say the best time to go is during the summer. January through early May can be brutally cold during which most attractions are closed though the Casinos remain open and active.

Nearby Distractions:
Much like the Las Vegas strip, casinos line the entire length of Atlantic City's boardwalk. Enjoy an afternoon walking the length of the boardwalk while stepping in and out of casinos, restaurants and local attractions. Grab a ride in one of the hundreds of push carts to make it a truly unique experience.

Also, located just off the boardwalk, is the not-to-be-missed Irish Pub. A bar throughout the winter and a hotel and bar during the touristy summer months it is a great place to grab a drink, great meal or even a room for the night. (Did we mention....the bar is open all night every night?)