Spoiler Alert: Do not read on if you haven't seen Season 3, Episode 11 of "Boardwalk Empire," titled "Two Imposters."

Wow ... that was an amazing episode of "Boardwalk Empire." My immediate thought is that it may be the best episode in the show's history, a suspenseful, action-packed and brilliantly executed hour of TV that could compete with the strongest offerings of "Homeland," "Breaking Bad" and "Mad Men" that we've seen this season.

As it ended -- and Eli pulled up with Capone and troops from Chicago to join forces with Nucky and Chalky to defend Atlantic City from Gyp Rosetti -- I was just screaming "Ahhh!" as my brother yelled, "Best 'Boardwalk' ever!" Then we high-fived.

It was really gratifying to watch the episode's front-to-back awesomeness rescue what has at times been an uneven "Boardwalk" season. Just as it did in Season 2, the show rewarded its fans who have faithfully stuck with it through a season that has at times felt like a slow burn.

The beauty of the episode was that it delivered everything we've been waiting for the show to do. Nucky's war with Rosetti arrived with a bang. The first 15 minutes featured two scenes -- the attempted hit on Nucky at his office and the car chase scene at the hospital -- that felt like instant mob-lore classics. Those scenes were so incredible that it had me wondering if "Boardwalk" producer Martin Scorsese may have taken more of an active role in directing or advising with this episode.

The Nucky-Chalky-Capone alliance that we've been rooting for finally came together, and if Nucky adds a suddenly on-the-streets Harrow to his Prohibition A-Team in next week's season finale, that would just be the cherry on top. Steve Buscemi morphed seamlessly into Nucky Thompson, Gangster Hunter, single-handedly gunning down four of Rosetti's men. Everyone was wearing gun holster suspenders! It was great.

And perhaps not coincidentally, all of this happened with Margaret, the kids, his girlfriend-on-the-side and Nucky's domestic life completely out of the picture. Maybe in the wake of Owen's death, and Nucky's realization that he and Margaret were having an affair, "Boardwalk" can embrace the "full gangster" outlook that Nucky has this season. When "Boardwalk" has dragged, it's been because of the show's focus on Nucky's home life. While the "Sopranos" thrived on that mob-family dynamic, "Boardwalk" has never been able to make Nucky's family life as interesting as the booze, mob murders and political wheeling and dealing it does best. But in this episode, "Boardwalk" embraced its full gangsterness, and the result was badass and beautiful.

With that big-picture stuff said, here are some more thoughts, theories and observations.

Michael K. Williams turned in an amazing performance in this episode after the writers finally gave him a chance to shine. Granted, I was having a hard time not imagining him as a Prohibition-era ancestor of his "Wire" character Omar Little, but maybe that's because he was dropping pearls of gangster wisdom all over the place. Then again, pretty much everything Michael K. Williams says sounds amazing. Case in point: He made eating stale donuts sound profound. "Call 'em day-olds. Day old bread. Rock bread. Used to soak 'em in sweet milk."

The scenes of Chalky sitting on his throne as Nucky sought refuge on his side of town were so excellent that it proved how underutilized the character of Chalky has been this season. It's downright weird that we haven't ever really seen Chalky operating in gangster mode on his home turf. Seeing Chalky as the undisputed leader of his people made him seem more powerful than we've usually seen him. And it was good to see him cement his alliance with Nucky. If Nucky gets Atlantic City back, he promised Chalky the club he wanted in exchange for his protection. I'm glad they finally put this character to good use. Better late than never.

The surgery scenes on Eddie Kessler were literally gut-wrenching, and riddled with suspense as the guns-drawn stand-off between Rosetti's forces and Chalky's played out outside. It was sad, but I had to chuckle when Nucky realized that he had no idea if his manservant of many years Eddie Kessler had any family, because I had just asked my brother, "I should know this, but what is that guy's name again?" He didn't know either.

The scene of Harrow packing his guns set to beating drums after he'd been kicked out of Gillian's brothel gave me chills. Rosetti moving into Gillian's whorehouse is a great setup for Harrow to ultimately take him out, even though he was sent packing. At the very least, he has some intelligence to give to Nucky about Rosetti's whereabouts.

Another thought that lept into my mind was that Gillian could just kill Gyp herself. This season, we've already seen that she's willing to kill for her independence. And she did not look thrilled about Rosetti moving his goons into her place, forcibly taking a partnership in her business and turning the place into a gangster fraternity party. This is the Artemis Club, dammit! There is no fornicating allowed in the parlor. Wouldn't it be great if Gillian used Gyp's penchant for erotic asphyxiation to actually kill him? Granted, she'd be giving control of Atlantic City back to Nucky, who she hates for murdering her son, but you get the sense that's a compromise she might be willing to make to gain back control of her life and business. Add her to the long list of candidates that could now plausibly take Gyp down. I'm still rooting for it to be Harrow.

Speaking of theories, it now seems pretty clear that Nucky did not tip off Luciano about Owen's hit on Masseria, a possibility I raised in last week's recap. He was caught so off-guard by the affair -- asking Kessler if he knew about it -- that I don't think that's a plausible scenario. But I still believe that somebody in Nucky's inner circle had to alert the New York crew about their plans. Here's another idea: Could it have been Mickey Doyle? He was in the room with Nucky and that federal agent (himself another suspect) when Nucky announced his plans for a hit on Masseria. Doyle can't be too happy about being banished to rural Pennsylvania to run Mellon's liquor warehouse. Maybe Nucky will add Doyle's name to the list of people he wants dead, which he's about to give Capone.

Luciano was arrested by an undercover cop pretending to be a mute in a heroin deal that went south. The real Luciano was apparently arrested 25 times between 1916 and 1936 without serving any jail time, so it's a safe bet that he'll be getting out of trouble on this one. They didn't call him Lucky for nothing.

Capone's quote in the episode's final scene was ridiculously cool. "I've been on the road for 18 hours. I need a bath, some chow, and then you and me sit down, and we talk about who dies." It's going to be quite a season finale next week.

What did you think of this episode? Leave your thoughts and theories in the comments. 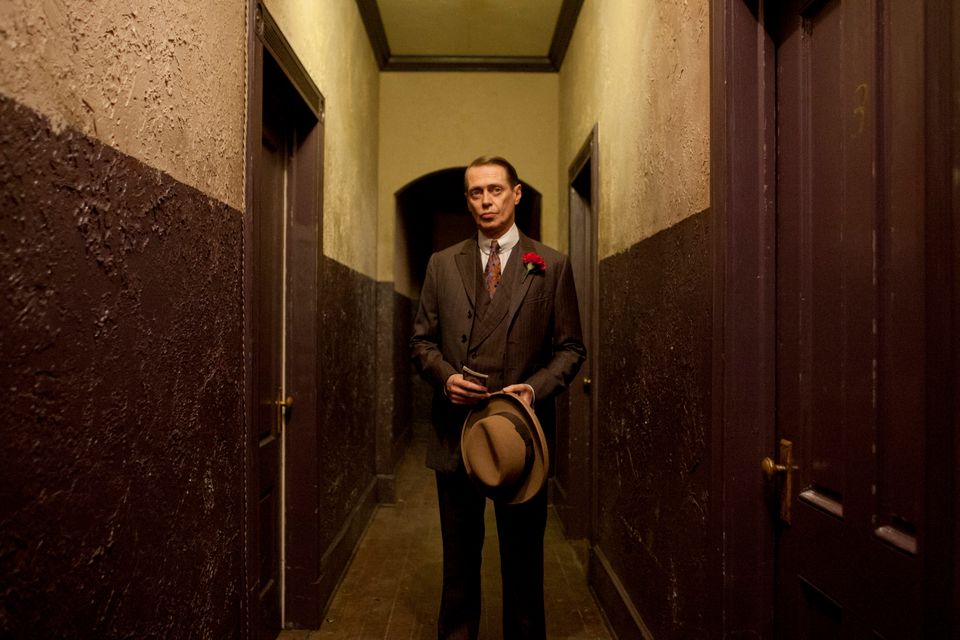