For the past six years, the Sea Shepherd Conservation Society (SSCS) under the leadership of Captain Paul Watson, has launched an annual campaign in the Southern Ocean to prevent the Japanese Whaling fleet from killing whales. Every year, the Japanese send a fleet of ships to the Southern Ocean Whale Sanctuary to kill and process for human consumption a large number of whales using a loophole in the International Whaling Treaty which allows for "scientific research."

This year the Japanese fleet has added security forces, ships and planes dedicated to tracking the Sea Shepherds location, and physical violence against SSCS. Just last month the Japanese whaling security ship the Shonan Maru No. 2 collided with the SSCS high-tech stealth vessel the Ady Gil, thereby cutting it in two and sinking it. The six crew members on board at the time of the incident survived.

In yet another violent action this past weekend the Japanese harpoon vessel the Yushin Maru No. 3 deliberately rammed the SSCS Bob Barker and caused a meter long breach in the hull, endangering the lives of the crew on board in the extreme cold of the Southern Ocean. The collision occurred at 65 degrees 21 South, 67 degrees 58 East, about 180 miles off Cape Darnley in the Australian Antarctic Territory. Fortunately there were no reported injuries from the incident.

Captain Paul Watson of the SSCS flagship the Steve Irwin which has now joined the Bob Barker in efforts to prevent the Japanese Whaling fleet from killing whales provided an update yesterday by satellite phone.

We are chasing the Japanese fleet right now, it's pretty rough seas so we are being knocked all over the place.

Are the Steve Irwin and the Bob Barker working together at this point?

Yes, both the Steve Irwin and the Bob Barker are behind the Nishan Maru (Japanese factory ship which processes whale meat for human consumption) and behind us are three harpoon boats that are chasing after us. They haven't killed any whales for four days, this is our fourth day of chasing them. If we keep them on the run for the next two to three weeks we are certainly going to impact their kill quota and their profits.

Did you repair the hull on the Bob Barker, is it seaworthy?

Yes we managed to get it welded shut which is good because the weather is really bad right now and it would take on water otherwise. Those repairs have been done and we had a water cannon fight between the Steve Irwin and the Nishan Maru and it turned out our water cannon has a longer range so we came out a little better on that today.

The Japanese fleet is obviously being very aggressive this year in trying to prevent you from disrupting their whaling, what is the overall demeanor there now?

They have Japanese security forces on their boats this year - they are far more disciplined and much more aggressive and I think they have clearly been frustrated. They have also been given a green light by New Zealand and Australia because they sank the Ady Gill in the Australian Antarctic Territory and they were not even reprimanded by the government. I can tell you if we had sunk a Japanese boat down here I would be under arrest right now. So there seems to be one law for them and one law for us.

Will you be pursuing any maritime actions against the Japanese? They have sunk one of your vessels and now have damaged a second.

Well they seem to be untouchable. Nobody wants to go after them; Australia, New Zealand, the Netherlands, nobody wants to say anything. Basically they can do whatever they want down here. They are targeting endangered whales in an international whale sanctuary in violation of a moratorium on whaling and nobody does anything about it so we are really at a disadvantage. They know their government will justify anything they do while we have to stay within the boundaries of the law and not hurt anybody. 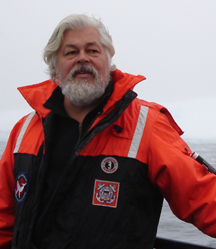