Like millions of others, I watched Andrew Jarecki's The Jinx to its riveting conclusion -- when Robert Durst, the subject of the six-part HBO documentary, all but outed himself as a serial murderer. It was a conclusion powerful enough to prompt the FBI to arrest Durst on suspicion that he murdered a female friend in Los Angeles in 2000.

But like just a few others, The Jinx had me remembering my own run-in with Durst, when I was just a kid at summer camp deep in the heart of the Berkshires.

Post-Jinx, I discovered evidence of that period in an old filing cabinet. Amongst old piano recital programs, yellowed copies of LA Weekly, and a Gold Record of Paul Anka and Odia Coates' disgraceful single "(You're) Having My Baby," I found a 1964 photo of me and my bunkmates. Standing behind us was our counselor, Bob Durst.

I don't claim any insight into the psyche of this individual. I mostly recall fairly innocuous interactions with a guy who may have gone on to do terrible things.

But I'm not saying Bob was normal. In fact, my bunkmates and I discovered early on that he was a certain kind of drug dealer; and, sure, if prompted, perhaps we might conclude that even then he was a serial criminal.

The drug -- a luscious, thick milkshake with the ironic street name "Awful Awful" -- could have been opioid-receptor Nirvana. It was manufactured in the backroom lab of an ice cream shoppe deviously dubbed "Friendly's." (Years later, perhaps in an effort to dodge the authorities, the Awful Awful was renamed the "Fribble.")

Bob's "crimes" back then: illicit transport of an intoxicating substance across camp lines; intent to distribute said substance; scaring the shit out of minors by shaking them awake in the dead of night to inject said substance directly into their bodies; and possession of drug paraphernalia including the "wide straw," an unusually potent delivery system.

In layman's terms, Durst shocked the hell out of us by treating us to the best stuff we'd ever tasted. The pleasure of that first dreamlike gulp -- bound up as it was with the momentary terror of being stirred from a deep sleep by a hulking presence -- was nothing short of orgasmic: a sweet jolt of cold that went down smooth and set a standard for all future moments of ecstasy.

To confirm that my recollections were as sublime as I imagined, I reached out to two bunkmates who went on to become gifted writers. When they articulated their remembrances of Awful Awfuls past, I was not disappointed.

Marc Barasch, author of such best-selling and profound books as The Healing Path and Field Notes on the Compassionate Life, recalls "being shaken awake by Bob, the wild-and-crazy-guy counselor, grinning over me as he handed me a frosty Awful Awful, straw already in place. It seemed transgressive and conspiratorial in a camp that required us to tuck our army-drab blankets into our bunks with perfect hospital corners."

For Stanley Weiser, whose many wonderful screenplays include Wall Street and W, the experience was literally Proustian: "Awful Awfuls are to me what Proust's madeleines were to him. An instant conjuring of a moment in time where all in the world was safe and still and magical."

I never feared violence from Durst. Nor, as far as I can tell, did my bunkmates. But he was scary in a more existential way. The smart/mega-rich/good-looking/well-built guy from Scarsdale -- who could smack a softball harder than anyone else in camp -- had an air of superiority that made me think I must be doing something wrong even when I knew I wasn't.

Now, in the aftermath of The Jinx, I stare at my old camp photo with fear and fascination. Perhaps I'm projecting, but his eyes seem to say, "I couldn't give a shit." And the odd tilt of his head, as though it was already overruling the rest of his body to descend hellward, is deeply chilling.

Do I see the kind of arrogance that might cause a person to believe he can do unspeakable things with impunity? I believe I do.

And I feel a retroactive nearness to evil... 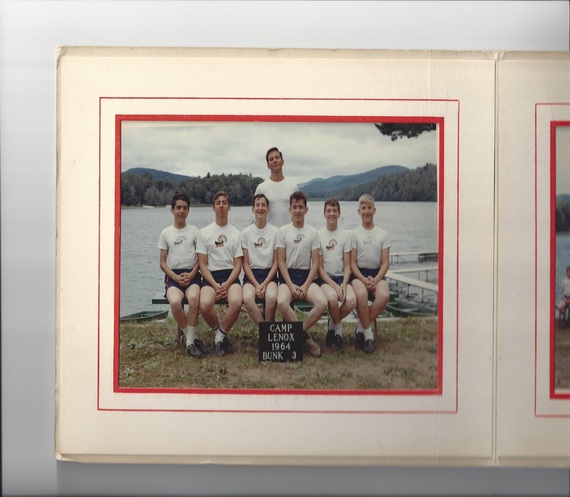