Almost never will more than 80 artists unite to support one cause, let alone create, pay for and donate 76 original tracks to raise money for it, but when the cause is Amnesty International and when the songs are Bob Dylan's, something quite magical happens.

"The connections between Amnesty International's mission and Bob Dylan's music seem, on a moment's reflection, so obvious and natural that they require no explanation. For half a century, Amnesty has pressed to secure the fundamental human rights of the persecuted and imprisoned across the globe, standing for the sanctity of individual conscience above arbitrary authority. Over that same half century, Dylan's art has explored and expressed the anguish and hope of the modern human condition," as Sean Wilentz so eloquently opens in his liner notes for the album.

Dylan and Amnesty were both seemingly born out of frustration with the state of human rights, dignity and enlightenment. In the 1960's it took a songwriter and a lawyer, one launching his career in Greenwich Village and the other starting a movement for human rights in London, to shine a light on global injustice. Dylan's poetic and unique observation of the human condition and Amnesty's real world view of the oppression and suppression of people and freedom called us to action. 50 years later we have bound them together in this album Chimes of Freedom. 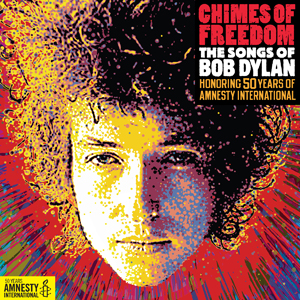 With the struggle for freedom manifesting from Arab Spring to the Occupy movement, 2011 was a fertile time for us to be making this album, and there was no better theme song than Dylan's "Chimes of Freedom". His original 1964 version of the song appears as the closing track and is a fitting tribute to the song's lasting significance, forever-youthful power and poignancy.

We tip our hat to Dylan, who, if reluctantly, carries the torch handed down by Woodie Guthrie, Paul Robeson and many others. His songs ignited his own generation and continue to give voice to generations since, as evidenced by the outpouring of interpretation on this album by musicians of all ages and stripes.

This collection of brilliant performances reflects the interpretation of Dylan's songs by every generation of musician, every style, by men, women and children (Sorry no singing animals, although we tried.) from Pete Seeger at 92 singing Forever Young (the obvious choice) to Miley Cyrus at 19, raised on Dylan albums played in her home, channeling her godmother Dolly Parton with a touching version of You're Gonna Make Me Lonesome When You Go.

Seventy-five of the 76 songs -- all but Dylan's original Chimes of Freedom -- are newly recorded or previously unreleased. If you make your own playlist, there's an alternative album, a rock album, an adult album, a country album, a woman's album, and an album of those who would be the next Dylan. And all profits go to Amnesty International. Check out the video below for the exclusive premiere of Mariachi El Bronx performing "Love Sick."

For the past 50 years Amnesty has stood up to dictators, fought injustice and defended persecuted and imprisoned people all over the globe. A winner of the Nobel Peace prize, Amnesty is the world's largest, grass roots human rights movement with over 3 million supporters in 150 countries. The album is dedicated to people unjustly imprisoned or threatened for the peaceful expression of their beliefs, people like Reggie Clemmons and Liu Xiaobo.

For around twenty dollars you can get over 4 hours of music. Make your own mix of the album, put on individual tracks and listen for an hour, or play the whole thing in the background for hours and days on end. Spend the time listening to (just to name a few) Adele (who had an early hit with a Dylan cover), Sting, Diana Krall, Elvis Costello, Tom Morello, Dave Matthews Band, Patti Smith, Bryan Ferry, Joan Baez, Carly Simon, Bad Religion, Rise Against and some bands you may not know about yet but will be introduced to on this album, like Darren Criss from Glee and his brother Chuck Criss of Freelance Whales, We Are Augustines, Blake Mills with Danielle Haim, Mariachi El Bronx, Cage the Elephant, Silversun Pickups, Ximena Sariñana, and many others.

Much good has come from musicians who band together and sing -- to protest racial injustice in the civil rights era (the image of Bob Dylan singing at the podium during the march on Washington led by Martin Luther King in 1963 comes to mind), to protest the various wars we fight, to sound the tragedy of 9/11, to call attention to starvation, famine, natural disasters, nuclear arms, genocide, AIDS... Song inspires, it enlightens, it ignites, it soothes and you can learn an awful lot if you listen to the poetry of the lyrics while you tap your foot and hum along. No book can do that, no film, television show or video game. Nothing can do that but music.

This album will be where you are, everywhere music is talked about and sold: on NPR, on non commercial, commercial and college radio, in stores like Whole Foods, Best Buy and Target, on the internet at Amazon, who is generously donating their profits on the album sales, and at iTunes, Google Music and Spotify. Starbucks is carrying a special two-disc collection curated by its music team. You'll see album artists on Ellen, Conan, Fallon, Letterman and more. Maybe you've already read about the album in the New York Times or the LA Times. The music retail community is donating ads and positioning. Magazines like Rolling Stone, Spin, Filter, Mother Jones and others are donating ads, as are television stations such as MTV, Spike Comedy Central. Almost 10 million impressions have been donated from a variety of websites, including your own Huffington Post. This is a true melding of message from across many communities, businesses and artists. Do yourself a favor, spend twenty dollars to entertain yourself and help Amnesty International continue with its important work. This is one album where the overused cliché really applies, BUT WAIT THERE'S MORE... this is an album that saves lives.