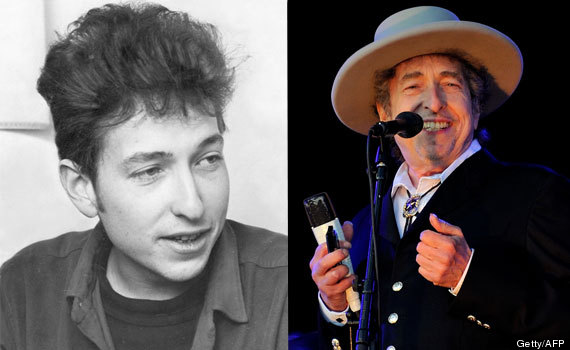 Bob Dylan, then and now.

Seeing Bob Dylan live at this phase of his career is a bit like bird-watching. You spend a lot of time waiting for something to happen, but if you're lucky you experience an occasional moment of true magic.

Last Friday, my friend Duff McDonald and I fought through three hours of traffic to see Bob play with Wilco and My Morning Jacket at the Webster Bank Arena in Bridgeport, Connecticut. (Their "Americanarama" tour comes to Hoboken, Jones Beach and Camden, NJ, this weekend.)

If there are five levels of Bob fandom, I'm probably a 3 and Duff is a 4. There are albums I don't listen to and songs I've never even heard. I've read a few books, but not as many as Duff has. And neither of us has ever dug through Dylan's trash (to my knowledge). But compared to most people, I'm obsessed with Dylan. I've seen him 11 times. If I'm honest, it's almost religious.

As we waited for Bob to take the stage, Duff and I started having the usual conversation. What would he play? How would he sound? Would we get a few glimpses of magic?

It's not guaranteed, by any means. Duff and I have seen Bob together five times, and two of the concerts have been duds. Bob doesn't play recognizable versions of his songs. He relentlessly rearranges them, reportedly introducing tempo and key changes any time he decides his band is getting too comfortable. The results can be disappointing, to say the least, with Bob going one way, the band going another, and the audience heading for the exits. And then there is the matter of his voice. On a good day, he sounds like a chain-smoking bluesman celebrating his 100th birthday. On a bad day, he sounds like a bullfrog gargling broken glass.

All of which makes Bob's decision to continue his "Never-Ending Tour" so interesting. In 2013 alone, he's scheduled to play 80 dates. This isn't Paul McCartney tearing through yet another radio-perfect version of "Drive My Car" night after night, as the celebrities and hedge-funders in the front row tell themselves, "I'm actually watching a Beatle right now!" Bob could do that if he wanted to. Sure, his voice is damaged, but I don't doubt he could sing the old arrangements if he felt like it.

Instead, he performs at venues ranging from respectable to rinky-dink, for fans too loyal or too clueless to move on to something hipper. It's enough to make you wonder: What is Bob doing up there night after night? And what are the rest of us doing watching him?

On the first question, I tend to judge Bob's actions through the lens of genius. To me, a genius is someone who excels far beyond everyone else at something the world happens to need at that moment. At the turn of the last century, the world needed a theory of relativity, and Albert Einstein supplied it. And in the 1960s, the world needed a voice to make sense of the changes rippling through the culture, and Bob Dylan owned it.

There's a strong case to be made that it was all an accident. In his beautiful book "Chronicles," Dylan insists that he wasn't writing about his changin' times. He says he spent much of his time in the library back then, reading newspaper articles from a hundred years earlier. He wasn't singing about Civil Rights; he was singing about the Civil War!

Taking Dylan at his word is always dangerous, but I half-believe this to be true. And to me, it helps make sense of his latter-day existence as a wandering troubadour.

I believe Dylan is following his muse, plain and simple. And why wouldn't he? The muse made him famous at the ripe old age of 22. The muse gave him -- and us -- "Blowin' in the Wind" and "Like a Rolling Stone" and "Tangled Up in Blue" and "Things Have Changed," to name just a few of the many, many timeless songs he has composed. If the muse is telling him to play night after night, who is he to say, "Aw, thanks for the invitation, but there's a dinner party in Malibu I don't want to miss"?

That's actually the deal almost everybody else ends up striking with the spirits of inspiration, but not Dylan. Seen this way, it's almost sad how the Rolling Stones have burnished their act to such a sheen that the only question is which pop star Mick will pluck from the charts to help him seem relevant this time. Have they really lost their faith in spontaneity?

There were moments during Friday's concert when I started to question my faith in Bob. Was I one of DuChamp's suckers, insisting that the urinal is beautiful because someone placed it in a museum? Or, worse, had I come to idolize Dylan because it was the safe thing to do, since not even the most contrarian rock snob would dare deny his genius?

But then there were the flashes of brilliance. The bird sightings, if you will. The band gelled gorgeously on "A Hard Rain's A-Gonna Fall," and again for a brief jam toward the end of "Simple Twist of Fate." "Tangled Up in Blue," a sprawling masterpiece that, performed live, typically collapses under the weight of its own ambition, was sublime from start to finish. A few of the newer tunes sounded good, too. It was interesting to note how far "Thunder on the Mountain," from 2006's Modern Times, and "Duquesne Whistle," from last year's "The Tempest," have already evolved.

In last Sunday's New York Times, Jon Caramanica called this tour "so much the summation and apotheosis of dad-rock that no experience of dad-rock may ever match it." It's a funny line, but I'm not sure it's entirely accurate. The term "dad-rock" calls to mind a guy in pleated shorts and a baseball cap, clutching a beer, closing his eyes, and pretending he's 22 again. Dylan doesn't indulge that fantasy. Sure, he plays the songs he wrote when he was a young man, but he plays them like the old, weird bastard he is today.

In other words, despite being an incorrigible trickster as well as one of the most evasive people ever to walk the Earth, Dylan is remarkably honest in these performances. He's over 70! His voice is fucked up! He's not even that good at playing guitar, piano, or harmonica! What he's showcasing is his access to inspiration. It's sporadic. Sometimes, it doesn't happen at all.

On Friday, at least, it did happen. Duff and I agreed that it was one of the better shows we'd seen. The three hours of traffic had been well worth it.

And here's the bottom line: As long as Bob fucking Dylan is willing to play hide and seek with his muse on stage, for all to see, I'm going to keep on paying to see what happens.