San Diego Mayor Bob Filner (D), a self-described "hugger" who is facing allegations that he sexually harassed female staffers, is scheduled to be the keynote speaker at a conference on military sexual assault next month.

The National Women Veterans Association of America was initially planning to honor Filner in a "lifetime of leadership awards ceremony" for his work on behalf of female veterans. Filner served as chairman of the House Committee on Veterans Affairs from 2007-2011 before being elected mayor.

In light of the sexual harassment allegations, the group announced on its Facebook page that it will no longer be presenting him with an award. But it will still feature him as the keynote speaker at its Aug. 30-31 gala. The event will bring attention to the topic of "military sexual assault, sexual harassment and violence against women and children."

"Due to the recent events of allegations of sexual harassment, admission of inappropriate behavior by the Mayor and his personal cry for help, National Women Veterans Association of America has removed the mayor from being honored at the benefit gala to support the Military Sexual Assault Community," the group said in a press release. "He is now the keynote speaker on these injustices."

"We do not tolerate sexual discrimination at any level within our society," said the group's president Tara Jones.

Former Filner supporters have said the mayor "forcibly kissed two constituents and grabbed the buttocks and breast of a staff member," according to the Los Angeles Times. Women who work for him also reportedly refer to him as a "dirty old man."

Last week, Filner's chief of staff resigned, saying in a statement, "As a lifelong activist for women's rights and equality, I feel I must resign effective today."

Filner has said he needs to "have a greater sense of awareness" of how his actions are perceived, but he has denied any wrongdoing and said he won't step down.

When a commenter on the National Women Veterans Association of America's Facebook page criticized Filner for the allegations, the group responded that the mayor will be addressing them in his speech and that "the jury is still out."

The gala announcement on the group's page: 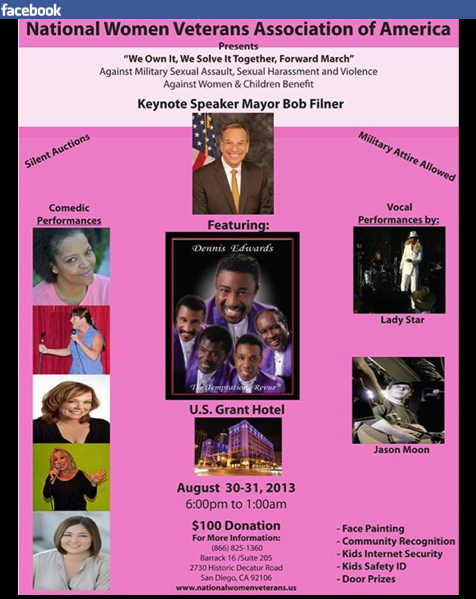 1 / 11
Mark Sanford
Hiking the Appalachian Trail. Said a staffer: “I apologize for taking so long to send this update, and was waiting to see if a more definitive idea of what part of the Trail he was on before we did so.”
Getty Images