It took a performance in a freak show for Bob Heslip to truly feel normal.

Heslip, 50, suffers from an extreme case of Neurofibromatosis type 1 (NF-1), a tumor disorder that is caused by a gene malfunction and causes non-cancerous lumps.

The disease is genetic and affects up to one in 2500 people. In Heslip's case, it causes bubble-like bumps all over his body.

"I don't feel a lot of pain from the bumps," Heslip told The Huffington Post. "I have a large bump on the side of my body that used to be very sensitive, but not so much now."

Heslip has felt other types of pain, according to friend Todd Ray, who employs Heslip at the Venice Beach Freakshow on weekends.

"Bob works at a Dollar Tree in Tucson, Arizona, and he says some people will see his hands and not want him to touch any items because they think he's contagious," Ray told The Huffington Post. 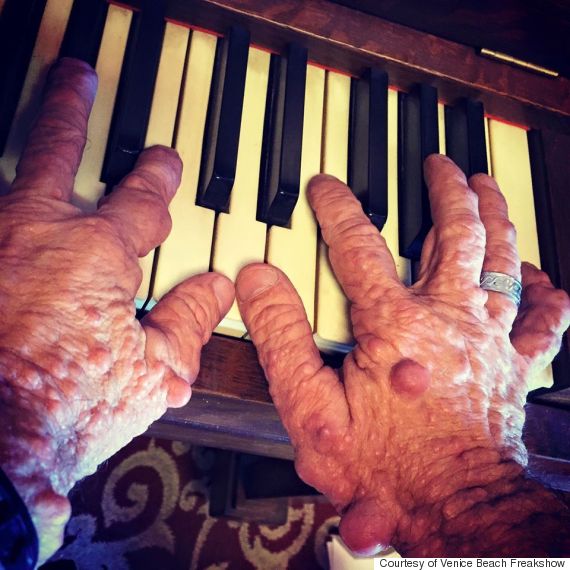 The tumors first started showing up on Heslip's body around puberty and have become more severe as he has grown older.

Surgically removing the tumors is not an option, because, Heslip said, "There's no guarantee they won't grow back, or come back larger than before."

Some people with NF-1, like Chandra Wisnu of Indonesia, hide away from public view, but with three kids and a wife to support, Heslip doesn't have that option.

"I know I get people staring at me," Heslip told HuffPost. "But I live in Arizona. If I wear long sleeves, I'll pass out with the heat." 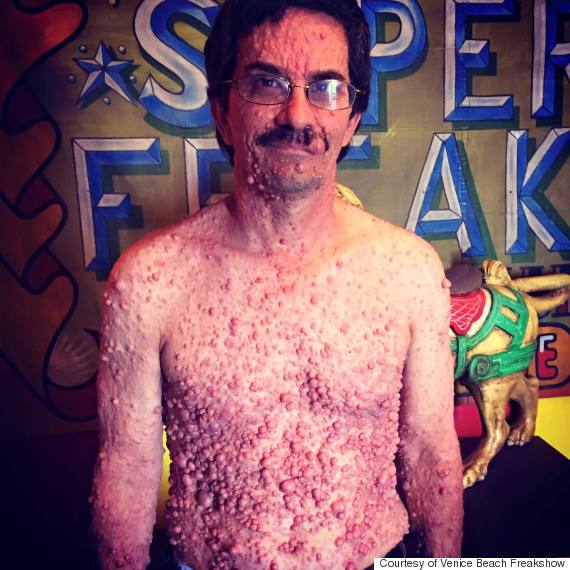 Thanks to the Freakshow, Heslip is tossing away his worries like he tosses away his shirt.

"It started about 7 or 8 months when I was vacationing with my family in Los Angeles," Heslip said. "We were at the beach and saw the Freakshow. My daughter is a fan of the TV show and I had watched it before. We saw the bearded lady."

Ray, the owner, saw Heslip and recognized the bubble-like skin as NF-1 and the two started talking briefly.

Then as the crowd gathered to watch the outside show, Heslip saw performers who, like him, were each unique in their own way. There was a bearded lady, the smallest married couple in America, a man covered completely in hair, and he felt comfortable in his own bubble skin for the first time in his life.

"I went to the front, took off my shirt and the crowd went crazy!" Heslip said. "When I met the performers, there was a feeling of belonging. I felt at home."

Ray invited Heslip to join the show as the "Bubble Boy," and he finally decided to do it a few weeks ago.

It's been a challenge making it work with his work schedule at Dollar Tree, but Heslip feels it's the right decision for him because it gives him a vehicle to explain his condition to people who otherwise might just stare.

"I want to teach people that it's not taboo to ask questions. I'm OK talking about it," he said. "My son and oldest daughter also have this condition and my speaking out about it gets them excited. They know my attitude is positive." 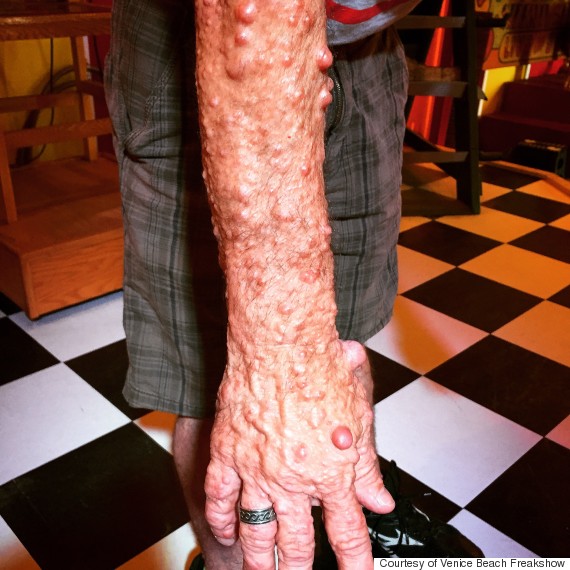