My sister's first boyfriend was a gorgeous half Indian half black boy with dreadlocks. Our dad wouldn't let him come past the front gate. In Jamaica in the mid 70's, teenage daughters of upper middle class families from St. Andrew did not date boys with dreads, even if they also came from a good family. Many similar families had at least one son who had gone the way of Bob Marley. Dreadlocks, Rastafari, ganja and reggae music.

I was just a little girl peeping around the corner when my sister had to stand on one side of the fence while "the very cute dread" stood on the other making goo goo eyes. Being a dread was not cool. But as with all things, time mellows us and provides the backdrop for genius unappreciated. Bob Marley has long since emerged as the iconic voice of Jamaica and over time, before and after his death, has taken our magical "small island with a big personality" brand, international. We Jamaicans are beyond proud to call him our son and to use his ONE LOVE melody as our unofficial national anthem.

While Bob is unquestionably Jamaica's most famous native internationally, the notion that every Jamaican was in love with Bob from the beginning is just not true. He was from the streets, his way of life rebellious and his music was poetry that many professionals who were busy building a newly liberated island just didn't have time for. In those days most Jamaicans were trying to follow the example of England, the mother country, by striving to be better educated and upwardly mobile. They were not focused on the dwindling opportunities for those not fortunate enough to climb the social ranks. Many Jamaicans did not embrace him until he gained international fame by successfully taking his music to white audiences in Britain and wider Europe. Bob Marley is arguably the world's biggest socio-cultural icon; TIME Magazine named his 1977 album, Exodus, Album of the Century 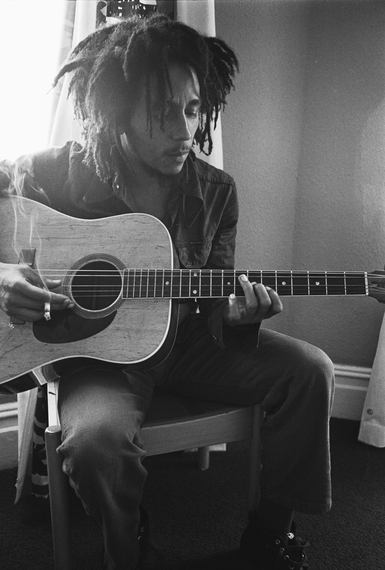 Photo courtesy of The Grammy Museum

My Dad told me that in 1972 he was in Half Way Tree/New Kingston with my older brother Gladstone, who said "Wow, look there's Bob Marley in that BMW!" My dad replied "Who's Bob Marley?" (Fun fact: Bob loved BMW because it shared the group's initials, Bob Marley & the Wailers)

My brother, then a teenager, now a very successful doctor, said Bob epitomized the transition from rock steady to reggae. Gladstone says that for him, Marley's most prophetic words were "Don't gain the world and lose your soul, wisdom is better than silver or gold."

Marley's mystique has inspired many love fests though movies, documentaries, articles, websites, festivals and hundreds of artists who have tried to replicate his message.

Among the best of them, the official Bob Marley MESSENGER Exhibition has chosen to make its last stop Miami, considered "Kingston 21" for the masses of ex-pats who have emigrated to South Florida. The MESSENGER exhibition, now at HistoryMiami until January 5th, 2014, is a stunning portrayal of all of Bob, in all of his iterations. The poor country boy, the soccer player, the poet, the musician, the husband, the peacemaker, the performer, the ladies man (he has eleven "acknowledged" children with several mothers, yet he was only married once) and the global superstar. 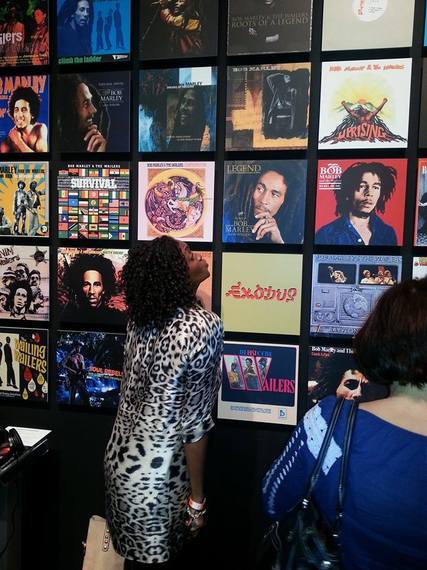 Curated by the Grammy Museum at L.A. Live, where it launched then moved to London during the 2012 Olympics, the show offers an intimate experience where, from the very beginning, you're on the journey with Bob. Personal photographs courtesy of The Marley Family include the tiny early childhood home at Nine Mile, a portrait of his mother, his Peace Concert where he attempted to stop the brewing civil war between Jamaica's political parties, the JLP and the PNP, by bringing party leaders Edward Seaga and Michael Manley on stage to join hands. And there are plenty of photos of his omnipresent beloved soccer games. On display his famous Les Paul guitar, the understated denim shirt he usually wore on stage and typical garb of the Rastafarian faith. Bob had sooooo many albums and they're all on the walls of the exhibit, above a set of headphones that invite you to mix your own reggae music with Marley inspired beats. Floor to ceiling photos of this man with his super model bone structure and signature dreads flung back. A series of fascinating videos that include enthusiastic South Florida fans and famous Bob followers Carlos Santana, NAS, and Jason Mraz, along with a look into his relationships with his children from son Ziggy and daughter Cedella

Jamaican attorney Marlon Hill is excited about the exhibit making its last stop in Miami before returning to Nine Mile. "Popularity and wealth have a way of eliminating any negative stigmas in all cultures, particularly the Jamaican culture with Bob and Rastafarianism. Jamaica is only 50 years old, still trying to mold its personality as a culture, says Hill. "Reggae music is that vehicle that has allowed the rest of the world to understand the personality of Jamaica. From roots rock, mento, ska, reggae and now dancehall, Jamaica has secured its place in global culture."

Walking through the Bob Marley Messenger exhibition I was moved by the ordinary origins of this prophetic soul who transcended race, culture, class and heritage.

In the words of Bob Marley "one good thing about music, when it hits you, you feel no pain".