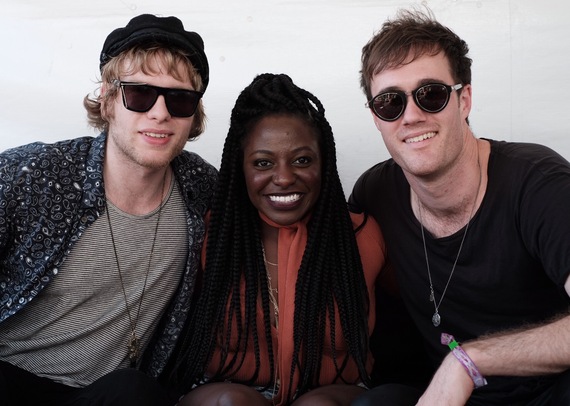 To sit with the talented duo-- Bob Moses is insightful to say the least. Jimmy Vallance and Tim Howie's allure extends beyond the stage which they illuminate within each show. That illumination grabbed the attention of fans at this years Coachella Valley Music Festival. Our conversation which took place for a mere 10 minutes, felt like seconds that diminished like an outstanding dessert. As we sat on the sofa in the press tent, our conversation is sure to inspire you to remain dedicated, have fun with your life and hope Ellen Degeneres hears your music in her car as well.

I loved you guys Ellen Performance, I thought it was quite-ill. I love how she was driving in her car and said "who are these guys and then thought get here now".

BM: The whole thing was just like such a trip. That was it, she literally did that--it wasn't a lie. She heard us in the car and was like I have to have them. We were in Brazil touring- on the way from the airport to our hotel or something. It was like we did 5 or 6 shows in a row down there and were like flying around a lot --we were tired. We played that night at like 2am then went straight to the airport and flew to Chile played there and then flew back. Then we get the text that Ellen wants us to come and we were like, "Oh for her birthday episode"? So, it was like Ellen wants you to come play her birthday. Were like, "Oh so like a private party for Ellen's birthday"? Thats awesome! Then they were like No, the show and we were like your kidding me wow!

MM: I want to take it back even further. Further than Ellen, further than all of that. I really resonated with a quote that I read Jimmy say, " I was working in construction and I figured, If I'm working this hard at this why not work this hard at music and only take that yes".

BM: Yea, I was working for my Uncle my parents were like ok, you're 14 your going to help your Uncle build his house. We did like a construction demolition to the house and all that stuff. We demolished and basically built is back up and I learned so much doing 12 hour days. Starting from like 8am to 8pm sometimes later and I was like this is hard, this is hard work and I was getting paid like $8 an hour. I was just like what if I like work this hard at something else. Around that time music became like, Oh I like playing music and I want to make it a job.

MM: I love that you guys are high school friends that molded this into a living, breathing amazing career. At what point did you realize that we can have a tangible business so to speak?

BM: Well, I remember it was a few years ago. It was in October! We played Burning Man for the first time in September--it was amazing. Then at the end of September, or October 1st or something our second EP came out and they released our Robot Heart set. October was the first month I was like " wow, ok we've had to turn down gigs. I'm making enough money this month to not worry and go to dinner whenever I want so that was like the turning point.

MM: That was the shift?

BM: That was the shift where, we were getting booked every Friday/Saturday. That started to happen in different places you know. That was step 1 and then it was like awe man so then you play on the weekend and then its like when else. So then we started to get booked on Thursday's then all of a sudden it was Wednesday then next thing you know, every night's a Friday.

MM: Are you in a place now, where you are dreaming bigger? Or, are things happening so fast that you're just rolling with everything?

BM: I mean, we've had like a certain goal from the beginning and we are working our way through that. It's really actually beautiful to see that. I sort of have deja vu moments where like something happens and I'm like whoa. Actually like on Wednesday or Thursday we opened for Underworld. We played in this beautiful theatre and I have this recurring dream of when I was a little kid of a theatre just like that and coming out to the lights and being in a theatre like that and the crowd noise. I use to have it all my life and when we walked out on that stage, I was like wow deja vu. It's happening! When we had the rehearsals with the drummer we rented this really awesome rehearsal space for a couple of weeks. We were there everyday. Alice and Chains were next door and we heard Guns and Roses rehearse. We were in the room with the drummer, we were like sitting on the couch chilling looking at the drum set. Looking at this amp and Tom goes--"Dude this is everything I dreamed about since I was kid". You lose sight of it sometimes you know. Sometimes you just sit back and go this is so cool. It happens so fast that you just feel like you're playing catch up. But then you get these beautiful little moments where you step back, you could be working --just something hits you and you have a moment like whoa this is happening. The first time we sold out Paradiso in Amsterdam which is this 1500 person beautiful old iconic venue, I just remember going to bed glad that day like this is actually happening. Touring every weekend and playing to like clubs and stuff is awesome but there are these certain moments that are starting to just happen now within the last 5-6months thats like really incredible. I was joking with our drummer cause, last night was the first night that we played with him--and I was like man ever since we added a drummer I feel like we really made it.

MM: So like whats your next, are you still in that moment of "oh wow--we made it with a drummer"? Do you have another pivotal moment to happen?

BM: We have only had one show with the drummer so today we want to work that out more. Basically Tom and I its like our show and we hired a drummer and now its like lets build the show from the ground up with that in mind.

MM: Yet, with this already established platform. So you are not working totally from zero?

BM: No, yea not at all. Well you gotta try and push it keep it interesting cause its so fun. We want to play bigger venues. Reach more people were both really excited about our next album because we have been touring so much that we're not getting that creative scratch itch so to speak. The goal now is to like continue it stay true to what we have wanted to do since the beginning and the identity that we have created for ourselves. Write the best stuff we possibly can in our field and like push ourselves creatively and just like hope that we write stuff that is 100% real to us and that also translates. I feel like the further we get into this and the more honest we are and write music we like and we just don't do it because we feel like we have to. If we look back its like the more we have done that the bigger its gotten. Whenever we have had the most fun--that's when everyone else has had the most fun. Like last night we were just like having a blast and it translated you know.

MM: Well this moments translating. I knew you guys were great but seriously there is just a warmth and a genuine dynamic to you. I am so bummed we gotta go right now, yet this will not be our last feature.

MM: I thank you so much.

BM: No, thank you really!

Keep up with Bob Moses at http://bobmosesmusic.com

Tune in for more Exclusive Interviews with Melissa Mushaka at
http://www.melissamushaka.com