Bob Ross, patron saint of happy little trees, harbored a deep, dark secret. He loved clouds. He loved streams. He loved squirrels. But he did not love his hairdo.

Nope. That spherical helmet of coiled locks, the one that rested atop his head each and every episode of “The Joy of Painting”? He hated it. He hated every twist and turn his tresses took. But what’s even more shameful (but, let’s be real, very obvious) about his hair hatred? Those curls he loathed aren’t even real.

As NPR tells it, Ross ― freshly retired from the Air Force ― was in the midst of a career transition when he settled on his very specific hairstyle. He’d yet to break into the hard and fast industry of televised painting instruction and was a little tight on cash. So, acting according to some mighty questionable logic, he got a perm in order to avoid ever having to pay for a haircut again.

“He got this bright idea that he could save money on haircuts. So he let his hair grow, he got a perm, and decided he would never need a haircut again,” Ross’ former business partner Annette Kowalski explained to NPR.

Like most hair-related decisions, Ross came to regret his chemically-treated ‘do. Alas, before he could change it, that murky brown globe became his signature look. So much so that his company decided to use it in its logo. As a result, “he could never, ever, ever change his hair, and he was so mad about that,” Kowalski said.

Let us take a moment of silence to remember the perm that might never have been. Because a show starring this guy ― reciting the words, “You can do anything you want to do. This is your world.” ― just wouldn’t have been the same:

Bob Ross before his trademark fro. circa 1970

You can read the entire Bob-Ross-themed interview with Annette Kowalski over at NPR.

Bonus: Here’s our story on the woman painting her way through “The Joy of Painting.” And as always, if you need a little Bob Ross R&R, he’s streaming on Netflix, YouTube and Hulu. 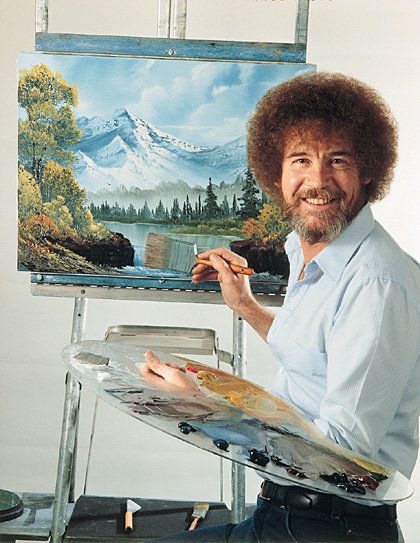