In 1982, management consultant and former competitive figure skater, Sharon Monsky was diagnosed with scleroderma (in Latin "hard skin") a rare, potentially fatal disease that hardens the skin and internal organs and often strikes women of child-bearing age. Given two years to live, Sharon was shocked at how few, even in the medical community, were aware of the disease. Her response was to make possible what seemed impossible. She applied her business expertise to found the Scleroderma Research Foundation (S.R.F.), which, to date, has raised over 35 million dollars and provided medical breakthroughs through tireless research, and new medications. Sharon lived two full decades after her original prognosis, passing away in 2002 due to complications from scleroderma.

When Sharon started S.R.F. in 1987, she enlisted her talented chef friends, Susan Feniger and Mary Sue Milliken, who agreed to use their popular L.A. restaurant for a comedy fundraiser for scleroderma. The first comedian who agreed to do the benefit was Robin Williams (a regular of Feniger/Milliken's restaurant) who played to a room of about 150 people. The scleroderma benefits grew in scale and became known as Cool Comedy -- Hot Cuisine, a fantastic annual event (in New York, San Francisco and Los Angeles) with the nation's top comedic and musical talents performing along with Feniger and Milliken's multi-course feasts. Williams did the show seven times.

During S.R.F's early years, Grammy-nominated comedian/actor/author/producer/director Bob Saget, joined the party as a featured comedian because: "Sharon took my heart -- and nobody could say no to her." Little did he know that in a few years, his own sister, Gay, a healthy English teacher in Bucks County, Pa., would be diagnosed with scleroderma, and would pass away from the disease in 1994. 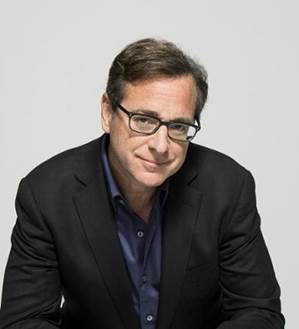 I had a great conversation with Saget, on the S.R.F. Board of Directors for over 10 years now, and host of the Cool Comedy -- Hot Cuisine fundraising galas.

Xaque Gruber: I read that your sister was initially misdiagnosed. The doctors, even in the early 1990s, weren't that aware of scleroderma.

Bob Saget: My sister, Gay Saget, and if you think that's an easy name to grow up with -- it's not. She taught English to gifted and talented students and she came down with something. She was misdiagnosed over and over -- and treated quite badly by some doctors. Some suggested she had mental problems. Scleroderma is a chronic autoimmune disease but it also has a vascular component, which means it's circulatory. The body physically attacks itself and scar tissue can form just about everywhere with disastrous effects. The doctors initially thought Gay had lupus, another said it was Epstein-Barr. And then her fingernail started to deteriorate, and her extremities started to turn blue. If I knew anything then, I would've taken it to her to a top rheumatologist at Johns Hopkins.

XG: You directed the 1996 ABC Television Movie, For Hope, inspired by your sister's life story. What motivated you to tell her story in this way?

BS: It was Lori Loughlin from Full House who said "you're a really good director, you should make a film about Gay." My sister had just died, and so I did it. Sharon Monsky is in the film as well. For Hope starred Dana Delany who shortly thereafter joined the S.R.F. Board of Directors. 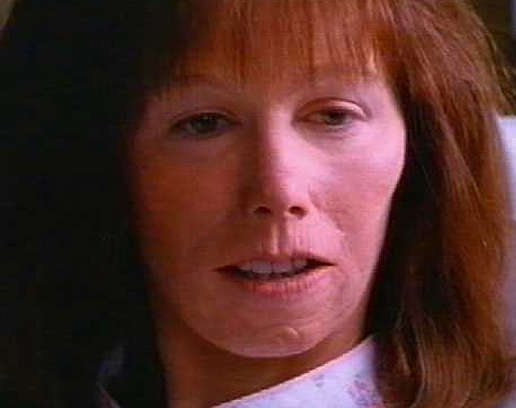 Dana Delany in For Hope (Photo courtesy of AEFPR)

XG: Is it true that scleroderma strikes a disproportionate amount of African Americans?

BS: Yes, African Americans and younger women in general. There are many people out there who have elements of the disease and are undiagnosed. For me, with all the great work being done and medical breakthroughs happening, the glass is half full instead of half empty. When you cure one of these diseases, it opens up the opportunities for breakthroughs with other diseases.

XG: Can you manage living with Scleroderma like you can diabetes and other manageable diseases?

BS: Yes, I know quite a few people who live their whole life with it. I've even met a few people who, through the grace of the universe or through diet, can say the disease is not progressing anymore in them. You become very very cold with the disease, your gums recede, the flap on your esophagus loses some of its elasticity. Your body ends up creating more collagen, and you would think that it would give you more elasticity, but it doesn't. Your skin hardens, and it can be disfiguring, but not always. 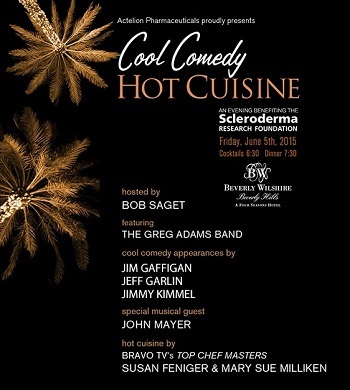 BS: The next one is in L.A. on June 5th at the Beverly Wilshire Hotel. This is a very special one -- Jimmy Kimmel is doing the auction with me. We have really great auction items including tickets to the Dodgers Game front row between home plate and first base and I'm going with the winners. And I know I'm going to be hit by the ball (laughs). And after that auction, we have a match grant. I emailed Jeff Garlin and asked him if he'd like to come to Cool Comedy -- Hot Cuisine and sit next to me with his wonderful wife Marla, and he said "only if I'm performing." So he'll be doing comedy. And June 5th is Jeff's birthday so that shows what kind of friend he is. Jim Gaffigan is coming in from New York for this. My friend John Mayer is going to sing songs at the end. My friend John Stamos will be there. The food is a five or seven course meal. And we'll also have a full orchestra on the stage so it will feel like a ballroom. In keeping it all in the family, my nephew, my sister Gay's son, Adam, is the event's planner. It will be an emotional and wonderful night.

BS: Dr Luke Evnin, who has the disease, is a brilliant, wonderful, forward thinking leader -- he took over when Sharon died. I'm very honored to call him and his wife my friends. We have some new scientifically minded board members and its been a great year for us. There's no way to solve a disease like this without a machine behind it -- and the machine is science. And here we are over 25 years later. I've lost a sister and I've lost a bunch of friends. It's a big desert we've crossed together for a long time.

Much like Sharon Monsky did in the 1980s, Bob Saget has applied his passion and talent in the wake of a devastating personal loss, and has made a magnificent and lasting difference in the world.