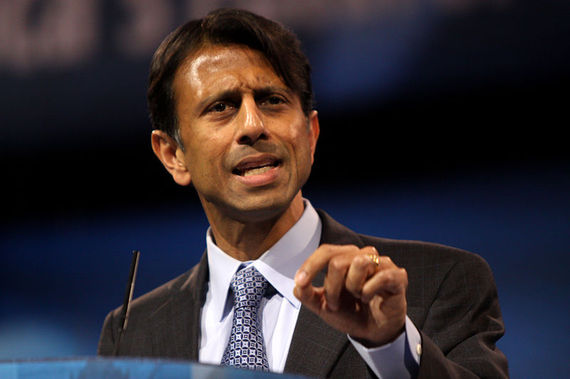 Bobby Jindal wants to be relevant. Yes, he wants to be president, but given where the soon-to-be-former governor of Louisiana stands in recent polling, Jindal needs to make sure he can walk before he can seriously run. After previously trying to be the sensible Republican who criticized those within the party who say "stupid" things, he's now gone ahead and abandoned that anti-stupid position.

You see, Jindal is quite perturbed at the fact that, in Indiana and Arkansas, corporations forced fundamentalist conservatives to back down from their attempts to enshrine in law the absolute right of anyone to deny gay people equal treatment if doing so would offend their religious beliefs. Jindal has decided that the way to differentiate himself from the rest of the Republican presidential field is to show that he is more loyal than anyone else to his Christian conservative beliefs, and especially more loyal to them than fellow governors Pence and Hutchinson of Indiana and Arkansas, respectively. That's why he's more excited than ever to support the kind of "religious liberty" bill from which those states ultimately turned away. Jindal clearly thinks that he can be the most Christian conservative of them all, and then, just maybe, he can actually gain some traction for his as-yet-undeclared campaign for the White House.

That's the context for the op-ed piece Jindal wrote for Thursday's New York Times. One must read the whole thing in order to truly appreciate his, er, passion on the issue. But his overarching theme is that the business community was wrong to bring pressure against this kind of legislation, and that they should "stand shoulder to shoulder with those fighting for religious liberty" against those who expound a "misguided, government-dictating ideology." That's how Jindal characterizes those "left-wing activists" and "radical liberals" who support those radical, liberal principles of equal rights for and equal treatment of all citizens.

Yes, we know that LGBT folks aren't a protected class according to current federal law or in the laws of most states, but I'm arguing on moral and ethical grounds here, on the grounds of what the law should be. Given that one cannot refuse to serve customers because of their race or, ahem, religion, then one should also be precluded from refusing to serve customers because of their sexual orientation.

And -- since we're puncturing false equivalencies here -- requiring people to bake a cake for a same-sex wedding, so long as we're talking about essentially the same product they'd produce for any other wedding, is not the same thing as forcing, for example, a Jewish baker to bake a cake that says, "Hitler was right," for a Nazi wedding. (Do such things even exist?) Why not? Because that baker presumably wasn't making "Hitler was right" cakes for other weddings either. Businesses can choose what products they make or sell, but they shouldn't be able to discriminate when it comes to who can buy them.

Having taken apart Jindal's false definition of religious liberty, I want to explore another part of his piece that really galled me. First, he went all in on the "corporations are people, my friend" quackery put forth by the likes of Mitt Romney:

Why shouldn't an individual or business< have the right to cite, in a court proceeding, religious liberty as a reason for not participating in a same-sex marriage ceremony that violates a sincerely held religious belief?

You know when they should have that right, Bobby? When I see a business frog-marched on a perp walk after having been convicted of a crime. That's when. Businesses aren't people, and they don't have beliefs. But that wasn't all. Here's what got me even more worked up:

As a nation we would not compel a priest, minister or rabbi to violate his conscience and perform a same-sex wedding ceremony. But a great many Americans who are not members of the clergy feel just as called to live their faith through their businesses.

I try, as a rule, to maintain a certain standard of professionalism in my writing. In this case... OMFG. While I compose myself, take a look at what Justice Ruth Bader Ginsburg wrote in her brilliant dissent in the Hobby Lobby case, which also pertains to the above quotation from Jindal. Ginsburg decried the decision because, echoing Jindal's thinking, it "holds that commercial enterprises, including corporations, along with partnerships and sole proprietorships, can opt out of any law (saving only tax laws) they judge incompatible with their sincerely held religious beliefs."

Such an approach, says Ginsburg, "forgets that religious organizations exist to serve a community of believers. For-profit corporations do not fit that bill." She also cites a prior Supreme Court verdict to make the point that "for-profit corporations are different from religious non-profits in that they use labor to make a profit, rather than to perpetuate [the] religious value[s] [shared by a community of believers]."

There, I'm feeling a bit better. The wisdom of RBG does have a calming effect. To address Jindal specifically, I'd add that his claim that baking cakes or taking pictures -- for a profit -- is how people "liv[e] their faith" is absurd. Living one's faith in Christianity, I would argue, means carrying out the kinds of principles so many of us, no matter our religion, have always admired in Jesus' teachings: charity, compassion, love. Pursuing a profit? On that, I'll cite Matthew 6:24:

No one can serve two masters, for either he will hate the one and love the other, or he will be devoted to the one and despise the other. You cannot serve God and money.

More than absurd, Jindal's attempt to connect business and religion, specifically Christianity, reflects a cynical, right-wing talking point that conservatives have pushed going back to the 1930s -- when laissez-faire conservatism was under attack for having caused the Great Depression, and businesses sought to promote "a new ideology that combined elements of Christianity with an anti-federal libertarianism."

It's worth noting that Jindal, in addition to his primary focus on making sure fundamentalists can live their faith by treating the gays as second-class citizens, also used the platform of The New York Times to claim that "since I became governor in 2008, Louisiana has become one of the best places to do business in America." The reality is somewhat different. Although it did perform better than the U.S. as a whole during Jindal's first year in office, by the time his policies actually took effect (i.e., from 2009 through 2013, the most recent year for which data is available), Louisiana's economic growth lagged behind that of the national economy pretty badly. (Data for 2009 through 2012 can be seen here, and 2013 here.) As for job creation, from January 2011 through January 2015, Louisiana came in 32nd out of 50 states -- but, hey, that was three spots better than Scott Walker's Wisconsin! Additionally, Jindal turned the $1-billion annual surplus that greeted his first inauguration into a deficit now projected to be $1.6 billion for next year. Hey, that does sound a lot like another Southern governor who rode a coalition of business and religious conservatives to the presidency. But I don't think Jindal wants to draw too many parallels between himself and George W. Bush.

Back to religious liberty. I respect religion. I recognize that for many people it is more than just important; it is the thing that defines them. People have every right to believe what they want, to worship how they want, and to practice their faith according to the tenets and traditions they hold dear. What I don't respect is people, like Bobby Jindal, who attempt to use religion for political gain.

Beyond politicians, what I also don't respect is people who attempt to use religion to hurt someone else. You don't like gay marriage? Fine. Don't get gay-married. But if you want to have a business and operate in the public sphere, then you've got to treat all your fellow citizens equally. Even better would be to treat each of them as you would wish to be treated. That's a rule that should sound familiar to someone as knowledgeable of the New Testament as Bobby Jindal. I know it's a rule by which I strive to live.