For the last four years, Louisiana Gov. Bobby Jindal (R) has championed the set of learning benchmarks known as the Common Core State Standards -- but a simmering mess of litigation in the state's court system shows that Jindal has moved as far away from his previous position as he can.

Last week, a group of parents, teachers and charter school managers sued Jindal over his recent repudiation of the Common Core. Jindal's decision to cut ties with certain testing vendors who create Common Core materials has left some Louisiana schools lacking critical resources as the beginning of the academic year approaches.

On Tuesday, the Louisiana Board of Elementary and Secondary Education (BESE) voted 6-4 to join the lawsuit against Jindal, known as Navis Hill, et al., v. Louisiana State. The litigants are seeking a preliminary injunction that they hope will allow the state to continue its plans to administer Common Core exams in the upcoming school year, which starts in as little as a week in some parishes. A hearing is scheduled for August.

Meanwhile, also on Tuesday, Jindal took some legal action of his own, filing a countersuit with the aim of invalidating the Memorandum of Understanding that Louisiana signed in 2010. That memorandum made the state a member of the Partnership for Assessment of Readiness for College and Careers (PARCC), one of two federal consortia that design Common Core tests.

"Governor Jindal now has a much clearer understanding" of the Common Core tests, said Faircloth, who called the tests "a stalking horse for the federalization of education policy."

Although Jindal had previously championed the Common Core, he turned against it this summer, declaring it an unwelcome intrusion on the part of the federal government.

Though the state's legislature has upheld the Common Core, Jindal demanded that the state drop it, and suspended the state's contracts with testing vendors who create Common Core tests.

BESE president Chas Roemer said the current legal battle "is a constitutional question ... that is making sure we preserve our right to make these decisions."

Roemer called Jindal's countersuit a political strategy to distract from the school board vote. "It's called politics 101," he said. "They wanted to make sure you had more than one thing to write about ... They have no interest in a resolution. None."

The Common Core is a set of learning benchmarks in math and English language arts adopted by over 40 states that tell teachers what students need to know by the end of each grade. Recently, the standards have attracted controversy from parties as diverse as mothers concerned by abstract and different homework questions, tea party networks railing against what they see as federal overreach, and teachers' unions decrying hobbled and rushed implementation. Several states have dropped the Common Core, although some, such as Indiana, have replaced them with similar standards by a different name.

A few years ago, Jindal visited a charter school run by one of the Navis litigants to proclaim the Common Core's importance. But after a year of protracted fighting with the federal government over Jindal's expansion of school vouchers in Louisiana, the governor changed his tune.

In May, he compared the Common Core to centralized planning in Russia. In June, he wrote on Twitter that he would "not be bullied" by the feds, and that Secretary of Education Arne Duncan's "comments & actions" prove that the Common Core is indeed a "fed takeover." Duncan accused Jindal of playing politics with education.

Jindal's filing includes a section that describes the Common Core as "good intentions co-opted by federal coercion," characterizing the federal government's Race to the Top competition as "effectively compel[ling] states to adopt a single, nationalized, state of standards." (Technically, Race to the Top, which took place during the first term of President Barack Obama, rewarded points to states for adopting college- and career-oriented common academic standards, though it did name the Common Core. Jindal has praised the initiative in the past.)

Despite signing the PARCC agreement in 2010, Jindal now characterizes it in his lawsuit as "effectively subject[ing] citizens of Louisiana to binding education policy developed by a private non-Louisiana entity." Therefore, according to the suit, "the Common Core goal of creating 'voluntary' standards to assist states has been lost." Faircloth said he thinks the suit will "unmask PARCC."

After turning against the Common Core, Jindal sought to pull out of PARCC, but the agreement he signed said the state could not leave the consortium unless its original signers agreed on Louisiana's departure -- which they do not.

Now, Jindal argues in the countersuit that the law prohibits delegating authority to a "non-public person or entity," and that the PARCC agreement is therefore invalid.

"There really is no effect whatsoever of what the administration is seeking here," said White during a call with reporters.

Later, White clarified in an email to HuffPost that while PARCC is a grant that funds test development, that development period is now over, and "there is nothing forcing" Louisiana schools to use those test questions in the future.

"Ending the agreement either prevents something from happening that's already happened, or prevents us from being made to do something no one is making us do," he told HuffPost.

Regardless of the contract technicalities, it's clear the fracas has thrown educators into chaos as they prepare to open their schools for the new academic year.

"This is a war on teachers, and today I sit and instead of getting an answer about what happens on Monday, you guys are going to court and suing the governor," said Candyce Watsey, a teacher in St. Tammany Parish, addressing the school board Tuesday during the meeting where administrators voted to join the suit against Jindal. "What am I going to tell my students?"

PHOTO GALLERY
Bobby Jindal On The Common Core Over The Years 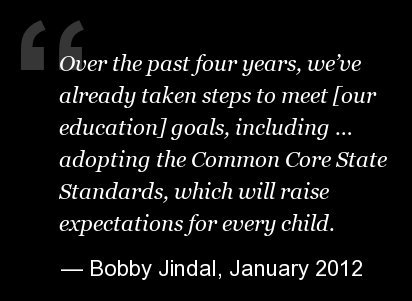