Because Richard Nixon earned the reputation as "Tricky Dick" and was later associated with the Watergate scandal, many Americans mistakenly believe that Republicans have a monopoly on dirty tricks. They don't.

Consider the latest flyer put out by Bobby Shriver, who is running for the LA County Board of Supervisors against fellow Democrat Sheila Kuehl. The flyer has a huge photo of Zev Yaroslavsky, the popular incumbent supervisor in District 3 who is retiring due to term limits. Above and below that photo, Shriver's campaign concocted this statement: "Who Shares His Values?" 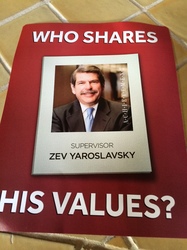 Turn over the flyer and it reads: "Bobby Shriver Does."

Does that sound like Yaroslavsky has endorsed Shriver? That's obviously what Shriver wants you to think. But it isn't true. So why is Shriver resorting to these deceptive campaign tactics?

He's desperate. Despite outspending Kuehl with money from big corporations, big developers and his own deep pockets of inherited wealth, Shriver is realizing he can't outsmart or out-campaign his opponent. So he's slinging mud and getting his supporters to join him in the mud-fest. Exhibit B is a recent Huffington Post column by Shriver backer Bob Shrum, a veteran Washington, D.C. campaign consultant.

It is obviously only a coincidence that Bobby Shriver's initials are BS, but that's exactly how to characterize Shrum's embarrassingly misleading diatribe against Kuehl.

Shrum moved to LA last year after living in Washington, D.C. for four decades and in New York for the past nine years. This, of course, makes him an expert on what Los Angeles County needs.

Although he wasn't around at the time, he attacks Sheila Kuehl for being a "career politician." This comes from a guy who titled his self-serving autobiography, No Excuses: Concessions of a Serial Campaigner.

Ironically, Sheila Kuehl is not a lifetime politician. She's been a successful public interest lawyer, a college dean and professor, and a grassroots activist. When she ran for the State Assembly and then the State Senate, she won every time, because she had the support of the environmental movement, progressive unions, women's rights and LGBT activists, and others whose causes she advocated before, during, and after her 14 years in the legislature.

Perhaps Shrum is motivated by sour grapes. After all, as a consultant to eight presidential primary and general campaigns, his candidates lost every time.

Shrum's biggest claim to fame is as a speechwriter, and he's a damn good one. So perhaps he could use those skills to help Bobby Shriver say something different than "I'm with the Chamber of Commerce."

Back in May, this is what the Los Angeles Times had to say about Shriver:

While pursuing the admirable goals of serving veterans or ending homelessness, Shriver has too often gotten in his own way, needlessly antagonizing colleagues, city workers and others. His prescriptions for county government too often come in the form of blurts that show too little evidence that he understands the complexity of the county's challenges and possible solutions.

And when the Times endorsed Kuehl earlier this month, it wrote:

Of the two candidates for the Board of Supervisors' 3rd District seat, the one who best embodies the qualities needed for the new era is Sheila Kuehl. The Times recommends Kuehl in the Nov. 4 election. Kuehl brings a solid understanding of the problems in the jails, in foster care and in other aspects of the county's work that is nearly unparalleled for someone not already working in the county arena. That's in part because she has devoted much of her life to championing people in need and on the margins of society -- precisely the people county government is intended to serve. And it is in part because Kuehl served 14 years in the Legislature, mastering the intricacies not just of policy but of subjects as mundane yet crucial as funding streams and federal regulations and waivers.

Shrum's main argument for supporting Shriver is that he "wants to reform regulations and reduce bureaucratic obstacles to economic development and job creation." Translated into English, that means he wants to weaken environmental rules (such as the landmark California Environmental Quality Act) that have been extremely successful in reducing pollution and improving public health in LA County, which once had the dirtiest air the country. This is yet another example of how Shriver echoes the Chamber of Commerce's line about how laws to protect children, seniors, and the general public from corporate pollution is a "job killer." There's absolutely no evidence for this but it makes the Chamber and the big developers happy to have Shriver and Shrum repeat it.

Current Santa Monica City Councilmember Gleam Davis served with Shriver on that body for more than three years. In an open letter, she wrote:

Bobby decided to run for City Council because he was angry that the City's enforcement of its hedge ordinance would require him to trim the hedge around his home. Before the hedge issue came up, he never had shown any interest in local politics or local issues. He spent hundreds of thousands of dollars of his own money on his campaign. No one in our small city had ever seen that kind of personal wealth spent on a City Council race.

In contrast, the entire trajectory of Kuehl's life reflects her commitment to jobs and justice. Born into a working class family, Kuehl was a successful child actress but wanted to pursue other goals. She graduated from UCLA, became an Associate Dean of Students there, then went on to the Harvard Law School, where she was the second woman in the school's history to win the Moot Court competition. Returning from Harvard to Los Angeles, Kuehl taught at Loyola, UCLA and USC law schools and co-founded the California Women's Law Center where, as managing attorney, she drafted and fought to get into California law more than 40 pieces of legislation relating to children, families, women, and domestic violence.

Kuehl made headlines when she was elected to the California state Assembly in 1994 as the first openly gay or lesbian member of the state legislature. During her six years in the Assembly (where she became the first woman to serve as Speaker Pro Tempore) and eight years in the Senate, she made her name as a tireless and effective advocate for working families.

She authored 171 bills, signed into law by three different Governors, including legislation to establish paid family leave, establish the rights contained in Roe vs. Wade in California statute, overhaul California's child support services system; establish nurse to patient ratios in every hospital; require that housing developments of more than 500 units have identified sources of water; further protect domestic violence victims and their children; prohibit discrimination on the basis of gender and disability in the workplace and sexual orientation in education; increase the rights of crime victims; safeguard the environment and drinking water; and many, many others. She led the fight in the legislature to achieve true universal health care in California.

She was repeatedly voted the "smartest" member of the California Legislature. She received the 1993 UCLA Award for Community Service and the 2000 UCLA Award for Public Service, among many other honors.

Even Maria Shriver, who has understandably endorsed her brother Bobby, praised the paid family leave bill that Kuehl sponsored and championed through the legislature.

"Since the law's passage, research has confirmed that paid family leave offers real and lasting benefits both to families and to employers," Maria Shriver wrote last summer in the Huffington Post. "Mothers and fathers are getting increased bonding time with newborns. Breastfeeding rates have almost doubled for mothers who take leave. There are lower rates of postpartum depression, and health outcomes among children have improved. Perhaps most important, as we pointed out in the Shriver Report, programs such as California's PFL law can boost employment and family income by allowing parents to go back to work at their old jobs after taking family leave. In fact, an overwhelming majority of employers report that providing family leave has a neutral or even positive impact on productivity and their bottom line."

Nothing in Bobby Shriver's biography comes close to Kuehl's accomplishments. Shriver is better known for his close ties to big business and big developers. Why else would mega-mansion developer Nile Niami donate $50,000 to Shriver's campaign? Does he think that the Santa Monica mountains and LA's neighborhoods are for sale to the highest bidder?

Sheila Kuehl can't be bought, sold, or rented. That's why so many people and organizations, from a wide range of views, have endorsed her.


Peter Dreier is professor of Politics and chair of the Urban & Environmental Policy Department at Occidental College. His latest book is The 100 Greatest Americans of the 20th Century: A Social Justice Hall of Fame (Nation Books, 2012).