Scientists have long known that common emotions can trigger sensations in our bodies -- whether it's butterflies in the stomach (anxiety) or hot cheeks (shame). And now a new study suggests that we all have the same bodily sensations associated with our feelings regardless of culture or language -- because the mind-body connection is biological, and is linked to our very drive for survival. 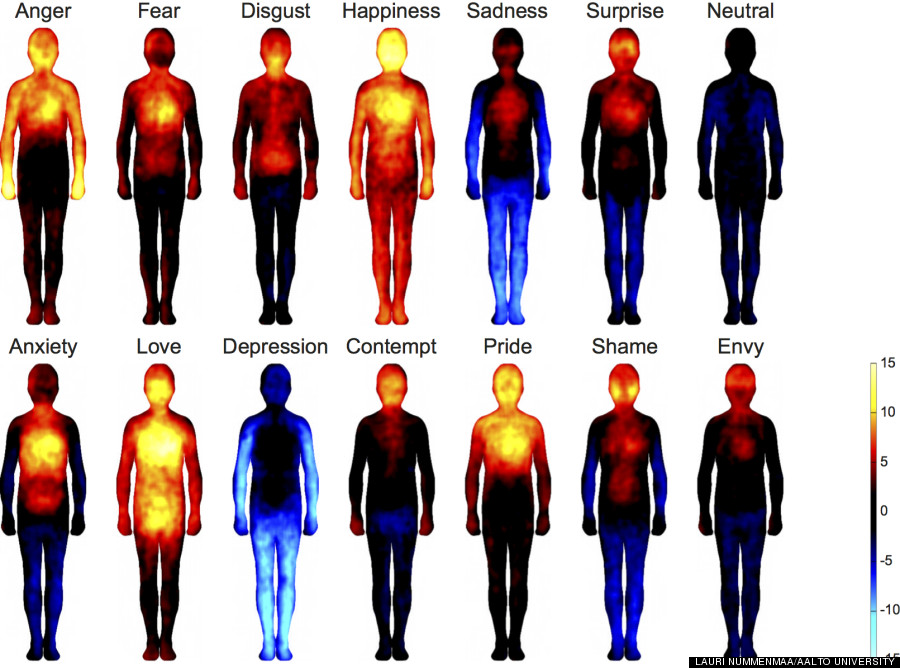 Self-reported body maps reveal areas in the body where certain sensations may increase (warm colors) or decrease (cool colors) for a given emotion.

"Our emotional system in the brain sends signals to the body so we can deal with our situation," study leader Dr. Lauri Nummenmaa, assistant professor at Aalto University's School of Science in Finland, told NPR. "Say you see a snake and you feel fear... Your nervous system increases oxygen to your muscles and raises your heart rate so you can deal with the threat. It's an automated system. We don't have to think about it."

For the study, more than 700 men and women from Finland and Taiwan were shown two silhouettes of bodies alongside emotionally charged words, stories, movies, or facial expressions. They were asked to mark in the bodily regions on the silhouettes where they felt a physical sensation response to each emotional image.

What did the researchers find? The resulting body maps revealed that most people had similar physical sensations in response to each emotional state.

As fascinating as the maps are, some critics warn that using these subjective self reports may be misleading. Dr. Paul Zak, chairman of the Center for Neuroeconomics Studies at Claremont Graduate University in California, told HealthDay that "areas in the brain that process emotions tend to be largely outside of our conscious awareness," and some people often feel more than one emotion at a time.

Still, the new research may shed light on the functions of emotions and their biological basis, as well as different emotional disorders, Nummenmaa said.

"Many mental disorders are associated with altered functioning of the emotional system, so unraveling how emotions coordinate with the minds and bodies of healthy individuals is important for developing treatments for such disorders," Nummenmaa told HealthDay.

The study published online Dec. 30. 2013 in the journal Proceedings of The National Academy of Sciences.