Earlier this week, The New York Times ran a profile on Kathryn Morgan, a former New York City Ballet soloist who, after suffering through a string of illnesses related to her under-functioning thyroid, has become somewhat of a beacon of body image awareness in dance. Following her battle with unexpected weight gain and a decision to leave the NYCB to focus on her health, she's back with an uplifting YouTube channel geared towards empowering young female dancers.

Morgan's comeback story -- which involved, as the NYT pointed out, a 25-pound weight loss -- is recounted in a manner similar to that of an injured athlete making her way back from the DL. Now that she's undergone a new fitness regime, she has her sights set on finding a new spot in a company in Europe. It's certainly an inspiring story of perseverance, but it narrowly skirts an idea discussed often in ballet circles: that body diversity should not be an obstacle, it should be a celebrated aspect of dance.

It is certainly a contested issue. "Dancers’ bodies need to look a certain way to make the kind of pictures we want for classical ballet," Dorothy Gunther Pugh, Artistic Director of the Ballet Memphis, explained to Pointe Magazine. (To be fair, she also said, "I don’t want a company where everyone is the same height or has the same instep.")

The "classical" ballet image seems to be that of a thin and tall figure, which more than few professionals have argued is simply a physical prerequisite to a strenuous industry. And then there are the dissenters. "Big can often be better," Judith Mackrell wrote in The Guardian. "Even if the technical demands of classical dance make it impossible for larger dancers to aspire to a mainstream professional company, dance is, of course, much larger than ballet... By far the best argument against the fetishisation of thin, is to see and enjoy everything that lies beyond it."

Some of our readers agree.

"We're clearly missing body-type diversity," Jessica Waggoner wrote in the comments section of our previous post on ballet icons changing the face of dance. "What about dancers that don't exactly fit the mold of long, lean, lithe? Beauty and self-expression exists with many shapes!"

In this spirit, we've put together a list of 9 other women who are working to change the way we view body image in dance:

You might recognize Ebony Williams from Beyonce's "Single Ladies" video. Or from the June/July 2014 cover of Pointe Magazine. Or perhaps you saw her on the @browngirlsdoballet Instagram account that brings awareness to diversity in dance. The Cedar Lake Contemporary Ballet company member is both a classical and commercial dancer who's spoken about the importance of body image, particularly for women of color.

"We are looking at ourselves every day in the mirror, and it can be draining and overwhelming... It’s hard, especially being a female. We’re very critical of ourselves.," she explained in an interview with Black Enterprise. "I think it’s important to know that you can have your best body... You don’t have to look like everyone else. You are an individual and it’s okay to be an individual."

"It’s O.K. to have a shape," she added. "You just have to look great -- your great. Feel comfortable in your own skin and own it."

During National Eating Disorder Awareness Week earlier this year, St. Paul Ballet dancer Brittany Adams took part in "Take Back the Tutu," a social media campaign that featured testimonies and images devoted to body confidence. "I see myself as curvy," Adams proclaimed to Minnesota Public Radio. "When I walk into a studio, I notice that my chest is three times as big as other people's, and I have a larger butt."

The campaign was organized in part by the Emily Program, a program that regularly treats dancers and athletes struggling with body image issues.

Ashley Roland, a former track and diving athlete, began her career at the Alvin Ailey studio, MOMIX Dance Theater and ISO Dance. She is currently the artistic director of BodyVox, where she takes control of her own choreography and costuming.

"I was always really thankful for the athlete’s body I was given," Roland explained to Dance Magazine. "I’m very comfortable with my body now. I love my curves. I don’t regret having them; I just choose to do other stuff with my choreography and my costuming."

Ballet fans might remember the over the top offensive review Alastair Macaulay wrote for The New York Times in 2010, in which he accused Jenifer Ringer of eating "one sugar plum too many." Since then, the NYCB veteran has opened up about dealing with eating disorders and the pressures associated with elite ballet.

In interviews conducted shortly after she published her memoir, Dancing Through It, Ringer spoke specifically about the beauty anxieties tangled up in professional dance. "My identity and my self-worth were so wrapped up in my ballet achievements. All I was was a dancer; as a failed dancer, I was nothing," Ringer admitted to Elle. "I also think that, in the ballet world, people have to start appreciating a different aesthetic. That's true for the fashion world, too, and the world in general." 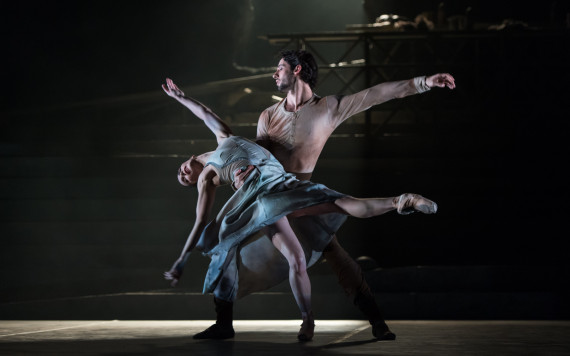 “Audiences want to see beautiful and healthy-looking dancers yet there is still that pressure to be thin," English National Ballet Artistic Director Tamara Rojo proclaimed to The Sunday Times back in 2012. Rojo has made it known that she's not interested in employing underweight ballerinas, hiring a sports scientist to guide her dancers’ training, as well as a psychologist to help the dancers with ensuing anxieties.

"I just hate the infantilisation of women. In everything. In fashion, in ballet, in politics. Ballet can be many things and I don’t think we have yet managed to spread that information. The audience who go to the Tate Modern should be coming to see ballet, but they don’t necessarily."

Loughman is one of two choreographers featured on Ovation's "Big Ballet" series. The show has received mixed reviews, to say the least, but putting aside the show's potentially misguided intentions, it has done something few other ballet companies or dance-inspired television programs have -- it's put ballet body diversity in public consciousness. Loughman may be a rather thin, elongated individual herself, but her sometimes abrasive attitude on the show has been markedly body positive.

"You can be big and still be elegant," Loughman explained to The Guardian. "Back in the day, Marilyn Monroe was a size 14. Some of these women have amazing figures. One has the longest arms I've ever seen. She's just got boobs and a bum, too."

Sure, Loughman -- like the much of the established ballet world -- has a ways to go, but it'd be interesting to see where "Big Dance" takes the conversation in the future.

Melissa Anduiza, of the North Carolina Dance Theatre, has detailed her experiences with weight gain and dieting in Dance Magazine: “I’m a big woman, just genetically. I’m 5'7". My dad is Cuban and 6'5"; my mom is Filipino and 5'. I got Dad’s genes," she explained. "I had insecurity about not looking like the smaller girls I danced with."

She recently took part in a project titled "Strength and Beauty," a documentary about ballerina's personal accounts of dealing with issues like weight, motherhood and personal relationships. "Ballerinas do have a stereotype," Anduiza confesses in the trailer for the film. "They're really skinny, they don't eat... they're very prissy, they like pink."

"Strength and Beauty" seeks to point out that ballerinas are also "women, artists and people."

Georgia-born dancer Rachel Sherak started training at the age of 10, shortly after which she was diagnosed with scoliosis. Throughout high school, she only took her back brace off to dance.

"I overcame a crazy obstacle. It took me a while to embrace the fact that my differences are what make me unique. They shape the way I express myself. That’s where the beauty lies. I wasn’t flexible, but I was powerful. It doesn’t make me the best White Swan, but it helped me transition to contemporary ballet. I can jump high. I can stay strong throughout a really long ballet.”

"I'm a body love advocate," dancer and blogger Amanda Trusty recently wrote in an essay for The Huffington Post. "How can I tell my ballerinas to suck it in and tuck it under, knowing how much that shaped my childhood? There's got to be a better way."

And there is, according to Trusty. After an eight-week period of brainstorming, she produced a guideline to training young women to be not only good dancers, but body positive athletes. She hopes the outline to teaching will inspire a new generation of instructors who want to bring body love into the classroom.

(Also, check out Trusty's video above, in which she strips, burlesque-style, to Katy Perry's "Roar", peeling the words "cellulite" and "fat" off her body.)

For more on representation in the dance world, check out our roundup of dancers changing the landscape of ballet.