It ain't necessarily so what so many dieters say -- that when they lose weight, they'll gain body confidence. So concludes a new study about the lingering stigma of obesity in the Journal of Health and Social Behavior. While overweight black girls did feel better about themselves when they lost weight over the course of the study, overweight white girls did not.

After analyzing 10 years of data on more than 2,000 black and white girls from the National Growth and Health Study, Purdue sociology researcher Sarah Mustillo can't say exactly why the effects of obesity-related stigma lingered for the white girls, but not the black. That's a subject for future study.

What the good sociologist can say: The black girls' self-esteem bounced back when they lost weight in early adolescence. However, when the white adolescent girls lost weight, their self-esteem remained flat. What's more, despite their lower body mass index, both groups continued to have negative body perceptions. In other words, the body image of both the black and white study subjects got stuck in time

"Despite changes in their relative body mass," Mustillo said, "we found that obese black and white teen girls who transitioned out of obesity continued to see themselves as fat." 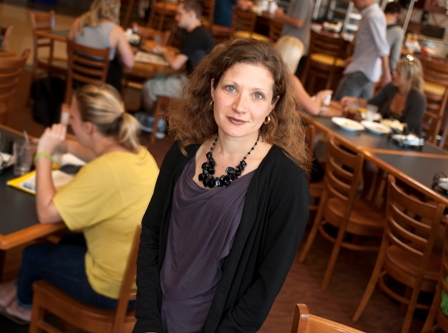 I filed these intriguing findings for future reference, but I couldn't stop wondering: What is it about our culture that makes it so darned hard for girls to have good body image? Why, in fact, does bad body image plague America's great, multi-generational sorority?

To answer these and other questions, I decided to do what I usually do -- pick the brain of this compassionate mind for illuminating insights. I am also going to make my phone interview with this body image researcher the first in a new blog series on changing bad body image for good. What follows are questions and answers from my recent long-distance chat with Mustillo.

Q. Everyone talks about body image, but what is it exactly? What's your best working definition?

A. There are a lot of different definitions of body image. The working definition I use is an individual's perceptions, thoughts and feelings about her body, and how they're shaped through interactions with others and within a larger societal context.

Q. What moved you to explore body image in teen girls?

A. If the current national movement to end childhood obesity is successful, we can anticipate many young people moving from obese into the normal weight range, which will result in better physical health. I wanted to know if the same thing would happen for psychological health.

Q. What's the story behind the study? Did you struggle with bad body image as a kid?

A. The truth is I was a skinny girl. I didn't struggle with weight, nor did I really realize that some people wanted what I had. At the time, being thin and curvy was the ideal. I was too busy focusing on the fact that I wasn't curvy to be happy about being thin.

Q. Your conclusion is surprising, especially for dieters who believe that if they could just lose weight, they'd gain body confidence. What surprised you most about your findings?

A. People who lose weight may gain body confidence, it just may take longer than what one might think. We only followed these girls for a short period of time. Maybe if we would have followed them for another year or two or three, we might have seen an increase. My fear is if it [gaining body confidence] doesn't happen soon enough, people might lose the motivation to stick with it [losing weight]. What surprised me most was definitely the body-image finding -- that these girls continued to see themselves as heavy. Even as their bodies were changing, their perceptions of their bodies were not changing. To me, it speaks to the fact that the ideal is truly unobtainable. Even if they were getting closer, they still saw it as out of reach.

Q. How do you understand why black girls felt better about themselves after losing weight, but not white girls? What's the cultural difference?

A. There is evidence that black girls may be more accepting of different body sizes than white girls. At the same time, self-esteem still appeared to be tied to weight for the black girls. Because when they transitioned out of the obese range, their self-esteem improved, but their body image didn't change very much. To me, that says there's less of a link between body image and self-esteem among black girls than white girls. But that's something that requires a whole lot more research to understand.

Q. You're a sociologist. What is it about our culture that makes it so hard for women of all ages to have good body image?

A. Body image is so tied up with our overall sense of self. So when we look in the mirror and feel deficient, or look at another woman and feel "less than," it isn't just about body. It's about a deeper sense of unworthiness, and that just gets expressed in the body. You know, if I look at another woman and think her hair is so much nicer than mine or whatever, pick a body part, it's likely that she's got nicer hair. But it's also likely that I think that woman is better than me in other ways -- nicer than me, smarter than me, a better mother than me. It's not really about the body. It's about a deeper sense of feeling less than, or in competition with, other people. That goes hand-in-hand with our culture emphasizing individuality, independence, and that life is a popularity contest. We're in constant competition with each other, which encourages us to be critical of others and to be critical of ourselves.

Q. If weight loss doesn't improve body image, what does?

A. On a fundamental level, compassion for ourselves and others, and connectedness with others, might improve body image. I try to see myself the way I see my children -- beautiful, precious, incredible beings. To me, that's self-compassion. In terms of connectedness with others, it's helpful to remember that underneath all our physical differences, we're all emotional beings with needs and insecurities. If we can see other people with that same sense of compassion, then that could reduce the [sense that] life is a popularity contest. But that's hard enough for grown women to achieve, much less for teenage girls. On a more practical level for teenage girls, deemphasizing physical appearance and emphasizing other aspects of who they are helps. For example, there are studies that show girls who have a strong sense of identity in a role, like musician or athlete, have better body image because they locate more of their sense of self in that role than in what they look like.

Q. Do you think it's really possible to significantly alter body image?

A. I do. I just don't think it's as simple as doing some self-help exercises and being done with it. It's such a bigger societal issue. It needs to be addressed on several levels.

Q. What else needs to be done?

A. In a nutshell, I would like to see more work on racial differences and the cultural context of what defines ideals, how those ideals get transmitted to girls, and how that affects self-esteem. People always point to the media [as the source of white girls' body ideals], but what about black girls? Are they getting it from the media as well, or are there other sources? Also, I'd love to see more research done on ways to combat stigma in this area -- obesity -- and others.

Q. What's next for you and your research team? Are you already hard at work on a new study?

A. Of course! We are finishing a follow-up study on the same group of girls that examines parents' and friends' fat-labeling on mental health. In other words, the long-term effects of being told "You're fat!" by your parents or your friends, and how that affects mental health.

Jean Fain is a Harvard Medical School-affiliated psychotherapist specializing in eating issues, and the author of "The Self-Compassion Diet." For more information, see www.jeanfain.com. If you know anyone who has changed bad body image for good, tell me about them in the Comments section. This blogger is in search of future profile subjects as well as effective body-image programs.