"How do you feel about your body?" That is the question research psychologist Tiffany Stewart asked women and girls in launching a new website designed to prevent eating disorders and other health problems. To give voice to all those who suffer silently with bad body image, Stewart, the director of Louisana State University's Behavior Technology Laboratory, posted the most poignant answers on Emerge. That's the name of her burgeoning website. At the same time, this Baton Rouge researcher started developing an array of high-tech tools informed by this and other cutting-edge research on body dissatisfaction to help end the silent epidemic.

For a low-tech gal like me who has yet to trade in her calendar for a smartphone, Stewart's high-tech tools for bolstering body image are challenging to comprehend. But you don't need to be computer savvy to appreciate Stewart's innovations. She's using smartphone apps and other popular technology to do what she did as a director of an eating disorder inpatient unit -- empower young people to shift their focus from unrealistic appearance ideals toward health and well-being. 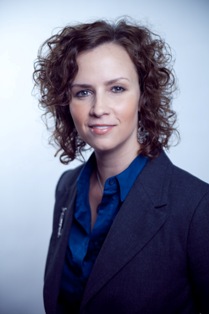 To that end, this resourceful researcher has stepped away from the academic track to co-found Body Evolution Technologies, a digital media company dedicated to furthering research and commercial efforts in body image, eating disorder and weight-management technology. Given the success Stewart has had deploying such tools to American soldiers far and wide to prevent obesity and stem other bad habits, her new venture holds promise.

If you watch Stewart's inspirational Body Image Project video, you'll see why I felt compelled to track down and chat up this scientist turned entrepreneur. What follows are questions and answers from our recent phone interview.

Q. You're a gal who wears a lot of hats: clinical psychologist, researcher, cofounder of a high-tech company, yoga instructor. Set me straight: Which hats are you currently wearing?

A. I'm a scientist first and foremost, as well as a clinical psychologist. Now I find myself an entrepreneur. My mission is to bring scientific tools to the people who need them most. So many things are developed in science that get great results but stay in the academic realm, like programs for the prevention of eating disorders. The work I do is dedicated to translating scientific tools into popular formats that can engage young people to change their health behaviors -- their eating, exercise, body image and self-worth.

Q. You've been working on body image and eating issues for the last decade. What got you interested in this field?

A. When I was treating severe patients with chronic eating disorders, I realized that, when people recover, they still struggle quite a bit. A driving force is the difference between "surviving" and "thriving." The definition of surviving is living another day. Thriving means growing, evolving. There's way more out there than obsessing about how we look and being extreme about health behaviors, either by doing too much or not doing enough. There's balance to be acquired. In that balance, we thrive. We called our website Emerge to get at the thriving idea.

A. I was a competitive gymnast for 10-12 years. Later on, struggling with severe injuries [that forced me to retire], I developed a much deeper relationship with my body than just evaluating it for appearance. The assumption that thin is healthier is completely wrong. Between my own experience as a gymnast, being injured, valuing function and [freedom from] pain, plus working with severe patients -- all these things combined drive me.

Q. Why did you choose high-tech over academia?

A. A very high percentage of college students engage in some sort of eating-disorder behavior. You find a lot of dieting and people trying things like vomiting, over-exercise, diet pills ... While none of those [behaviors] are a full-blown eating disorder, they're certainly prepping people to have one. Those are the young people we're trying to affect.

As a [former yoga instructor], I try to keep technology at a certain place. I'm not addicted to my phone, and I don't stare at my iPod all the time. At the same time, this is what young people are doing. I'm not suggesting that technology will solve all our problems, but I am suggesting that getting prevention tools into the hands of people who need them before a problem develops might stop it from fully developing.

Q. I first heard about you through The Body Image Project. Can you explain that project and how it relates to your current work?

A. In a nutshell, The Body Image Project was a way to start a meaningful conversation about body image. Basically, I went out and interviewed all sorts of people about body image -- not just about body size, but hair, face, skin, functional limitations, all these things. I wanted to show all different angles on body image by first, producing stories, then getting people to respond [post their own stories on the website].

Q. In addition to The Body Image Project, you've also got apps [applications or downloadable programs for mobile devices], and the first one is Body Image Voice. Can you explain how this app works in plain English?

A. Given the relevance of body image as a health factor, and the fact that the majority of the general population struggles with body image in some way, we see an incredible opportunity for mobile programs that can measurably improve health behaviors. We called it [this first app] the Voice because we want people to use their voice. The media throws unrealistic ideals at us and we have no voice against it. The sad fact is the majority of people buy into these ideals. We strive to be like supermodels even though we've become more aware of Photoshopping and what not. With the Voice, we want people to do two things: use their voice to point out where the media really gets it wrong. More importantly, we want people to point out where the media gets it right. We want to fuel advertisers who are doing a really good job and help others who might not be doing such a good job to change their ways.

Q. You've got apps for body-image assessment, awareness and improvement in the pipeline. What's the ultimate aim with all these high-tech tools ?

A. The ultimate aim is institutional and individual use. [Institutionally], if a university decides they want to deploy eating-disorder prevention to their freshman, they could take our tools and do that easily. The [college] counseling center could also use our assessment measure to determine who might have deeper problems. [Individually], all these tools will be available to anyone. The beauty is they're all clinically derived, meaning that I, as a professional, developed them, but you don't have to be a professional to use them. So all of it can serve as self-help as well as institutionally-derived help.

Q. Anything else you want to tell me that I didn't ask?

A. Even in the scientific literature, body image is thought about as an appearance-based thing. No one has ever talked about body image in the context of health. But it certainly affects our health, influencing our eating, our fitness and social habits. With everything we're doing, we're looking for a place where appearance and health can meet and basically be happy together.

Jean Fain is a Harvard Medical School-affiliated psychotherapist specializing in eating issues, and the author of "The Self-Compassion Diet." For more information, see www.jeanfain.com. Know of an innovative program for boosting body image? Do tell in the Comments section.