She was young and wild, a bit of a rebel. The 22-year-old woman's body art announced that message as subtly as a billboard on a highway. No stranger to illegal drugs, she had inhaled or injected the worst of them, including cocaine and heroin. But recently she had turned a corner. Last month she removed her new tongue piercing only two days after getting it, and she hadn't injected any drugs for the last five months. Ironic that after cleaning up her act she should now find herself stricken with a throbbing headache that was unfazed by aspirin. Severe nausea, vomiting and vertigo drove her to the hospital.

The results of an HIV test were negative. A neurological exam found mild ataxia (un-coordination) in her left leg, which she had already noticed. This alerted her doctors to a potential problem in the right side of her brain in the region of motor co-ordination, called the cerebellum. A CT scan and an MRI delivered the diagnoses with alarming clarity. The woman was suffering from a festering brain abscess in her cerebellum. Emergency brain surgery was scheduled to remove the diseased brain tissue and drain the infection. Treatment with strong antibiotics was begun immediately. Laboratory analysis revealed that the infected brain tissue was a harrowing cesspool of infectious bacteria that included Streptococcus, Peptostreptococcus, Actinomyces and Eikenella. If she hadn't injected any drugs in five months, how did these flesh-eating bugs get into her brain?

On the other side of the world from the New Haven, Connecticut hospital where the woman was treated, a 22-year-old Israeli man, who in outward appearance might have made a compatible match to the rebellious young woman, was suddenly stricken with a high fever and profound fatigue. The young man had always been blessed with youthful vigor and unlike the woman, he never abused illegal drugs. Without warning the man rapidly developed global aphasia; that is, the inability to speak or write or understand written or spoken language. His neurologists knew with certainty that his left cerebral cortex was impaired. This part of the brain is where Broca's and Wernicke's areas are located, which control speech and language comprehension. Soon the right side of his body became paralyzed.

A CT and MRI scan revealed 13 horrifying ring-shaped bleeding abscesses the size of ping-pong balls in the man's brain. Lab tests showed that he was negative for HIV and cystic fibrosis, but his blood count confirmed that his body was fighting a life-threatening infection. There were too many abscesses to remove surgically. A brain biopsy revealed the pus-filled brain tissue was swarming with the nasty bacteria Streptococcus intermedius. 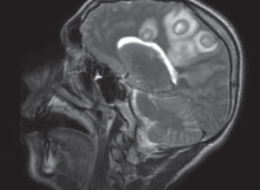 This bacterium is part of the normal flora of the mouth and upper respiratory tract, but when the germ gets inside the body it forms life-threatening abscesses in the liver, brain or inner lining of the heart. Streptococcus intermedius infections of the brain are usually the result of head trauma or complications after brain surgery, but this man had been perfectly healthy until 22 days ago. What had happened to this man two weeks earlier?

A medical history revealed that nothing remarkable had occurred to the man recently, except that he had received a tongue piercing two weeks before. A common thread tied the young man and woman's fate together in the medical literature--a link through lingual baubles to brain infection.

The woman would survive, but after suffering three more weeks in the hospital, the young man would lose his life to the germs that entered through the piercing in his tongue. They invaded without causing any local infection of the tongue or producing a fever, and they silently worked their way into his brain where they turned it to pus.

When you think about it, this really should come as no surprise. The mouth and nasal passages are a veritable incubator of nasty disease-causing bacteria. We all suffer sore throats, respiratory and nasal infections as a result, some of them quite serious. The surprising thing is how resistant our vulnerable tongue is to infection--unless you poke a hole through it. The tongue is shielded with a thick, tough outer layer of skin and it is bathed continually with saliva containing antimicrobial proteins. In contrast to earlobes, the tongue is richly supplied with blood, which provides an invading germ ready access to the blood stream, to spread infection throughout the body. The veins that drain the tongue connect directly to the internal jugular vein, which is a direct route into the brain. Earlobes are cleaned with surgical antiseptic before piercing them, but the tongue is not prepped before stabbing a hole through it. Mouthwash usually precedes the needle, but that is more for the benefit of the person doing the piercing.

Disease attacking the brain is perhaps the most dreaded of all disorders for most people. You can't avoid most of them, but some of them you can.

To learn more about brain infections and how the body fights them see the new book: The Other Brain, by R. Douglas Fields, published by Simon and Schuster, 2010. http://theotherbrainbook.com