Heather Wynn is on a mission to change the conversation about women and fitness. "You can't hate your body into true health," she says, in her new book about the subject, Enough Already! : Finding Happiness Now in a World that wants to Sell you Perfection Later. I interviewed Heather to learn more about her personal journey as a health and fitness coach who came to see that the industry was in fact trapping women in an unhealthy addiction.

Question 1: Heather you come out strong condemning the health and fitness industry for hooking women on a damaging yet addicting ideal. How would you describe what you discovered?

Answer: I've worked in the health and fitness industry for over 17 years and during those years I have witnessed the industry explode. It is now a whopping 59.7 billion dollar industry, with many expecting this to rise to 100 billion by 2017. However, alongside this I have also witnessed health rates decline and obesity rates soar - if you take obesity and factor in the co-morbidities it costs the NHS approximately £3.5 billion pounds a year. We also have more gyms, qualified personal trainers and nutritionists, as well as deeper access to up to date research, than ever before. What the health and fitness industry is doing isn't working. In my opinion what the industry is doing is increasing the divide; by encouraging fit people to become fitter, whilst at the same time shaming those who aren't matching up to the media's portrayal of what is physically acceptable.

The industry has become less and less about health and more and more about looking good, resulting in women being sucked into the belief that if they could just find a 'magic pill' the will give them even just a small chance of looking like the models on Instagram, then they will achieve the same smiley, happy life as a result. No wonder the industry is growing at such an alarming rate; it is selling not only the dream of physical perfection but also life utopia as a side-effect. Only neither of those things appear, there is no pot of gold at the end of the 'new diet' rainbow, breeding the next cycle of failure-shame, thus leading that hunt for perfection to continue full cycle.

Question 2: What makes women in our culture particularly vulnerable to this kind of addiction?

Answer: I feel that the rise of social media has had a lot to do with the increased pressure we feel to live up to specific physical standards. We have always had fashion magazines, advertisements etc. but we knew the deal with them. As a child I knew that the images I saw on the cover of Vogue for example were more art than real-life. These days, however, it's becoming increasingly difficult to know which of the thousands of images we see on a daily basis are real, and which are edited or even completely computer generated.

Previously we knew to expect the girl on the cover of the posh magazine had been edited to look slimmer or 'prettier' to make the magazine appear extravagant and luxurious, whereas now it's quite possible you are - without knowing it - witnessing similar effects when scrolling through your next door neighbour's recent holiday snaps.

How can we, or the next generation of women, be expected to grow up into confident, self-assured adults if the pictures we are constantly encouraged to compare ourselves to often aren't even real?

Question 3: What does you book have to say to women caught up in this trap that can lead them towards genuine happiness?

Answer: My book is all about finding peace with who you are, now, not only when you have reached some physical ideal. Trends change and there will always be some part of our physical body that we feel needs to be 'improved' upon to fit what we deem to be acceptable at the time.

If women work on the basis that their happiness can only exist if they match up to these physical expectations, then they are signing themselves up to a lifetime of chasing the impossible. I spent years in this mindset, I deem myself lucky that it was only a few years, because I see women who are still chasing that dream 40-odd years down the line.

I am a health coach, so I will always advocate health, I would never encourage women to turn their back on their health. But what I feel the industry has done is confuse the public as to what health actually is; it's not six pack abs or thigh gaps, in a physical sense health is being free from illness or injury, and a huge aspect of health is also being in a state of complete mental and emotional wellbeing. Therefore, we cannot expect negative self-image, punishment in the form of food restriction, over exercising or self-denigration to lead to improved overall health. Health starts in the mind, and so does self-confidence.

Question 4: Hillary Clinton's campaign for president is putting a spotlight on the deep misogyny in American culture. Her rival Donald Trump has even said "she doesn't look presidential. " Trump's other body-shaming remarks about women ("fat slobs") are bringing into focus the very issues you raise in your book. What do you think about this?

Answer: More and more stories like this are hitting the headlines, but they are often accompanied by huge backlashes and uproar which shows that we as a society are slowly becoming more intolerant to fat / body shaming. However, the worrying aspect of this particular case is that someone with such influence deems it acceptable to take to such school-yard bully tactics. What makes a woman's weight so much more relevant than a man's weight? If the situation had been turned around and a female candidate had branded men with labels such as 'fat slobs' or suggested her male opposition didn't 'look' attractive enough, it's highly likely hilarity and ridicule on her part would have ensued.

There is still a very obvious inequality here and conversations like this, at such an influential level, do nothing to help us move past this.

Question 5: You are still a personal coach. How does what you do today differ from how you used to work with your clients?

Answer: Previously I'd work with most of my clients with a goal of changing how they look. These days I spend more time helping women to change the way they feel about the way they look.

In the past I'd jump on board with a client's physical goal without questioning their reasons for it, I'd scrutinize and advise with the sole aim of helping them achieve that physical image they had in their head. Now a huge percentage of my time with a client is dedicated to working on their mindset, their body image and their confidence levels, so much so that often the original physical goal they have in their mind at the start becomes altogether redundant. 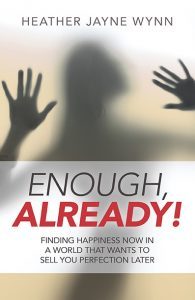 Heather Jayne Wynn is an experienced coach with over seventeen years' experience within the field of women's health and fitness. She is an educator, speaker and mentor within the health-and-fitness community worldwide. She currently resides in Cheshire, UK.

Amazon US: Enough, Already! Finding Happiness Now in a World that wants to Sell You Perfection Later.