My high school is the only high school in the world where it is cooler to be in the spring musical than to be a cheerleader. But I wanted to do it anyways.

At the end of my freshman year of high school, I decided I was going to join the "Spirit Squad." Up to that point I had been competitively figure skating for ten years, and I wanted to have a more "typical" high school experience. I felt isolated. I needed to be a part of something. 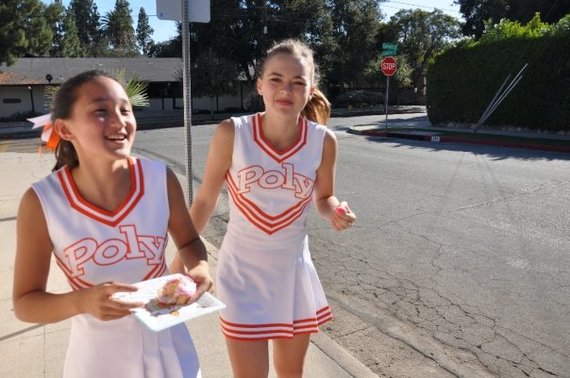 My sophomore year, I continued to skate before school, dance during school, and have cheer practice after school -- it was too much. But I was in the throes of an unacknowledged eating disorder, and I kept it up because I was celebrated. I was placed in the front row of dances, fellow team members asked me for diet and exercise tips, and hell, my self-deprecating humor was funny! Most importantly, I loved being on the team.

When junior year rolled around, I couldn't keep it up anymore. I lessened my extra-curricular load, and I upped the ante academically. College demanded these things, I was told. Nonetheless, I was the crowd leader that year, so I was still part of the team. I put on the polyester shells, I put my hair in a "half-up poof," and I yelled about football. But I started to feel excluded. In dance class, which I was still in, I was taken out of dances I had been in the year before. I thought to myself, "Is it because I gained some weight? I guess that could be part of it. I guess I'm not good anymore."

I was too anxious and depressed to do anything about it.

Senior year, I was going to do it all. Back on the cheer squad, I squeezed back into my shell for the third year in a row.

Fun fact about me -- I think I'm allergic to pom poms. 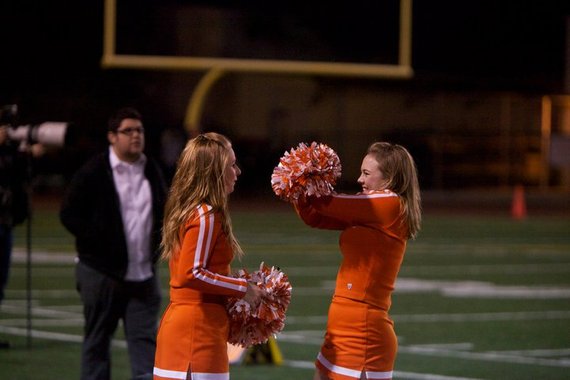 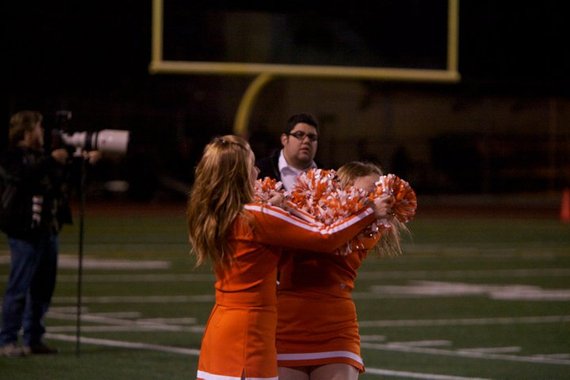 My friends knew that.

Aside from loving my team mates, I was miserable. I had just entered a long distance relationship, I was worried about getting into college, and I had gained even more weight. I felt it. I knew it. And it was a topic of discussion.

In high school, my humor was purely self-deprecating, as I mentioned before. I was riddled with body insecurities as I was attempting to keep up the illusion of perfection. Humor was my way of saying, "Hey. I'm okay guys!" when I actually was not. The thing about people with self-deprecating humor is that they are usually the most insecure; and it is only okay if they, themselves, make the scathing jokes.

In practice one day, I made a joke about one of my skirts not fitting: "If I bend over too far, my buttons are gonna blow!"

This joke was not out of the ordinary. Minutes after every football game would end, I would snap open my skirt and dramatically announce, "FINALLY." Everyone would laugh, and I would make a few more jokes about not being able to breathe. It was normal.

But the reality of it was mortifying for me. This was the skirt that was too big for me sophomore year, and now I could hardly breath. It used to hang from my hip bones, and now it clung to me like Saran wrap.

So when I made this joke, my dance teacher responded by saying, "Yeah, your butt does hang out of it during all the games!"

Her "playful" comment was affirming my deepest insecurity. Does everyone know? Everyone knew my clothes did not fit anymore. I held onto this. I obsessed about this. I cried about this. But I tried to move on. What was I supposed to do? I was being too sensitive, I thought. And she was right, I was stuffed into that A-line skirt.

Next, "Block Formations" were formally instituted. The formation made it so that the only person who was visible was the person in the front, leaving the two girls standing directly behind her completely blocked. Block formation would create "cleaner" lines, and be more "professional." I'm a team player, that's fine. But time after time, I found myself at the back of these formations. And hey, so was my friend who had gained weight over the span of our cheer careers. Oh, I could be seen, I was assured. Not from the front where the audience was sitting, but from specific angles on the sides. One time I was almost placed directly behind the only male member of our team who was 5'11. I was 5'4.

I was sick of it. I was a senior, master of the universe and high school. I had worked hard to be on this team, and why was I always in the back? I never was before. If I was that bad, please save me the embarrassment and kick me off of the team.

I was sad. My best friend and boyfriend (I know, awful. But it was true) was across the country. I was alone. I was applying to colleges and I was unsure of where I was going in life. And most importantly, I was fat. Block formations affirmed that I was too big for this team, I was too big for this uniform. I snapped.

"Why put me in this dance if we're going to be in this formation? I honestly would rather not be in it if I'm that bad."

Those twenty-six words were the only words of dissent that had ever spilled from my lips in my entire life up to that point.

Tears immediately gushed out of my head.

Promptly after, a meeting with the seniors was arranged. We were all given the opportunity to air our grievances: formations were unfair, no one was listening to the team captain, professionalism on the team was not up to snuff, etc.

I cried too much. I cried about missing my boyfriend, even though that was not the main issue, it was just the easiest way to wiggle my way out of confrontation.

Formations were here to stay. The deed was done. The meeting adjourned.

As we left the meeting, my dance teacher pulled me aside and divulged her deepest secrets to me. She expressed that she too had struggled with her weight, and she too felt like her body type wasn't accepted in dance. She could see right through me, she saw that I was suffering. She was my "friend."

But that's the worst part, even though she "understood," she was the one shaming me. She was the one punishing me for gaining weight. Years before she had celebrated my body -- my tiny, taut, starving body -- she had given me the opportunity to dance. But now she was simultaneously telling me she understood, while making comments about how my uniform did not fit.

She was pretending to be my best friend, but she was actually my worst enemy.

I don't have closure. I don't know if I will anytime soon, because this was not an isolated incident. There are plenty of more incidents that I am not ready to share. But I can tell you that I have never felt more violated and torn apart by an authority figure.

It was later confirmed that my dance teacher did suspect that I had an eating disorder. But she never once addressed me about it. That one day after the meeting, I assume she opened up to me about her own struggle hoping that I would open up to her. But the problem was that I didn't see it in myself. I didn't see the eating disorder, I saw imperfection. I saw fat.

It is somewhat comforting to know that she worried about me. But her worry does not excuse the fact that she was the one pelting body shame at me. Although she had once felt discriminated in the world of dance, as many people do, she was perpetuating that discrimination. She sincerely believed that the girls who had extra weight could not "execute the moves," nor could we "whip ourselves around" due to the excess weight. I can assure you that was not and is not the case.

I was used to my body being under scrutiny. Like I said, I was a figure skater for 13 years. But the devastating part about this experience is that this was supposed to be my escape. This was my attempt to be a high school kid. In the end, it perpetuated my eating disorder, while enforcing the unrealistic standards that were being placed on my body.

My temptation is to tell you numbers. I want to tell you what I weighed, I want to tell you what size I wore -- but that's not the point. That's perpetuating a standard. That is telling you that the size I was is fat in someone's eyes. I tell you this because I wish I had had the strength to realize that I was a beautiful dancer. I could not see that because I was in a toxic environment. I was in an environment that told me I could not be good at something because of my weight. I was in an environment where when one girl would lift up her shirt, it would cause all of the girls in the room to pull up their shirts to look at themselves in the mirror. I lived in a world of comparison. I was compared to the girls around me, and I was a compared to what I had been -- anorexic. And because of that culture of comparison, I was punished.

Words do not have meaning unless you give them meaning and life. My dance teacher's words may have taken years to scrape clean from my subconscious, but they are now powerless. Their corpses lay dead on the floor like a mangled mouse that the cat dragged in. I hope she learns that her words have power, as do all adults in a child's life, so that she does not leave someone damaged like she left me.

Dance is a complicated world. It's a world where your body is your canvas, and that canvas is supposed to look a certain way. And sadly, that standard doesn't just exist in dance, it's everywhere. But thankfully, the world is changing.

Which is why I leave you with this: When someone makes a comment about your body, tell them to shut up. They won't like it, but they'll never make a comment about your body to you again. Once I started doing that, I was finally allowed to learn to love my body. In the same vein, if someone makes a comment about their own body, tell them to shut up. It's getting old. No one wants to hear about how fat you think they are, nor do we want to indulge you and tell you how "pretty" you are- you should not need our validation or confirmation. If you are the one doing this, It's time to take a good, long look at yourself and say, "Why am I saying this? What is really going on here."

In the end, dance like no one is watching, and tell people to shut up when it is necessary. Even if it is your teacher. You'll probably get in trouble, but it will probably become a good story.