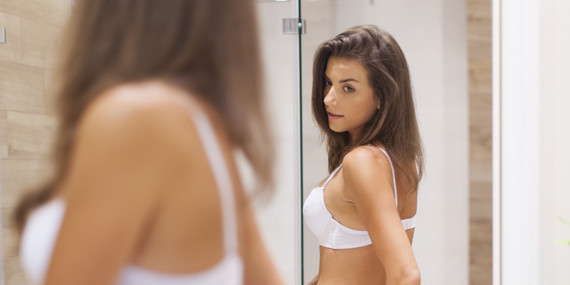 I have never been skinny. There is a common misconception that Latinas get a free pass to be curvy or larger, yet my experience as someone growing up in Puerto Rico has been far from that. I grew up being an awkward, chubby girl and was teased for being bigger than my female classmates. At the age of 11, I learned to loathe every aspect of my body. I hated my flabby arms, my fat rolls, my love handles and my round face.

I developed an eating disorder at that time, and everyone around me encouraged it. Teachers, family members and peers praised me for my weight loss. I had a teacher who even told me to continue to do whatever I was doing to be thin, as long as I didn't get too skinny -- meaning that losing weight this way was okay as long as I didn't end up in the hospital. I enjoyed the control I had over my body. I liked punishing it for bringing me so much emotional pain. I starved myself and exercised until I looked like someone who was deemed acceptable by society, yet still didn't feel confident enough.

I began to eat again and gain weight when I was 13. My mom complained about it and said that she didn't like that I was gaining weight. People stopped praising my body. I began to receive criticism of my body again, which lowered my self esteem. I desperately wanted to look just the way I did when I had an ED. I began trying to make myself puke whenever I felt too bad about my body. I started using laxatives. I felt like I would never be able to be happy unless I was skinny. Being skinny was not my ultimate goal in life, yet I felt like I should have made it a priority, so I would feel better about myself and be deemed attractive. Over the years, I had plenty of "friends" and family members point out my weight. I cannot express how many times I've been told, "You would be perfect if you lost 20 lbs!" or "You should diet."

It certainly didn't help that eating disorders became trendy in high school. Girls would congratulate one another for their weight loss, even if they knew that the weight loss was caused by unhealthy habits. The thinnest girls would be idolized and admired by the rest. A friend once told me that the preferred body type differs in the island according to socioeconomic class. This might be true, however, I've seen women of different economic and social backgrounds worry about their weight to the point where they've taken extreme measures to live up to society's standards. I've heard too many of my friends who are many sizes smaller than I am exclaim, "I'm so fat!" and bully themselves into going to the gym, even when they don't feel physically well, simply because they want to be thin.

Strangely enough, I experienced being in a body positive environment for the first time when I moved to the States for college. I was surrounded by people with different body types who were not shamed by their peers. Sure, many of my friends have insecurities but the pressure to be thin wasn't as bad as in Puerto Rico. It was refreshing to be in an environment in which I could feel more confident and wear whatever I wanted without fearing being criticized by someone. Unfortunately, while my college may have been a safe space for people of various body types, this is not typically the case.

The desire to be thin comes from the media's constant fat shaming and promotion of the idea that thinness equals success. It is so difficult to find someone who looks like me on television, film, and magazines. I vary from sizes 8-12, according to the brand and style of clothes. Even if I'm not considered plus-sized and can buy straight-sized clothes, I'm still considered to be bigger by society. Anyone who doesn't fit the mold of the ideal body image is shamed. I would love to be able to adore my body and feel confident. I would love to be able to proudly wear a bikini and not worry about something so trivial as having "flabby" arms or a tummy that isn't flat. All I hope for is that someday society will accept that we all have different body types and they're not meant to look the same. Health should be a priority, not thinness, and it's about time this changed.