Republicans grumbling about their Congressional leaders is on the rise again. Hillary Clinton enjoys a huge early lead in often fickle New Hampshire. And Millennials are less likely than their elders to believe everyone should vote. This is HuffPollster for Monday, November 24, 2014.

IS GOP HONEYMOON ALREADY OVER FOR BOEHNER & McCONNELL? - Kathy Frankovic: "Last week, the Economist/YouGov Poll showed a sizable post-election jump in satisfaction levels of Republicans with their party’s Congressional leaders, House Speaker John Boehner and Senator Mitch McConnell (who will become the Senate Majority Leader once the new Congress begins in January). But this week’s poll suggests their honeymoon with GOP voters may be ending, and at least for now, favorable ratings of the have slipped back from post-election euphoria. Republicans still feel better about their Congressional leaders than they did before the election, when just about as many were unfavorable as were favorable. But unfavorable ratings of the two have increased [among Republicans] from last week’s post-election low, up ten points for Boehner, and up 12 points for McConnell. And Republican favorable percentages for the two were down 12 and 14 points, respectively." [YouGov] 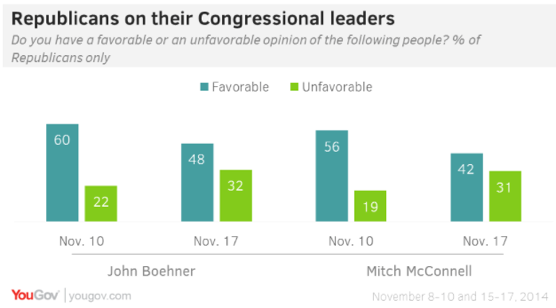 YES, 2014 WAS A WAVE ELECTION - Harry Enten and Dhrumil Mehta argue it's time for Democrats to stop blaming the map for their lost Senate majority: "Even if you control for the fact that a large number of races took place in red states, the Republican performance was the fourth-best by either party in the 17 Senate cycles since 1982. How did we come to this conclusion? We compared the margin of victory in almost every Senate race since 1982 with two factors: the presidential vote margin for the previous two elections3 in the states with Senate contests, and whether the incumbent was running...The average Republican candidate for Senate outperformed what we would have expected given the map by 8.5 percentage points. This graphic plots how well the average Senate candidate did versus what the model expected. It shows that the Republican performance in 2014 rivals other big waves of the past... Only in 1994, 2008 and 2010 did the average Senate candidate for one party outperform by more than he or she did in 2014....This year was different from other wave years because of the unusually strong influence of the presidential vote in individual states in the last two cycles. It explained over 75 percent of the variation in results across the races this year. That’s the highest ever." [538] 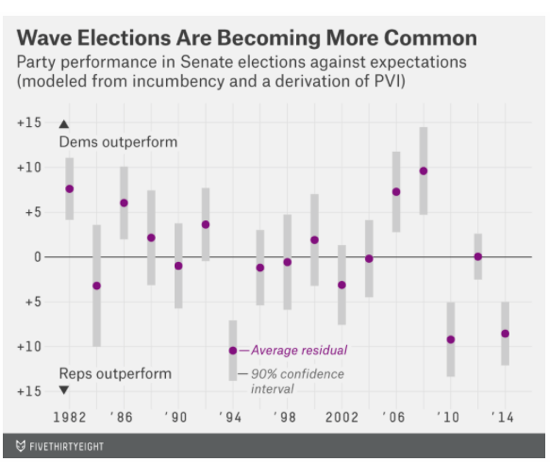 But candidates mattered - More from Enten and Mehta: "[I]t would be a mistake to say that individual candidates didn’t matter in 2014. Taking into account the fact that Republicans nationally outperformed as a group, a few candidates did considerably better than expected." They single out Alaska Sen. Mark Begich who "should have lost by closer to 10 percentage points than the actual 2," Senator-elect Cory Gardner who significantly outperformed the fundamentals and "ran arguably the best campaign in the country," and two contests in "blue tinted" states that "went in completely different directions," as both Republican Joni Ernst in Iowa and Democrat Gary Peters in Michigan did better than incumbency and past presidential voting would have predicted.

HILLARY CLINTON'S EARLY NH LEAD IS 'HISTORIC' - Lisa Lerer: "Hillary Clinton holds a historic lead in the New Hampshire Democratic primary, although a shift in opinion about the party's brand could be a drag on her candidacy in the general election. Sixty-two percent of likely Democratic voters in the early primary state said they support Clinton in a new Bloomberg Politics/Saint Anselm New Hampshire Poll of likely primary voters conducted by Purple Insights. It's an advantage that puts her in elite company: Only former Massachusetts Senator Ted Kennedy in 1980 and former Vice President Al Gore in 2000 have broken the 50 percent mark more than six months before the primary." [Bloomberg]

Poll used live callers - The poll of 989 New Hampshire voters sampled both landline and mobile phones and included oversamples sufficient to bring the total number of 2016 Democratic and Republican primary voters to just over 400 interviews each. Although previous Purple Insights polls used an automated (IVR) methodology, Managing Partner Doug Usher confirms to HuffPollster that live interviewers made all calls on the new survey. [Full results via Bloomberg]

But wait... - Stu Rothenberg, via Twitter: "Really, don't start following the 2016 presidential race now. Take a break. Nothing that is written about it now is important. Nothing." [@StuPolitics]

MILLENNIALS DON'T THINK EVERYONE SHOULD VOTE - HuffPollster: "Young Americans aren't just less likely to vote than their older compatriots. They're also less likely to believe that everyone should cast a ballot, according to a new HuffPost/YouGov poll. Most Americans age 45 and over say everyone should vote, according to the survey. But people under 30 are more than twice as likely to say that only the well-informed should cast a ballot as they are to say that all eligible citizens should do so….Younger Americans are the most likely to overestimate how many people voted in the most recent election….While 27 percent of all Americans said they'd think less highly of someone who didn't vote, just 18 percent of Americans under 30 agreed." [HuffPost] 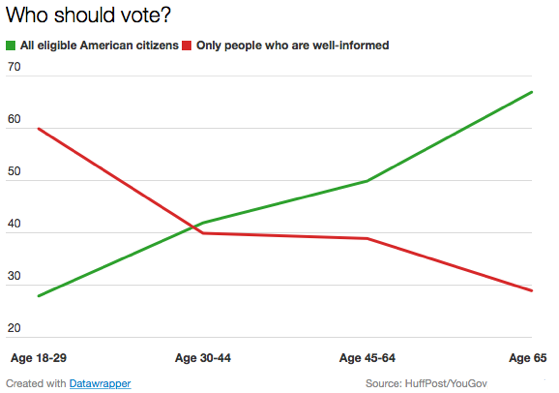 MONDAY’S 'OUTLIERS' - Links to the best of news at the intersection of polling, politics and political data:

-The Washington Statistical Society will hold s seminar on Dec 2 on "curb-stoning, a to neglected and very embarrassing survey problem." [WSS]

HUFFPOLLSTER: The GOP Honeymoon Is Short For Boehner And McConnell
John Boehner Cries

1 / 15
Twin Tears
Golf legend Jack Nicklaus, left, and Speaker of the House John Boehner (R-Ohio) wipe away tears after listening to the remarks of Nicklaus' son Jack Nicklaus II during the elder Nicklaus' Congressional Gold Medal ceremony in the U.S. Capitol Rotunda on March 24, 2015. Nicklaus was lauded by family, friends and politicians for his many sports achievements and his philanthropy.
Chip Somodevilla via Getty Images