Earlier this week, the legislature in Washington state agreed to give Boeing $8.7 billion in tax breaks through 2040 in an attempt to convince the company to locate production of a new jetliner fleet in the state. It's believed to be the largest state tax break for a company ever. But the huge concession still may not satisfy Boeing.

The company is now threatening to take production of the jetliner fleet elsewhere over a contract dispute with its machinist union. On Thursday, the union shot down a proposal from Boeing that would have replaced worker pensions with a contribution retirement savings plan and guaranteed raises of just 1 percent every other year, according to the Seattle Times. The New York Times reports that the proposed biannual 1 percent raise would have been in conjunction with some cost-of-living escalations.

“Without the terms of this contract extension, we’re left with no choice but to open the process competitively and pursue all options for the 777X,” Ray Conner, the chief executive of Boeing’s commercial aircraft division, said in a statement.

One of the nation's largest defense companies, Boeing already has a pretty sweet deal in Washington state, where the company says it does a majority of its business. The deal that Washington's governor signed into law Monday extends Boeing's breaks on the business and occupation tax -- the major business tax levied in Washington -- as well as some property and sales tax exemptions, from 2024 to 2040.

That comes after a decade in which the company was able to zero out its income tax liability to every state on $35 billion in U.S. profits, Citizens for Tax Justice, a left-leaning research group, notes in a new report. In addition to the state tax breaks, Boeing got $1.8 billion in federal income tax rebates over the last 10 years, CTJ found.

For their part, Boeing officials note that the company doesn't owe any corporate income tax in Washington, because the state doesn't levy one.

"We can’t pay a tax that doesn’t exist," Boeing spokesman Chaz Bickers wrote in an email to The Huffington Post. "In the last five to ten years Boeing has paid hundreds of millions in Business & Occupation tax in Washington State, which is based on receipts, not income."

Here's the breakdown of the company's state income tax history in all of the states where it does business, according to the CTJ. The chart only shows income taxes and doesn't include other taxes levied against businesses, like Washington's B&O tax. (Story continues after the chart.) 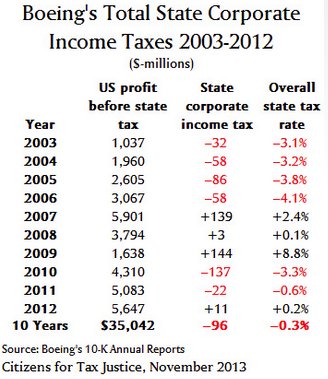 Matt Gardner, the executive director of the Institute on Taxation and Economic Policy, a think tank, said Washington's latest tax break for Boeing was particularly egregious, given the company's history of good tax deals in the state.

"It was especially interesting to us that Boeing has managed to extract such a monumental tax break out of Washington state, because more so than most companies they have a pretty amazing track record of paying next to nothing in state and federal income taxes, despite having huge profits," Gardner said.

Boeing's preferential treatment isn't rare. States, counties and cities give corporations about $80 billion each year in tax breaks, according to a 2012 investigation by The New York Times. Companies and advocates of the tax breaks argue that the money and the jobs that corporations bring in outweigh any subsidies they receive.

But in many cases the deals come after strapped government officials -- desperate to create jobs and concerned companies will move to other areas with more competitive offers -- sign on without the resources to effectively check whether the companies’ claims hold true, the Times found.

"You should ask really tough questions as a policymaker as to whether this constitutes a sensible strategy for economic development," Gardner said.

This post has been updated with additional information about the proposal rejected by the machinists union.

The Most Outrageous Corporate Tax Loopholes