Animals rights organization AnimaNaturalis is urging the government to comply with a plan to replace all of the 1,709 horse-drawn carriages that are a common sight on the streets by January 31, 2012, Elespectador.com reported.

Mike Ceaser of Mike's Bogota Blog writes that the drivers, or zorreros, often use their carts to scavenge and resell junk, and are being called by the government to trade in their horses for motorized tricycles. He writes that animal activists claim the horses are overworked and underfed, and city officials say the carts tangle up traffic.

On September 6, up to 80 activists formed a heart for 45 minutes at Plaza de Bolivar with signs promoting the dignity of animals and the dignity of humans by removing working animals from the streets, El Espacio reported.

According to UPI, more than 2,470 families rely on the horse-drawn carts and are being left in limbo as they wait for a decision about their livelihoods to be made by a government who places little importance on the issue. The author of Mike's Bogota Blog says the zorreros are "overwhelmingly poor and uneducated," and are unlikely to make an easy transition to motorized vehicles.

A carriage ride accident in New York City this summer sparked newfound anger over the city's treatment of the horses. New York State Senator Tony Avella and Assemblymember Linda B. Rosenthal introduced legislation in June to ban horse-drawn carriages in New York City. According to Gothamist, Avella said at the time, "We can no longer turn a blind eye to the mistreatment of these animals." Learn more about supporters of the NYC ban here.

Check out photos from the Bogota, Colombia protests below: 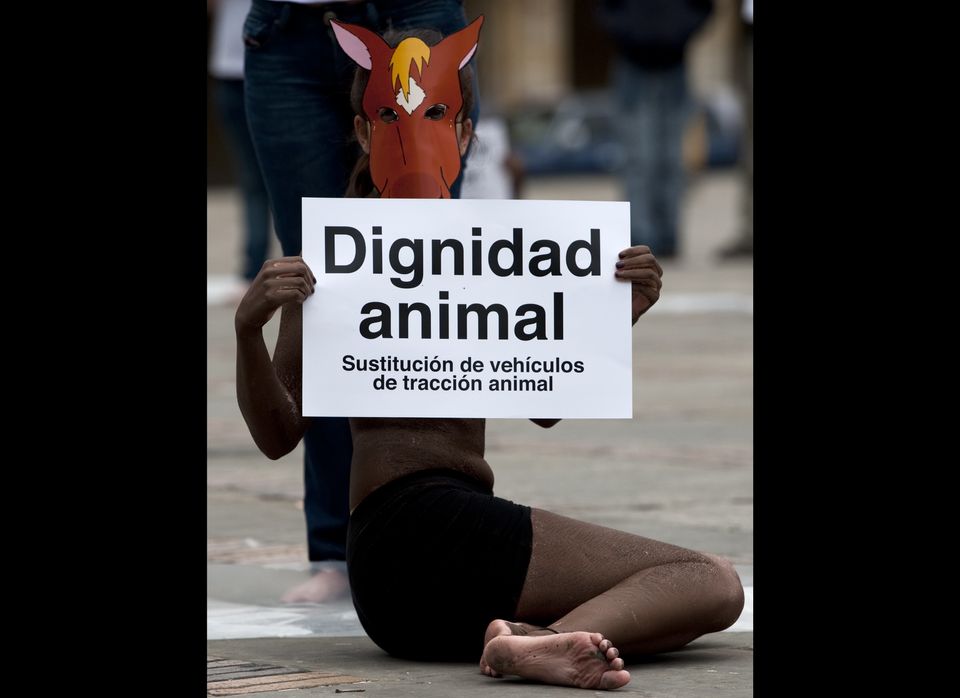 1 / 6
Activists of AnimaNaturalis Colombia take part in a demonstration against the use of animal traction vehicles at the Bolivar Square, in Bogota on September 6, 2011. (LUIS ACOSTA/AFP/Getty Images)
Getty