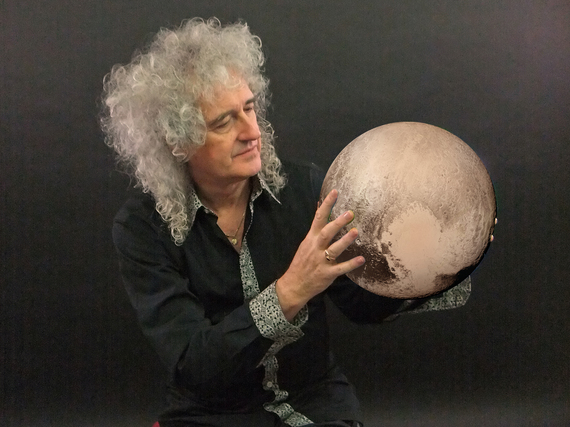 There are things known, and things unknown, and in between is Brian May.

First, what is known.

Brian May is revered around the world as the lead guitarist of Queen, one of the most iconic rock n' roll bands of all time. Queen's ascent was stratospheric, their reign imperial in its reach. Their music video for Bohemian Rhapsody is said to be, perhaps, the most influential music video of all time, and the first music video that got as much attention as the song itself. Some music critics have maintained that the video lead to the rise music video culture, and thus to the cultural phenomenon that became MTV. All four members are in the Songwriters Hall of Fame, and all four have written chart-topping hits on their own. At their peak, they were nearly unmatched in popularity, stuffing stadiums with writhing fans like open, super-sized sardine cans. Even now, one can still scarcely attend a club or a sporting event without hearing May's riffs; they are trans-generational. While Queen's anthem-centric 70s contemporaries sometimes court a conscious irony to stay properly relevant, Queen remains unabashed and literal. What basketball or football game would be complete without the omnipresent double-stomp and clap of "We Will Rock You" (which May wrote by himself)? It is so effective, it seems, at whipping a crowd into a froth, that the task is left to few other bands or songs to this day. Try playing Bohemian Rhapsody in a car full of people and not hear at least one of them (if not all of them) sing along from the very first verse (including clumsy attempts at the infamous high and low harmonies). In any credible list of the greatest guitarists of all time, May is almost always somewhere in the single digits. Music legends that came after Queen have almost unanimously cited them as an influence, most recently Lady Gaga citing the Queen song "Radio Gaga" as her namesake. May seemed destined for the life he seized from an early age - he designed his own iconic guitar, the Red Special, when he was just sixteen, and became a classically trained pianist and accomplished vocalist, holding his own even in comparison with Queen's own legendary Freddie Mercury.

All of this goes without saying. All of this is, more or less, known.

What people usually don't know is that Brian May is also an active and accomplished astrophysicist.

Yes, as though musical world domination were not quite enough of an accomplishment, legendary rock star not quite prestigious enough a title, Dr. Brian May - yes, as in doctorate in astrophysics - has not only bent genres, but apparently space-time as well. It is safe to say he was the only rock star in the building at NASA, shoulder to shoulder with NASA scientists and engineers, during the much-publicized New Horizon's flyby of Pluto last year. He studied reflected light at Imperial College in London before the band broke, and completed his PhD thesis there more than thirty years later, independently catching himself up on the advances made in his absence while he and Queen took over the world. He has worked (and published a book) with Sir Patrick Moore, who proceeded to name an asteroid after May. The list goes on.

I picked both sides of Dr. May's brain and tried to bring this stratospheric figure back down to earth, to see if, perhaps, achieving greatness more than once is possible for the rest of us mere mortals.

NS: For those unaware - please describe what your specific credentials are as an astrophysicist, and what you study. What does your astrophysics work entail, and what are your scientific interests?

BM: Three years physics undergrad for a Bachelor of Sciences (Honors) at Imperial College London, four years post-grad in the Infra-Red Astronomy department at Imperial College, for a PhD in Astrophysics, which I completed 30 years after starting it! And I am a Fellow of the Royal Astronomical Society.

NS: What sparked your initial interest in science?

BM: Pure fascination, and a wish to understand the Universe we live in.

NS: I understand this was your passion before the band took off - as much as the rock star life is a fantasy almost everyone dreams about, were you at all ambivalent about putting your academic career on hold for over thirty years to be a rock star?

BM: I always had the twin passions. I was lucky I was able eventually to follow them both. I think we all realize ourselves best by opening up both sides of our intellect... artistic and scientific. It's really only the last couple of generations that forgot that! If you look at Copernicus, Fox-Talbot, Newton, even Einstein ... you see this clearly - they saw no distinction between the two.

NS: I find people often think of science as cold and unromantic. What moves you about it, how can we convince people to be more enthused about it?

BM: I don't think you can do much persuading ... people either get it or they don't. But you can just open the door. That's what Sir Patrick Moore did for me. I used to beg my parents to let me stay up to watch "The Sky At Night" when I was a kid.

NS: You attended Nasa's briefing for the New Horizon's flyby of Pluto last year - and you said that they "inspired the world." I found this a fascinating dynamic--your reverence for your fellow scientists sounded a lot like the way people describe you, and Queen. How do you feel about the hero worship of musicians, as opposed to scientists?

BM: I think it's all healthy. Most of the scientists I know these days are into Rock Music and vice-versa. Matt Taylor, PI of the Rosetta mission, is a heavy metal freak! It's all good.

NS: What would you change about public attitudes and misconceptions about science, if you could?

BM: I would try to re-educate people in regards to animals, and by that I mean non-human animals. It's a basic tenet of my life that ALL life is precious, and every animal is worthy of respect and a decent life without persecution. I feel like there is a certain percentage of human beings who will never understand that. So we need to educate, and legislate, and enforce laws to protect every creature, especially those whose voices cannot be heard: children and animals. I hate cruelty, and despise those who abuse any animal.

NS: Do you find there is a difference in reception from the UK to the US in terms of people's interest in science generally? What are your impressions of the cultural differences between how much we emphasize the scientific worldview, vs. the UK?

BM: I think it's all coming together. The world is getting smaller. But I fear the world is stepping back into non-empathetic government, by which I mean the Right, those who deny the rights of the poor, the sick, the weak, and animals. In the UK we already got ourselves an awful, awful, disingenuous and unfeeling government. The government's politics are pure selfishness. I fear the USA heading in that direction under someone like Trump. Common Decency is my watchword, and I see the human race in the main heading in the opposite direction. However there are good people out there. I guess time will tell. But I sure do know what the ancients meant when they talked about "Good" and "Evil." They are both walking the Earth at this minute.

NS: Even one of your two titles would be enough for an ambitious individual. For those of us who find the task of "doing it all" daunting - do you think we could all be renaissance people, if we tried? Is it all hard work and effort, or do you think you were born with a natural inclination for multiple fields?

BM: I think it takes work and dedication, but also a degree of luck. I worked hard and was dedicated - but I was also lucky. I have been lucky to have shared moments with some of the greatest people on Earth ... from Nelson Mandela, to David Attenborough, to Tony Iommi to Virginia McKenna to Patrick Moore, to great high level operators at NASA, and so many others. I guess the great thing is to be focused on one course for sustained periods ... to succeed in one thing... to achieve excellence. And the great perk of achieving excellence in one discipline is that you get to interact with the best people in other disciplines.

NS: What's next for Dr. Brian May? Are you working on anything you're excited about?

BM: Finishing an Album with Kerry Ellis after this tour ... and then back for a bonus stint with Queen and Adam Lambert.
I'm also working on a few different books ... mainly in various areas of Stereoscopy.
Okay, Stereoscopy is my third passion.
But the hardest passion to have is living life to the fullest and dealing with love. I have that passion too... and it's nearly killed me a few times.

Brian May is due to release another captivating title under The London Stereoscopic Company - Crinoline: Fashion's Most Magnificent Disaster. The book presents a visually striking 3-D exploration of one of fashion's most disastrous yet most celebrated garments, the Crinoline, featuring contributions from fashion icons Vivienne Westwood and Zandra Rhodes. www.londonstereo.com