One month after it premiered on Netflix, I've already given each episode of "Bojack Horseman" a repeat viewing. Yet, I have a hard time finding people to nerd out over it with, mostly because they got three episodes in and said, "Meh."

Despite being renewed for a second season just four days after its premiere, there hasn't been much love for the anthropomorphic comedy -- even from the sources I'd think would love it (The A.V. Club gave it a C+). But like co-star Alison Brie said in an interview about the show, you really need to binge-watch it to appreciate it.

Or, you know, at least get past episode three.

So, if you're into animated comedies, enjoy dark humor (like, really, really dark) and have some spare time this week, here's why you should finish watching "Bojack Horseman" Season 1.

You're probably already familiar with the illustrious main cast, featuring Will Arnett (who has had so many failed comedies since "Arrested Development" that I lost count, but this role fits his raspy, pompous voice to a T) as an aging TV star who's iconic '90s persona left him rich but miserable. Then you've got "Breaking Bad" darling Aaron Paul, the aforementioned Brie, "Strangers With Candy" heroine Amy Sedaris and the imitable Paul F. Tompkins, among others. Add to that a roster of guest and recurring stars such as Patton Oswalt, Olivia Wilde, Stephen Colbert and Kristen Schaal, plus self-parodying characters like Keith Olbermann (who is portrayed as a whale) and Margo Martindale (who plays an actress gone rogue). Your ears pretty much never stop playing "Guess Who?"

2. It feels fresh and familiar all at the same time.

It's like if "Curb Your Enthusiasm" and "Ugly Americans" had a baby. Wait, no. It's like if "Arrested Development" married "Archer" and that baby married "Futurama" when it grew up. Or something. The point is, you've seen this before, but it's also totally different. There are even parallels to "Breaking Bad" in the ways that Paul's character, Todd, depends on, looks up to and is ultimately (and quite evilly) manipulated by Bojack for his own benefit. 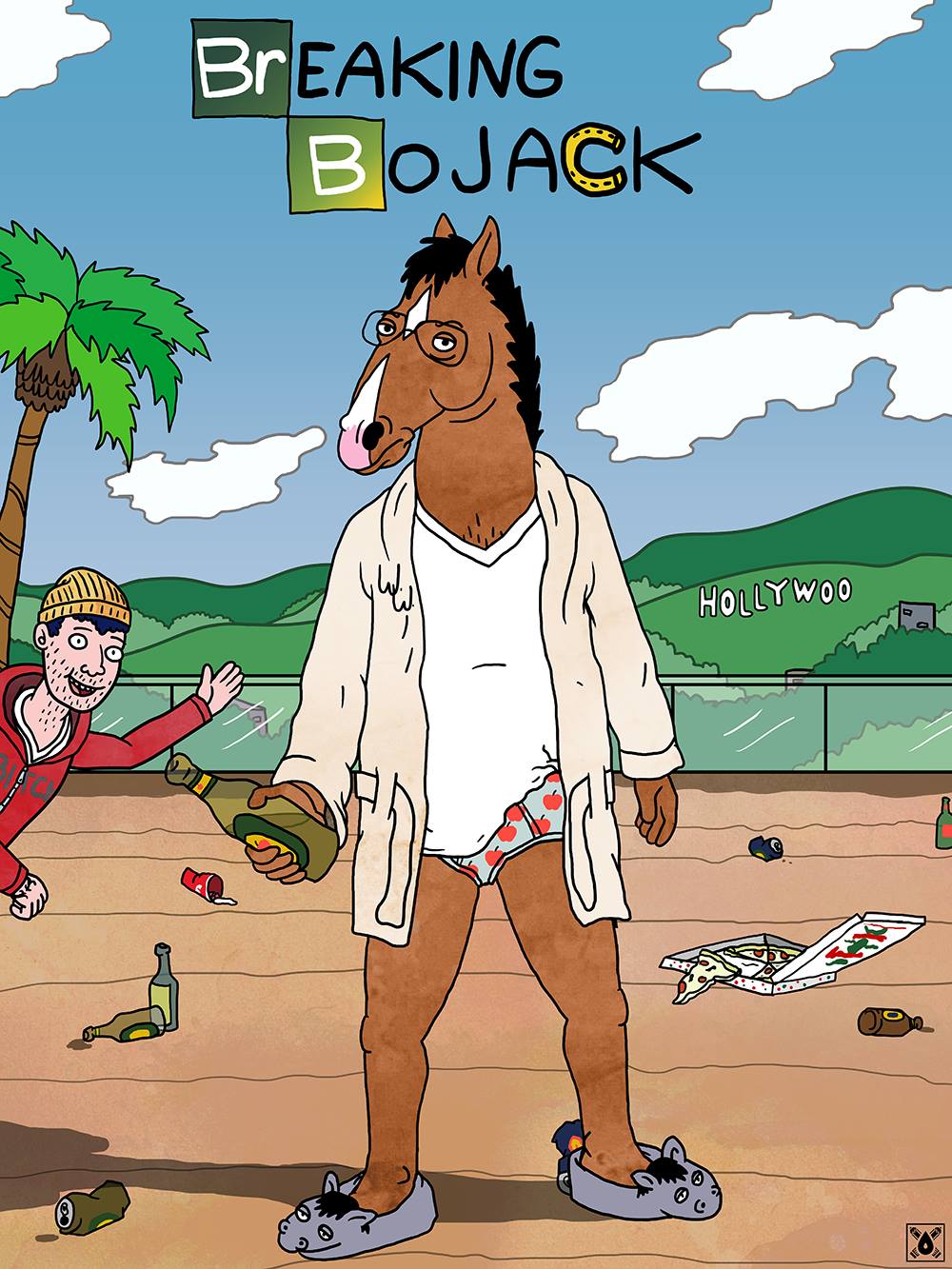 via Tumblr/HeisenbergChronicles by Cody Meddaugh

The human/animal hybrids definitely set it apart, as do the dark and meandering sub-plots that weave their way into emotionally conflicting climaxes, but it also solidified the idea of a "Netflix show" to me, when looked at in the context of the site's other young series. It has a fierce commitment to moving the plot forward, no matter how absurd, like in "House Of Cards." It has the quick-fire jokes of "Arrested Development" (which we can now technically call a Netflix show) and it doesn't hurt that they Netflix threw in a crossover scene with the beloved, "Orange Is The New Black."

3. Did I mention that it gets dark?

Vulture said it well when they called it both, "Radically sad," and, "The funniest show about depression ever." Five episodes in, a main character's father dies and, by the end of the episode, gets turned into "Chum." By episode eight, we're dealing with lifetime regrets, a cancer diagnosis and the realization that some people really never will forgive you and there's nothing you can do about it. A mentor sabotages his closest friend before we get to the disturbing "Miley Cyrus"-esque downfall of Bojack's adolescent co-star, featuring a days-long drug and sex binge. Top it all off with a suicidal flashback and a flash-forward finale that questions whether or not we really feel anything "deep down" and boom: you're going to feel the feels.

4. Its Hollywood -- Excuse me, Hollywoo -- parodies are spot-on.

Don't worry, it's not all doom and gloom. Some of the show's funniest moments come from its lampooning of Hollywood and agency culture. This is a universe not far off from our own in terms of vapid idolatry, where books can win a Golden Globe, feature film can end up as a "Bi-monthly curated box of snacks" and tourists will do anything to see what the inside of David Boreanaz's house looks like. In one of the best scenes, there's only one person in town who doesn't think "Smoodies" -- "moods" you can "drink like a smoothie" -- are the next best investment opportunity, and that's Bojack.

Oh yeah, and the original theme song is pretty good.

5. You will relate to it in more ways than you probably want to.

Hey, nobody's perfect. That's why anti-heroes are so appealing in the first place. The line between hero in villain isn't drawn so clearly in real life, and in Bojack's world, pretty much everyone has done something terrible to another person (like try to break up a wedding) or their childhoods were such that they became hilariously damaged goods (Bojack said his "Rosebud" is "The nudie magazine his uncle showed him of the three-nippled woman," and let's not even get started on Diane's family).

But it's also the little things. Diane simply asking Bojack, "Why'd you have to make things weird?" The way so many people approach an all-too-complicated feeling. When struck with writer's block, Bojack sums up the condition completely by ravenously cleaning his house before he can start writing -- even going so far as to dust-bust the vacuum cleaner. He's lazy, has an obvious substance abuse problem and tends to treat women like garbage, especially his agent. Yet, you want him to persevere. Nobody wants to wake up two decades after their prime and realize they have a lifetime of regrets.

Okay, now even this post is getting dark. How about a joke?

6. The human/animal relationships are insane and make you question everything.

I'm not going to beat around the bush here: the "Hold on, humans should NEVER have sex with animals!" alert in your brain will go off as soon as you see a woman making out with a horse. But by the third or fourth episode, and the introduction of Golden Retriever Mr. Peanutbutter as human Diane's steady boyfriend, the sex scenes become pretty mundane. It's really more the exceptions each animal/human hybrid makes in this alternate world that make your brain crazy. For example, Mr. Peanutbutter is human enough to date a smart, sensual woman but canine enough to want the mailman dead? Or, this cow can serve beef in a diner, make a snarky remark about it and move on with her day?

The rationale behind each anthropomorphic animal is mind-boggling (in a good way) but that's nothing compared to the relationship Princess Carolyn has with Vincent Adultman.

My biggest complaint about this show is that it takes until episode NINE to get to introduce Vincent Adultman, who is undoubtedly the funniest character. Adultman steals Princess Carolyn's heart when he stumbles into a bar -- literally, he stumbles because he is clearly three children stacked on top of one another under trench coat. His dialogue steals every scene as he rambles on about his "Business Factory" and drops adult-sounding buzzwords in a rouse not unlike George Costanza's "Vandelay Industries."

The best part? He's actually a great boyfriend. Princess Carolyn, so unable to see him for what he is, falls head over heels, holds his broom-hand and says things like "He listens to me" to an astonished Bojack. That's not to say Vincent doesn't have his downfalls ("He spends all day working at the business factory, so when he gets home he just wants to unwind by watching R-rated movies," Carolyn laments) but I have a feeling they are going to be very happy together in Season 2. 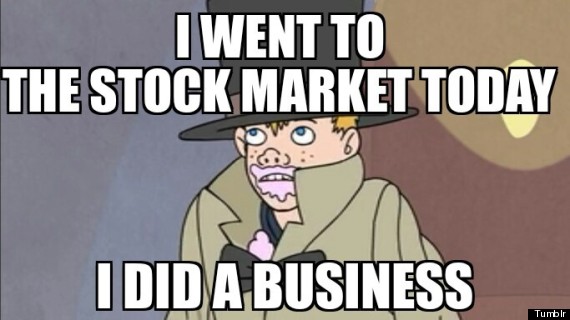 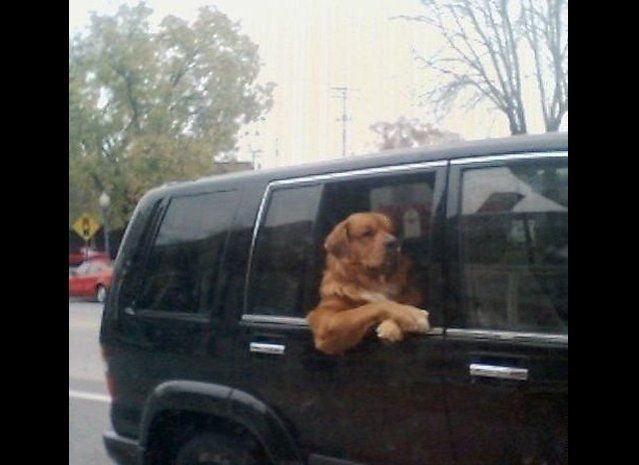