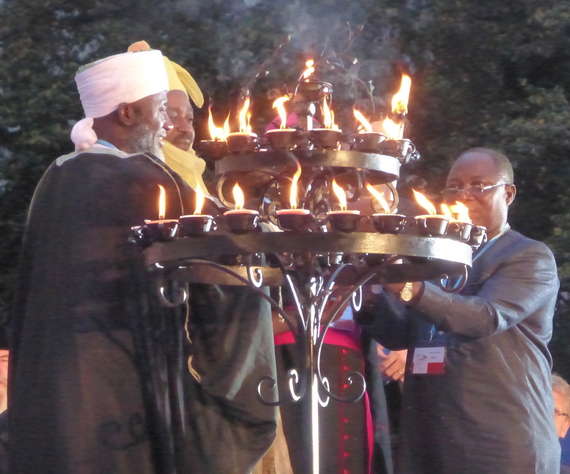 Nigeria is one of the world's most religiously active and diverse countries. It was long regarded as an admirable example of a dynamic society where different faiths lived in harmony, intermarriage was common, and a robust and open marketplace of religious beliefs and institutions represented religious freedom. Today, however, one of the most extreme of the extremist movements, known as Boko Haram, threatens basic security across large areas of the north. The kidnapping of almost 300 Christian girls in April 2014 from Chibok in Borno State by Boko Haram brought world attention to a conflict that seems to divide the country sharply along religious lines: Muslim vs. Christian.

In a robust discussion about Boko Haram in Antwerp during the Sant'Egidio interreligious meeting this week, the analogy for a seemingly worsening spiral of violence was a dark tunnel. What, a group of respected religious leaders asked, is the way out?

Muslims and Christians agreed forcefully on one point: a military response alone simply cannot succeed. Military force is needed, but with escalating military spending the situation seems to be getting worse. A large military consumes vast budget resources but, asked the religious leaders, echoing what they hear from their followers, what is the result? Fear and lack of any reliable state protection for citizens has encouraged people to arm: three in five households, it was reported, have weapons. Vast regions of Nigeria have become a killing field.

So what else is needed?

How and why has Boko Haram evolved from a small, not particularly violent, religiously focused, and local group to one that occupies significant swaths of territory, has sophisticated arms, has a global network and vision, and is truly wreaking terror in Nigeria as a nation? Also, a group whose original focus was on "bad" Muslims is now targeting Christians. Why? Understanding this complex evolution is vital to exiting the tunnel.

History comes into play but also media. At first Boko Haram focused on purifying Islam, proselytizing a puritanical (and historically non-Nigerian) vision of the faith and targeting "bad" Muslims. But the group now targets Christians. One reason is that contemporary Boko Haram in many respects has evolved as an anti-colonial movement and in Nigeria the colonial heritage is seen as Christian. Further, as Boko Haram's horizons have expanded, their interest in media attention has grown. It does not escape their attention that the media reports far more on killings of Christians than Muslims. Most of those killed to date have been Muslim but that is rarely noted. Thousands of Muslim girls have been kidnapped, many sold, with little attention. Cardinal John Onaiyekan comes under pressure from his community to focus on Christian victims, but, he argues, the Christian, and intelligent approach is to be just as concerned for the fate of Muslim neighbors.

A second major focus must be governance. The failures of the state, including lack of services, paltry development progress, and widespread, deep, endemic corruption fuel anger. Accentuating a long-standing problem, Onaiyekan argued, is the perception that corruption is to a significant degree a Christian problem because it is associated with southern Nigeria, with some specific leaders, and with the colonial heritage. Boko Haram claims that in the areas it administers governance has improved rapidly. This invites bold action to counter the claim that Boko Haram alone can fight poverty and insecurity.

The third challenge is to address the religious dimensions, a "deradicalization of the spirit". Muslim youth face especially high unemployment and see little hope for their future, but Christian youth are also subject to allures of radical preaching. Imam Ashafa and Pastor Wuye were on opposite sides as young men, ready to kill. James Wuye lost his arm. Today they work together to bridge gulfs separating communities, as activist peacebuilding religious leaders.

Many initiatives, national and local, have sprouted up, seeking to calm religious tensions and to address people's underlying social and economic needs. These initiatives could be more effective with coordination and sharing of experience. Not least among the obstacles is the fact that many who have spoken out have been killed and many others threatened. These include Imam Muhamed Ashafa who works with Pastor James Wuye in a remarkable partnership that has attracted worldwide admiration. A group came to his house to kill him, he said, but fortunately he was away. Speaking against Boko Haram is life-threatening.

There is no exit from the tunnel of violence without good government. That means providing protection for people, transparency in security spending, and programs that truly create jobs and advance human development. The millions of refugees and displaced people need effective support. And all the women and girls, Muslim and Christian, who have been abducted need to be rescued and helped.

It is important to stop the politicization of religion, where politicians enflame any ember of religious tension and turn political issues into religious ones. But it is also important, argued Imam Ashafa, to stop the religionization of politics. Religious leaders need to steer away from the temptation to see religious aspersions in any political disagreement.

Negotiations and dialogue with Boko Haram, argued the group in Antwerp, are both possible and absolutely essential. And negotiations must come with positive offers including possible amnesty and forgiveness. Cardinal Oneiyakan comesian spirit of forgiveness is essential. Imam Ashafa and Pastor James report that "these boys are ready to talk". They have met with Boko Haram commanders and are confident that with will on both sides (that means from the government which formally opposes any negotiation at present) progress can be achieved.

The Nigerian conflict is far more complex than a Muslim-Christian divide. Social, economic, political, ethnic, and historical dimensions are all intertwined. But in this highly religious country surely religion can play a unifying role under fire for talking about negotiation and amnesty. But, he says, surely it is better to talk than to shoot. And noone will lay down his arms only to present himself for execution. A Christ. Religious leaders can act together, modeling the depoliticization of religion and preaching the best of their traditions. They can reject the polarization that comes with an attitude that the friend of my enemy is my enemy; everyone can be a friend. They can recognize that women can play particularly meaningful roles, with their ability to cross lines and to build relationships across communities and support them. Religious leaders and communities can support concrete programs like vocational training programs, and they can speak out with courage and protect one another. They can help to shine light in the tunnel to find the way out.