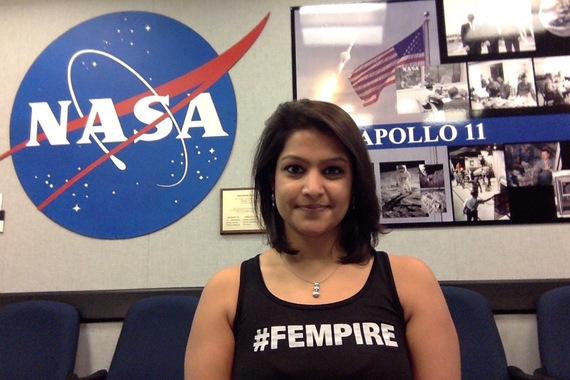 Once upon a time, not so long ago, people feared that if a woman went into space while on her period, the blood would reverse its flow into her body -- also known as retrograde menstruation -- causing pain and possible death. This was one of many false notions that kept women from being included on space missions because back in those dark ages even the world's brightest operated under socio-cultural misperceptions surrounding the still-taboo subject of a woman's "time of the month." It's been more than three decades since the first American woman went where none had gone before, and times have certainly changed. For the first time in history, in 2013, NASA boasted its first ever gender-equal training class of astronauts. Today, the female astronauts now have their very own honorary researching gynecologist, Dr. Varsha Jain, whose current research examines menstruation, menstrual suppression, and risks of blood clots in space.

And before you ask, no, she's not delivering babies in space nor will she be delivering the first Martian baby, as Dr. Jain often hears to the point that when she gave a talk during Tim Peake's current mission onboard the International Space Station she even titled it "Space Gynecology...That's babies in space, right?" and proceeded to debunk the notion that ob/gyn work is only about women giving birth to remind people that women are not only made to have babies. The other ridiculous question she regularly gets asked is whether she'll be studying sex in space -- "Um, no! It's a workplace. Would your employer talk to you about sex in your workplace?" is Dr. Jain's response to a question that was so absurd it didn't even occur to me to ask her about it. Although I did sheepishly confess that my concerns with space exploration have more to do with the existence of monsters (horror novelist in the house here) and pooping in zero gravity (I'm aerophobic with irritable bowel syndrome, hardly astronaut material), to which Dr. Jain assured me that there have been no monster sightings to date, and she's never heard of the astronauts having any problems with their daily constitution even in deep space. Whew. That was certainly a load off my mind.

The overwhelming story Dr. Jain hears over and over from returned astronauts is the incredible magnificence of the Earth from space: "The Earth is just a huge land mass, the auroras are stunning, and the sun and moon rise every 90 minutes. Photos don't do it justice. They are in the presence of the ultimate beauty that is our universe." While Dr. Jain is not on track to be an astronaut herself, "I love what I do so much that it just gives me chills to even think about going up there."

"This work is so important because women are human beings, and women can go into space as professionals behaving like normal, functional adults. People need to get more information, get informed, and get over these gender stereotypes. Get over these ancient barriers. This is 2016!"

She also comments that male astronauts are never asked about sex in space by the media, they are generally asked about science, and she hopes this same courtesy will extend to the female astronauts through her work as she dispels the various preconceived notions about women's capabilities, physical and otherwise, on space missions.

And how did Dr. Jain end up as one of the planet's sole researching space gynecologists? From the time she was a teenager growing up outside Birmingham, UK watching Star Trek, Dr. Jain had already begun looking to the stars for her future and her career. She tells me:

I've always had an interest in space, being a Star Trek fan as a teenager. Dr Beverly Crusher inspired me to do the work I do today and I certainly wouldn't want to pick a fight with Captain Janeway or Major Kira! I would like to believe that women in these strong female roles do have a part to play in inspiring young girls and women that they can do anything. At school I needed to make a decision on whether I studied astrophysics or medicine at university. I chose the latter as my desire to help people in my job outweighed all other benefits I could see from future employment. Whilst at university, I found out about space medicine and went along to a small conference to learn more. From there, I discovered I could study extreme environments medicine, which I did, and this helped me get onto a research placement at NASA Johnson Space Center in 2007.

At the time, I worked on research related to balance control mechanisms in astronauts when they returned from space. I started practicing medicine in 2008 and found myself being drawn to a clinical career in obstetrics and gynecology. However, within a month of starting ob/gyn training, I found out about a Master's degree in space physiology and health at King's College London. Undertaking that MSc was one of the best decisions I have ever made. My thesis project saw me return to NASA Johnson Space Center to investigate the health systems on board the international space station. More importantly it provided me with the necessary network that I needed to meet my now supervisor, Dr. Virginia Wotring. It has been with her help and support that I have been able to return to Houston for placements where I research female health in relation to spaceflight.

Dr. Jain positively glows with passion as she talks about space gynecology and space exploration. While she's on placement with Baylor College of Medicine's Center for Space Medicine and therefore works with colleagues at NASA, she tells me: "I usually get home at 8pm, make some dinner, and then rush to bed because I'm so eager to get up at 5am to get back to work the next day, that's how much I love what I do." That her work and research in the UK as an academic clinical fellow in obstetrics and gynecology, which involves seeing and treating patients, provides much of the funding for her three months a year doing research in Houston, speaks to what a passion project space gynecology is for her.

Dr Jain gives me the skinny on how she ended up in this fascinating role:

My official role as a "space gynecologist" only commenced recently. It's taken me years to get to the point where I am being taken seriously about the research I want to do, commonly with people often thinking I want to deliver babies in space. I feel it is my duty to educate anyone I meet, who wants to talk to me about my work, that pregnancy is not all the female body was designed for! I have given talks for clinical colleagues in the UK, presented for the USRA aerospace medicine grand rounds which were filmed and can be viewed by anyone at any time, I have been involved in disseminating this work amongst the female astronaut corps and also taken up the opportunity to speak at the launch event for UK astronaut Major Timothy Peake. I feel interviews like the ones I do with the media are important outlets to help shape in any way possible, the perception people have about female astronauts. They are selected in the same manner as their male colleagues, they go through exactly the same training protocols and in space, the scheduling of their daily tasks is exactly the same as their male colleagues. They are equals.

The only way we can change others is by changing ourselves, and when I realised the important role I could have in changing the perspective of others, I first changed how I portrayed myself and my work. Believing in myself and my work helped me get to where I am today. Every single woman is an advocate for women, no matter what her job, role, title, and sphere -- I am simply playing my role.

And when she speaks about playing her role, it's a role that she has created for herself through her own dedication and drive. Even though so many people told her that there was no need for her research and it couldn't be done, Dr. Jain persevered in her vision. She identified where there were holes in research and decided to fill them herself rather than going down the medical, scientific and research roads well-traveled. She ignored the naysayers and found the people who were willing to support her idea. She focuses on the positive, the positive she can contribute, her skills, her dreams, and finds that she's drawn to those now who share in her vision and that they can help each other on the journey.

Dr. Jain's passion about space gynecology, as well as research and her own medical practice were palpable when I had the pleasure of chatting with her and by the end of our conversation she had me thinking about space, and women in medicine and science, in a totally different way: in total awe of these forward-thinking women like Varsha and the female astronauts who have cleared so many man-made hurdles to get where they are today.

So many stereotypes about women and immigrants have been floating through the media in terrifying ways of late, and the best way to get over these stereotypes is to straight-up smash them. By learning about visionary women like Dr. Jain and getting their amazing stories out into the world is a marvelous way to combat the voices that say women are somehow less than men and not as capable of the same things.

And to all those young women out there who are just starting building their dreams, Dr. Jain has this to say:

For anyone who has a desired career path or may not have a career path yet -- follow your dreams and don't give up. It will take a lot of hard work and it won't be easy. You will be told "no" several times along the way -- that's part of the challenge. Find another way to get where you need to be and do what you have to do. But remember, be kind to those you meet along the way, even those who don't believe in you and never stab anyone in the back. Someday, you will achieve all your dreams and you will get the opportunity to inspire the next generation - make sure you can lift your head up high and tell your story -- the right way.

Many thanks to Dr. Varsha Jain for making time to chat about her awe-inspiring and important work. I'm sure we'll be hearing more about her, and soon.