Weeks before he was convicted in a widely publicized trial for allegedly running over pavement dwellers while intoxicated, Bollywood actor Salman Khan freewheeled with Fortune India's Pavan Lall on the sidelines of a movie set on early disappointment, dealing with rejection and his approach to painting. The case has gone into appeal to a higher court. The following are excerpts from the interview.

1. Your father Salim Khan says one can catch you doing anything but acting. How do you respond?

What you see is what I am. I cry and laugh on screen as I would in real life. I never play character roles like that of a 60-year-old man or a local Indian with a Bhojpuri accent. I don't do things that alienate the broader audience, so it has to be homogeneous but basic and simple.

2. What was it like breaking into movies? When I went to meet moviemakers they would say, "you should have come six months earlier, or six months later," or "you're too young right now" or "[you're] too old for this" or "we have just signed someone else," or "we are not making anything right now," or "we're looking for a big star"-- not really outright rejections, but my father had also said his share of no's to people in the industry, so I'm sure there was some sense of angst within people whom I later encountered then. I never had the problems of having no food at home or living in rented houses and so on, but I wanted to prove a point to the guys who rejected me and there were quite a few of those.

So one person I remember was producer Anand Girdhar who used to make small budget B-grade movies and was making one called "The Graduate." And so I went to meet him and I must have been 17 or 18. He was looking for someone to play a teacher who falls in love with a student, and after he met me he thought I was too young. I insisted and said I could wear a fake moustache and look older, and in turn he asked if I was going to leave his office or if he should ring the buzzer to have me escorted out. I met him years later, and, of course, I didn't recognize him, but he smiled and said, "I'm the same guy who kicked you of my office," and I hugged him and said thanks, because I wouldn't be where I was without people like him.

4. Any role models in the acting world?

I like Sylvester Stallone and Dilip Kumar, but I'm not really a fan of any actors. What I am is a big admirer of success stories of people who start out as underdogs and become successful. Stories of people who come from nowhere and reach somewhere.

5. Your thoughts on acting in Hollywood? Why would I want to go to Hollywood? If anything, I may do a Hindi movie in English -- you know, like that new catchphrase: Make in India, and sell abroad.

6. What do you dislike most about India?

That there is such little civic sense. The corruption has gotten better, and believe it or not, one of the few industries today where there's very little black money is in media and entertainment.

7. You have a reputation for being difficult to get through to in interviews. Has that to do with your disdain for the media in general?

Have I always hated the media? No, actually the media has always been kind to me, but there is always that one journalist who will come and attend a press conference or a film screening and in the middle of it all ask a question that borders on something personal or totally unrelated -- and which makes me at that point of time hate all of them. 8. Your charitable foundation Being Human is a case study for success where others in your shoes have tried and gotten nowhere. Does that get you support from your fellow film stars as well?

Actors Aamir Khan and Shahrukh Khan have promised me a few days or dates this year to help promote the foundation, so I told them whatever works will [work]. Actor Akshay Kumar wrote out a check, but most of the others also have their own charitable trusts, which is good I guess. I'm not saying you just have to give it to Being Human. Step out of your house, look right and look left, and if you see someone needy, do something about it -- give to a hospital, a school, a doctor -- sort someone's life out instead of putting money in black boxes blindly where you don't know where it's going.

9. You tinker with art and give your paintings away. Are you trained, or self taught?

I'm not taught, still learning. When I see that a color is off, or an eye is off balance, I fix it. I make mistakes and learn from them. I used to sketch landscapes earlier but don't have the patience for it today. I don't follow precise lines or form. I just go with the flow. If it comes out looking good then that's fine, if not, then I downplay the weaker, darker sides of my portraits.

10. Your first gig with the camera was a model for a cola ad. How did that go?

I was barely 15 years old and swimming at the Sea Rock Hotel and ad film director Kailash Surendranath's wife noticed me and told her husband, "this kid swims well and looks good without a shirt, hire him." So I flew to Goa and there were these professional models who were all like 6 feet and 2 inches, 6 feet and 3 inches tall standing around. I took one look, said no way, and was heading back to the car when a buddy dragged me back. That was the beginning.

11. But it was never an actor that you wanted to be, right?

That's right. In those days, it was unheard of for a screenplay writer's son to become an actor. It didn't work like that. So, I wanted to be either a director or a writer, and I worked to that end putting together a few scripts so that I could direct them. Of course, as we all know it never worked like I wanted it to.

Bollywood Superstar Salman Khan: 'Why Would I Want to Go to Hollywood?'
Salman Khan Hit-And-Run Case: What We Know 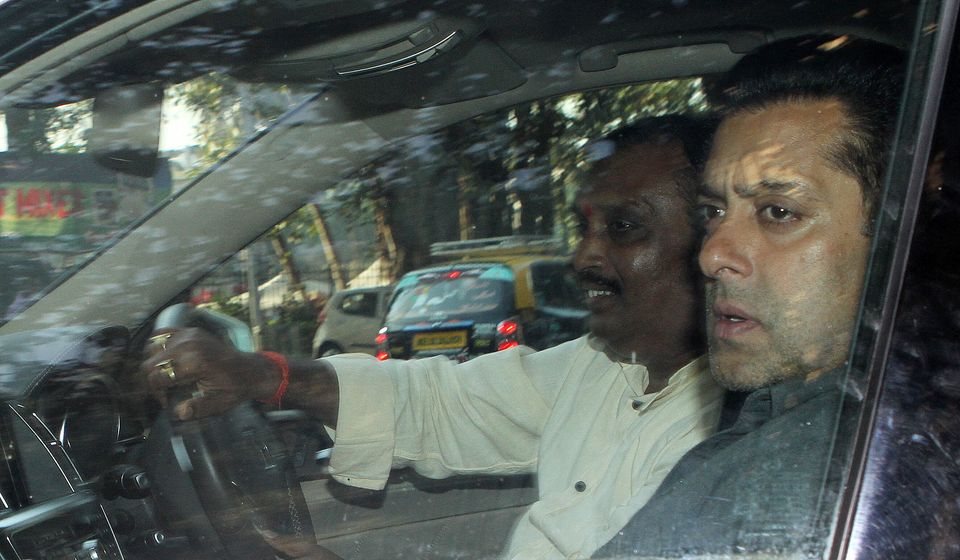 1 / 7
What was the original case?
In the early hours of September 28, 2002, Khan's white Toyota Land Cruiser rammed into the American Express Bakery in suburban Bandra, close to his sea-front home in Galaxy Apartments, before fleeing from the accident site. One pavement-dweller sleeping outside the bakery was killed and four others were injured, leading to Khan's arrest by the Bandra Police later that morning. The actor is facing charges of IPC Section 304(II) - which attracts a 10-year jail sentence, sections 279, 337, 338, 427, and under Motor Vehicles Act, 1988 and Bombay Prohibition Act, 1949.
Hindustan Times via Getty Images