In my recent trip to Brazil, I had the opportunity to learn about Bolsa Familia -- one of the most popular cash-transfer schemes in Latin America. A predecessor to this scheme is the Oportunidades which originated in Mexico in 2002.

According to the Bolsa Familia scheme, the beneficiaries receive R$70.00, which is approximately US$35.The government requires the families to send their children to school and vaccinate the infants regularly. Regular health check-ups are also recommended.

Thus this scheme helps reduce poverty by being a direct source of income for poor families who have no money even to buy food. And it ensures that the children in poor families get to go to school. This would break the cycle of poverty in the next generation, because with education, comes employment.

The government prefers to give money to the women, because they are more reliable. Thus women empowerment in remote rural and economically down classes happen.

I was skeptical. Don't the adults become nonchalant with their jobs? Don't the kids drop out from school? Doesn't any of those hundred things happen that fails the system?

I met Adriana Francisco da Silva in the Coelhos favela in the Northeastern city of Recife. She was 27 years old and already had 11 children. Luri, one of the middle children, is 8 years old and she told me that her mother worked as domestic help and her income was meagre. Adriana's husband worked odd jobs. He was a cleaner, parking assistant, worked in the construction business and whatever else paid the highest for the season. Adriana was the recipient of Bolsa Familia scheme initially. "At least there was food on the table and my children went to bed without an empty tummy." Her elder two kids dropped out from school and the news reached the officials and they suspended her Bolsa Familia income. Life has been very difficult after that. "I have readmitted them into school, so I am hoping that my income from Bolsa-Familia would restart in a couple of months. I just cannot bear to see my children going to bed on an empty stomach." 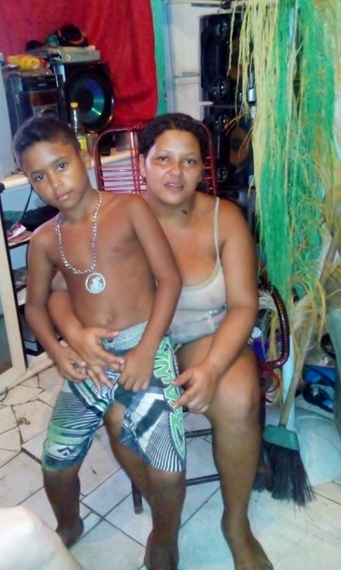 The kids get educated and they get fed. It is now on them to utilize this wonderful scheme from the government.

I asked Adriana if she would go to work even if she gets Bolsa-Familia income. "Of course, I have to. Everyone does. This scheme just ensures that we do not starve and die. But we have to work and give back to the society. When we see our children struggling hard to study and improve their lives, we feel like doing so much more for them. I feel like giving them a college education too. I do not know any of the things my son studies in school and he talks about a lot of intelligent stuff like the plants and animals and minerals and rocks. Maybe one day I would send him to college and I have to save for that."

As parents, one always try to do the best for the family. And here I could see Adriana's passion to get all her children out there into the society and making them into responsible citizens. Bolsa-Familia creates a spirit in the society, a fire in the community to excel and not let the funds all go a waste.

The Pronatec Program offers free professional qualification courses for low-income people. This has been started to perfect the positive results shown by Bolsa-Familia Program. It is financed by the Brazilian Federal Government, and this program offers courses which are taught by qualified educational institutions. The program has attracted many students and provided skilled workers to the market, since the types of courses offered take into account the opportunities in the region. 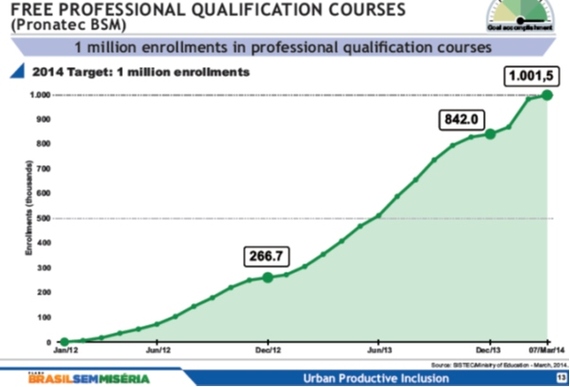 World Bank supports The Bolsa Família Program, and this program is cited as one of the key reasons Brazil has been successful in recent times in achieving the Millennium Development Goals.

So far, in over a decade since this scheme was started, 22 million people in Brazil have overcome extreme poverty conditions. And this scheme has the greatest impact on the socio-economic situation in Brazil.

The Minister for Hunger and Poverty Alleviation, Tereza Campello said, "The poor shall no longer seek the State for help, The state shall go where poverty is." 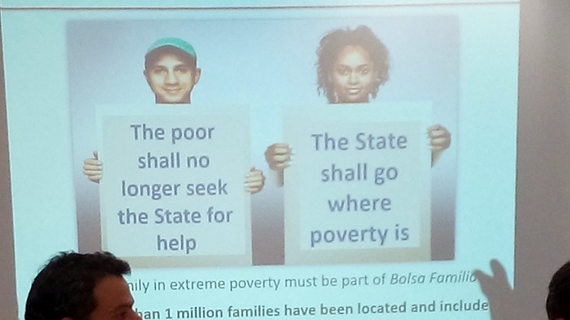 World Bank Program Manager Bénédicte de la Brière says: "Brazil has learned a lot from our partners in this process in Brazil. Today we are helping other countries understand and adapt their experiences with the Bolsa Família and other programs."

A lot of countries have modeled such cash transfer schemes like Chile, Indonesia, South Africa, Turkey, and Morocco. Even New York City has recently launched a program called "Opportunity NYC," and this closely resembles the Bolsa Família. Even a highly developed nation like the US has modeled a Conditional Cash Transfer scheme by looking at developing nation counterpart, Brazil.

Bolsa Familia show that poverty can be eradicated from the fabric of a country by educating the next-gen children of low-income people, and by giving food in return for ensuring education and healthcare in the children. This scheme mainly targets children and women as beneficiaries. Integrating it within the fabric of a nation can help improve the socio-economic denominators.

This post was written by Purnima Ramakrishnan when she traveled to Brazil with the International Reporting Project as a fellow of Journalism.