NEW YORK ― Far-right Brazil President Jair Bolsonaro blamed the international media and environmental organizations for spreading “lies” about the fires that are ravaging the Amazon rainforest during a nationalist speech that opened the 2019 United Nations General Assembly on Tuesday morning.

“The Amazon is not being devastated,” Bolsonaro said, contradicting recent media reports and even scientific data from his own government.

Bolsonaro, a former military officer who has praised Brazil’s previous military dictatorship, is facing international scrutiny for his handling of the record outbreak of fires in the Amazon, his gutting of environmental enforcement agencies and his rolling back of forest protections, and his denial of climate change ― the central focus of this year’s annual U.N. summit.

He has faced protests throughout the week from environmental groups, Brazilian activists and indigenous tribal leaders, who have warned that Bolsonaro’s policies threaten both the Amazon and the indigenous peoples who live there.

But as was largely expected, the Brazilian leader used his first United Nations address to turn that scorn back on an international community that, he said, is threatening Brazil’s “most sacred value: Our sovereignty.”

The speech, in which Bolsonaro warned that the United Nations should not become “a globalist organization,” reserved praise for only one of his foreign counterparts: United States President Donald Trump, with whom Bolsonaro has formed a strong alliance based on climate denial and theories that climate change is a “globalist” conspiracy.

Bolsonaro, 64, blamed “radical extreme environmentalism” for exploiting “the indigenous policy agenda to further the economic interests of foreign countries.” To counter indigenous leaders’ vocal criticism of his administration, he read a letter of support from a group of tribal farmers, who slammed the “lies disseminated and propagated” by international media who still view Brazil as “a colony.” International nonprofit groups, Bolsonaro said, want indigenous Brazilians to remain “cavemen.” (Bolsonaro has previously said that indigenous Brazilians have “no culture” and that it was “a shame” they weren’t exterminated.)

Despite his repeated calls to put business over ideology, Bolsonaro steeped his speech in Cold War-era tropes. He defended booting more than 8,000 Cuban doctors, many of whom serviced remote indigenous villages, from the country shortly after taking office, and he blamed legions of Cuban “agents” for instituting the “cruelty of socialism” in crisis-struck Venezuela.

“There can be no political freedom without economic freedom,” Bolsonaro said.

There can be no political freedom without economic freedom. Brazil President Jair Bolsonaro

Bolsonaro’s advisers, including “anti-globalist” Foreign Minister Ernesto Araujo, reportedly consulted former Trump adviser Steve Bannon ― a conspiracy theorist, rabid white nationalist and former editor of the right-wing website Breitbart ― in writing the speech. The result was a nationalistic rant that hit all of Bolsonaro’s favorite notes even beyond the environment.

He railed against gender ideology ― a central tenet of his anti-LGBTQ views ― saying that it has “invaded the human soul” in an effort to “expel God.” He delivered a passionate rebuke of the “political correctness” that has apparently taken over the world.

He cited Brazil’s high crime rates in touting his efforts to ramp up Brazil’s deadly war on drugs, saying that the number of recorded homicides has declined this year.

“Brazil today is a safer and more hospitable country,” he said. But even as Bolsonaro noted the killings of more than 400 police officers, he made no mention of police brutality incidents that have plagued many Brazilian cities, including Rio de Janeiro, where protests have erupted after police shot and killed an 8-year-old girl last week.

Other indigenous leaders also turned Bolsonaro’s claims of sovereignty and colonial motivations back on him.

“The Amazon does not belong to any of us, but to all of us. The animals, the land, the soil, the air ― all the spirits there ― they belong to the entire world,” said Sonia Guajajara, the national coordinator for APIB, which represents more than 300 indigenous tribes in Brazil. “And that’s why Bolsonaro needs to be accused of a crime against humanity.”

“Bolsonaro,” Guajajara said, “is a colonialist who disrespects democracy.”

During the address, Bolsonaro also glommed onto Trump’s religious freedom initiative and thanked Israel for the “support received to fight recent disasters in my country.”

“As expected, Bolsonaro’s speech at the United Nations has doubled down on division, on nationalism and on ecocide,” Brazil’s Climate Observatory, a nonprofit network, said in a statement after the speech. “The President has once again embarrassed Brazil abroad by giving up the country’s long-standing leadership on the environment for the sake of ideology.”

Bolsonaro’s speech opened the assembly, as is tradition for Brazilian leaders. Trump immediately followed, launching into a similar tirade against so-called “globalists” at the world’s largest annual gathering of international leaders. Trump, too, blasted the media and academia for waging a supposed “all-out assault” on “free society.”

“The future does not belong to the globalist,” Trump said. “The future belongs to patriots.”

Brazil's Jair Bolsonaro Defends Deforestation: 'The Amazon Is Not Being Devastated'
Brazil Protests 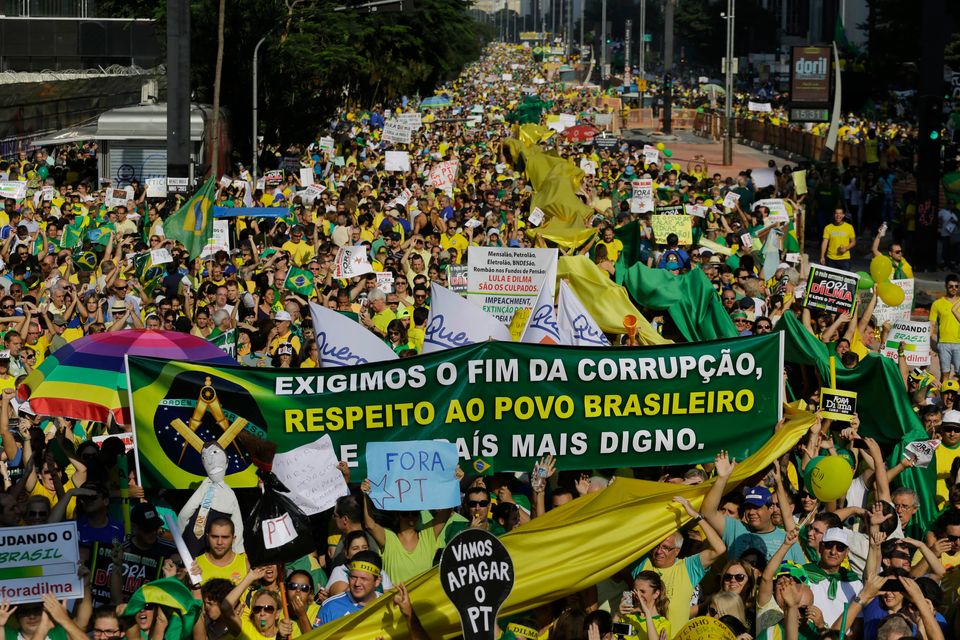