A church in Newtown, Conn. has been evacuated after reports of a bomb threat, according to the Associated Press.

UPDATE: Police gave the "all clear" sign at the church at around 1:15 p.m. Sunday, according to NBC News.

The evacuation occurred during noon mass Sunday, just two days after the town experienced a massacre that left 8 adults and 20 young children dead.

From Tim Shaffrey of the Associated Press:

NEWTOWN, Conn. -- Worshippers hurriedly left a church Sunday, saying they were told there was a bomb threat not far from the elementary school where 20 kids and six adults were massacred.

At least a dozen police in camouflage SWAT gear and carrying guns arrived at the St. Rose of Lima Church. An Associated Press photographer saw police leave carrying something in a red tarp.

There was no official report from police about the threat or evacuation.

Shooter Adam Lanza, his mother and eight of the child victims attended St. Rose of Lima. It is a Roman Catholic Church with an adjacent school, which Lanza attended briefly.

It's not clear if there actually was a threat or if, like many tragedies, whether it was a hoax or the result of a community on edge.

CORRECTION: An earlier iteration of this story incorrectly spelled the town's name as "Newton." The town is Newtown. 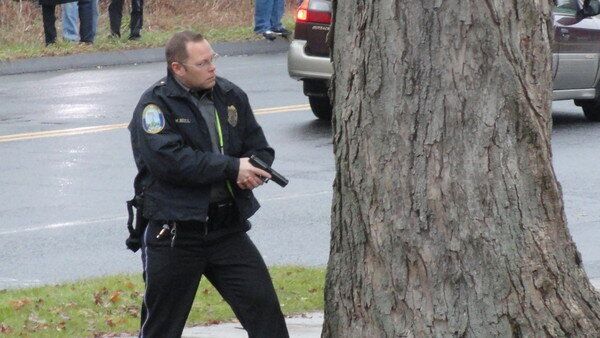 1 / 12
St. Rose Of Lima Evacuation
Tons of officials swarm St. Rose of Lima Church in Newtown Sunday following an anonymous threat that prompted an evacuation in the middle of a Mass. It was intended to honor the victims of Friday's shooting. Credit: Aaron Boyd
Aaron Boyd / Newtown Patch