I have friends in Iraq, Iraqi friends, many of them Sunnis, living in areas and cities north of Baghdad. I became friends with most of them in 2004-2005 while serving as a civilian Department of Defense official on a U.S. Embassy team in Tikrit. Some of these friends were circumstantial and conditional. I did control large amounts of cash, at one point I had $26 million in $100 bills in two safes where I slept in one of Saddam Hussein's former palaces. Of course, money makes friends. Yet some of these friends were genuine, men with whom I shared not just common interests and passions, and exchanged tales of families and future plans, but with whom I endured hardship, suffering and combat.

My Iraqi friends are fewer in numbers now, their ranks thinned by murder and slaughter; some killed by the very people who comprise the army of ISIS, the Islamic State of Iraq and al Sham (the Levant or Greater Syria). ISIS is a horrific and barbaric phenomenon; with roots in the worst of the groups that arose in Iraq following our invasion in 2003, groups that wrought unimaginable years of terror on the Iraqi people. Large numbers of non-Iraqis form the core of ISIS, young and not so young men from the Islamic world, who have traveled to wage an unholy crusade to establish an Islamic caliphate in the Middle East. On their own, these postmodern Muslim Knights of the Templar consist of hundreds, maybe thousands, and, in a perfect world, should be dealt with harshly by local Iraqi forces, leaders and justice. However, those local forces in northern Iraq, Sunni forces, are allied with ISIS and are the reason for the recent routing of the Iraqi Security Forces and the capture of Northern Iraq.

It is for this reason, with the full recognition and understanding of the danger and horror engulfing my Iraqi friends, that I have to argue against U.S. military action in Iraq. 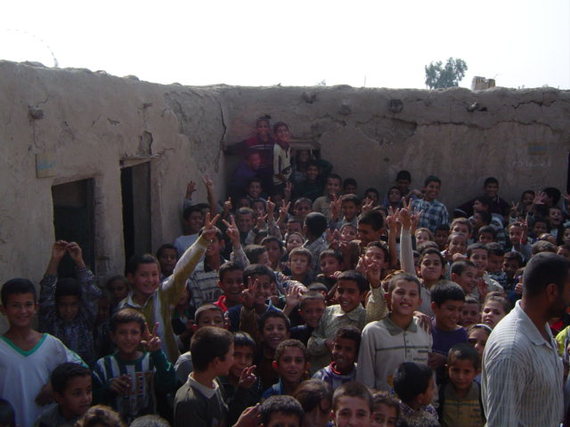 Young Sunni boys in Salah ad Din Province in Iraq clamor not just for the photograph, but for the promise of our occupation in 2004. Of those who survived the last ten years, I imagine many of these boys make up the ranks of ISIS and the current Sunni insurgency.

Let me get my guilt out of the way. My guilt over the war, my participation in it and what was unleashed on the Iraqi people, is a primary cause of my Post-Traumatic Stress Disorder and Moral Injury. Like hundreds of thousands of other veterans, I will struggle to manage those disabilities the rest of my life (I recognize my suffering is insignificant compared to the suffering of the Iraqi people).

How simple it would be to re-engage, to try and right a wrong through action, through forceful, demonstrative, and deadly action. However, the nature of this war in Iraq is political, a struggle between sects for control of population, resources, money and governance. It is a split among ethnicities and among religions. This civil war in Iraq is a war caused by our invasion and nearly decade long occupation, no doubt, but it is a war that will only worsen if the United States once again returns and takes a side. In its current form, in northern Iraq, we see a Sunni dominated movement, headlined by ISIS seizing control of Iraqi cities, sending both Iraqi military and population fleeing, nearly all non-Sunni members of the military and the population

I was in Iraq, serving with the Marines in Anbar Province, in 2006 and 2007, and saw first hand the abatement and diminishment of violence in that part of the country. With no amount of uncertainty in my mind, that drop in violence was caused by the re-integration of the Sunnis, in particular their traditional tribal leadership, into the Iraqi systems of power and revenue, and not by added American troops or celebrity generals. For several years, violence remained, but relative to previous years, the daily count of the bodies of the dead was much reduced. Following the departure of American forces, and American money, in December of 2011, Prime Minister Nouri al-Maliki's Shia dominated government began to upset the balance, once again disenfranchising and marginalizing Sunnis. The result has been a return to the bloodshed and the carnage, horrifically to levels not seen for years, and a resumption of Sunni leadership and society searching for partners that could help the Sunnis regain what they felt was unjustly usurped from them in 2003. That partnership has been manifested with ISIS.

American military involvement will serve as an accelerant to and a prolonger of this Iraqi civil war. American bombs, bullets and dollars will further strengthen the bond between Sunnis and extremist groups like ISIS, increasing Sunni desperation by intensifying their backs to the wall dilemma and justifying the propaganda and rhetoric of ISIS: a narrative of a Western campaign of international subjugation enacted through Shia, Kurdish and Iraqi ethnic minority puppets. Further, such American support will strengthen the resolve of the al-Maliki government not to reform and not to address Sunni grievances. With the renewed backing of American might and money, al-Maliki's government will feel no need to restore a balance of power in Iraq and will continue a policy of disenfranchisement and marginalization of the Sunni population and leadership. Only by withholding support to al-Maliki's government, and not by sending advisers, tomahawk missiles or cash, will there be a reason for al-Maliki's government to negotiate and seek peace.

Putting U.S. troops back in Iraq, while assuaging our well deserved and well earned feelings of national and personal guilt, will put Americans once again in the middle of a religious, sectarian civil war. As with so many modern wars, a solution lies not in violence, but in accommodation; not in division, but in unification; and not in killing, but in compromise. The United States has an obligation in Iraq, our war there from 2003-2011 is the bloody stain of my generation's soul, but our recourse should be to find and force a political solution through pressure on al-Maliki's government and dialogue with Sunni leaders. To make the mistake again of sending American troops to Iraq will turn our stain into a bleeding wound.

If my friends in Iraq will ever find peace, if their children and their grandchildren have any chance of growing up without the butchery of beheading knives and the devastation of car bombs, it will come through negotiation and settlement, as it briefly did post-2007, and not through an American strategy of taking sides in a civil war and indulging in the self-satisfactory and guilt-erasing, yet illusory, medication of bombing.