My love for Bon Jovi has spanned more than 30 years. In fact, the older I become the greater that love becomes. My twitter handle, @jonbonjovious, has introduced me to many amazing people. It generates conversations that I imagine would not be ordinary otherwise.

At the end of a Twitter party, I received a tweet declaring someone wanted to share with me their Bon Jovi experience. Trust me. It happens all. the. time. I love these stories. Some of them are downright fun and make me green with envy. This one? This one is different.

Heather, from Ten Kids Two Dogs, has a story that as I read, warmed my soul and brought tears of joy.

The story begins with Heather in the hospital, having just delivered a son. The woman's a saint having eight of her children each 11 months a part, but that's another story!

Heather's family is from Rumson, New Jersey. In the bordering town of Navesink, live Jon Bon Jovi and his wife, Dorthea.

Anyone who has followed Bon Jovi knows that this is a group of men who are charitable.

Jon has created the Soul Kitchen and the JBJ Soul Foundation. Dorthea is a supporter and driving force behind many of the charities. In fact, it was Dorthea, Jon's wife, who reached out to Heather upon hearing of Heather's daughter, Kylie, who was born with the world's rarest bone marrow failure disease, Diamond Blackfan Anemia.

Dorthea poured out compassion and shared that the band was playing a concert for charity in June (2000) at Asbury Park Convention Hall. The proceeds would be going to a local food bank, a sick children's clinic and, they'd like to include Heather's daughter, Kylie Jae Monica. 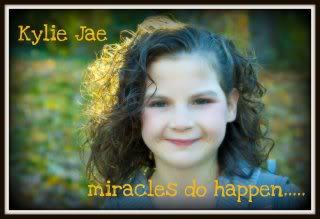 This is a band that has brought a stadium of thousands to their feet, taken home awards, written hit songs and been an icon for nearly three decades and yet, here, in this moment, they remembered their roots and used their talent to help this family.

It didn't stop at the charity concert that night. Each member of the band signed a guitar from their CRUSH Tour and auctioned it off for young Kylie Jae. All in all, this band from New Jersey raised $50,000 for Kylie Jae, giving her opportunities she wouldn't have had without them. It lifted a burden from her parents and gave them all blessings: a custom wheelchair to hold Kylie's ventilator, suction and feeding pumps, allowed them to pay medical bills and convert their 15-passenger van to handicap accessible.

Long after the charity concert and the guitar's auction, the Jersey boys reached out to this family, through their managers, eager to know how Kylie was doing. This continued until a few years ago when they inquired how Kylie was doing after her stem-cell transplant.

The band rallied their friends, fortunate in talent, who together, gave so much to this family to make life with a sick child a little easier. Kylie's home had an addition and handicap ramps added and all of Kylie's 24-hour private nursing was paid for by John Mulhern and Bruce Springsteen.

"We will forever be Paying it Forward for what was done for us. Today, our daughter, who was supposed to die before she turned two, is a twelve-year-old in Junior High School. She is on Stage Crew for the school play and was chosen as the Student Ambassador for all sixth graders at her school (the largest intermediate school in New Jersey). She is here today, partly because she was given carte blanche access to specialists out of state because of her amazing bunch of rockin' benefactors."

This isn't a family that feels sorry for what many would consider a burden.

"Our families goal is to inspire others to give to those in need...we created a local foundation called Grateful Giving and our mission statement is to "teach our children to give in gratitude for what they have been given... to bless others in the ways that they have been blessed. And to share their love and compassion with those needing comfort and support."

You can learn more about Kylie's journey, starting in 2003. It's a story that regardless of the season gives one the ability to look forward, to find hope and above all else, believe in miracles.