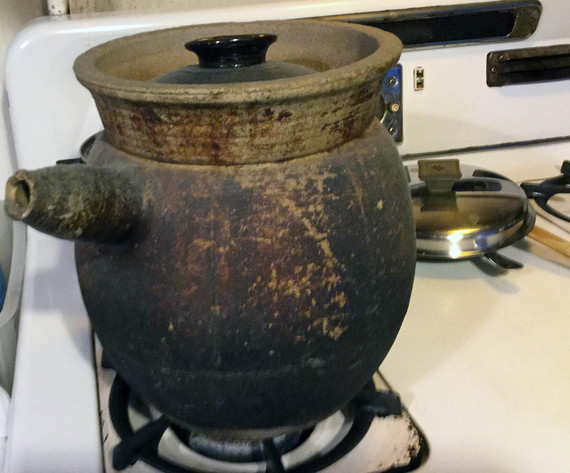 From ancient time, one of the foundations of the Paleolithic diet is "bone broth," the clear, concentrated protein-rich elixir that Chinese herbalists and chefs have known more or less forever as healing stock. Our ancient Ice Age ancestors probably made theirs by sinking fire-heated river stones into the stomachs of mammoths they were able to hunt in a cooperative effort, and the subsequent festivity and banquets for the hunters and tribes would be this bone soup, a communal broth as a life sustenance as well as a tribal bonding ceremony. Growing up in China, our Cantonese family always celebrated all festivals, New Year, August Moon Festival... with the bone soup. In time, this bone broth becomes a staple of southern Chinese culinary diets as well as a medicinal supplement to many ailments.

Recently, in Traditional Chinese Medicine, Chinese doctors have started to prescribe bone broth as a form of immune booster, possibly taking a cue from the fact that in bone marrow there are agents of immune cells. And in TCM theory bone marrow enriches the kidney function -- the kidneys are the organs responsible for one's general bone formation and health.

In my own personal history, when our family emigrated from China to America, the only family heirloom we brought along as our carry-on was an antique 100 years old soup clay pot, and contained within it was a special drunken chicken bone soup stock. And surprisingly, we passed the custom without a ripple. Now, being trained as a Classical Chinese doctor, I have the honor of being the keeper of the priceless clay pot.

Within the Taoist five-element theory of relationships, the reason in using clay or earthen pot to cook derives from its theory of fire generates earth while it will conquer metal -- in another word, fire has a benevolent relationship with the clay pot and an antagonistic one with metal. Conceivably, the heat from a clay pot may be gentler and more even than a stainless steel one.

The following is a recipe taken from my book, Healing Cancer with Qigong published by Ancient Taoist Practice Society, Inc. 2014.

Heat the olive oil in a large pot. Place the garlic, ginger and chopped onion or (soaked overnight Kombu) in the pot. Let it simmer for 30 seconds. Place the beef bones in the pot and brown them -- this will seal in the juice. Pour water into the pot and bring to a boil. Lower the flame and cover the pot, let it simmer for four hours. (Add water if too much liquid has been evaporated.) Ready to be served. Let it cool down to room temperature. Any leftover can be stored in a glass jar in the refrigerator for the next several days.

During my residency at the TCM medical school in Guangzhou, China, I once posted this question to my herbal professor: "Can there be an bone broth alternative for vegetarians?"

She answered, "Yes, you can substitute the bone with fish." A typical misunderstanding of vegetarianism. Hence, I have to clarify it within the cultural context of the vegetarian being a Buddhist monastic who vows against harming any animal life form.

"Ah, why don't you say so in the first place," the herbalist ruminated for almost a minute, and continued, "Well, in this case, you can substitute the bone with burdock roots -- the bone of vegetables."

Thus, for the strict vegans, you can substitute the above recipe with burdock roots.

written in year of the Green Wood Bighorn Sheep