Six months after Audrey Pollard, a New York post office worker, signed up for the marrow donor registry, she was matched to a man in England, desperately in need of a bone marrow transplant.

A special meeting was arranged March 8 by the New York District, the NY Blood Center, and Be the Match Foundation where Worrall, celebrating his 40th birthday, got to meet and thank Pollard.

The event was an emotional one for both, as the realization and enormity of their connection began to settle in.

"I never imagined I would feel the way I did when I met him face to face for the first time," Pollard told The Huffington Post in an email. "As I was sitting in the chair during the ceremony, the impact of what I did for him finally hit me. I had saved his life."

The two had previously kept in touch via email, exchanging cards and occasionally talking via webcam to meet each others' families. But they forged a different kind of bond the second they met in person.

"...As I prepared to step on the stage to meet with her, all of a sudden the impact of her decision to join the bone marrow register began to dawn on me," Worrall told The Huffington Post in an email. "Specifically how not only my own life was affected, but hers, too. My family's life and also that of my girlfriend and her family. So many lives were touched and affected in such a profound way by her courageous decision."

Pollard and her family plan on visiting Worrall in England, and insist that in a way, they have become family as well.

"When Mark walked through the doors, I felt as if a long lost family member had returned," Pollard wrote. "With the first embrace I felt as if a solid bond had instantly been formed between myself and him. I feel such a close connection to him. I told him that he is my brother and I am his sister. I don't know if words can fully express the connection I feel with him."

To get involved with the Be the Match Foundation, click here.

See photos of their meeting below: 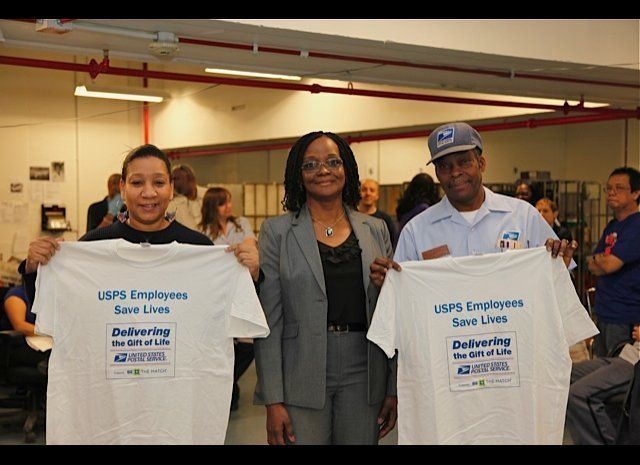