Neanderthals apparently created the oldest known examples of a kind of bone tool used in Europe, thus raising the possibility that modern humans may have learned how to make these tools from Neanderthals, researchers say.

Neanderthals were once the closest living relatives of modern humans, dwelling across a vast area ranging from Europe to the Middle East to western Asia. This ancient lineage of humans went extinct about 40,000 years ago, about the same time modern humans expanded across the world. 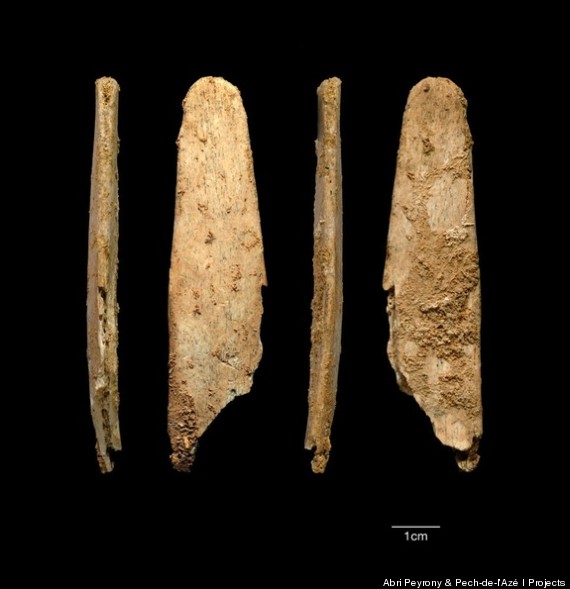 Neanderthals may have crafted what are the oldest examples of a kind of bone tool called a lissoir, which was used to smooth out hides to make them tougher. Here, the most complete lissoir found during excavations at the Neanderthal site of Abri Peyrony in Europe.

Neanderthals created artifacts similar to ones made at about the same time by modern humans arriving in Europe, such as body ornaments and small blades. Scientists hotly debated whether such behavior developed before or after contact with modern humans. [The 10 Biggest Mysteries of the First Humans]

"There is a huge debate about how different Neanderthals were from modern humans," said Shannon McPherron, an archaeologist at the Max Planck Institute for Evolutionary Anthropology in Leipzig, Germany.

Now, McPherron and his colleagues have discovered that Neanderthals created a specialized kind of bone tool previously only seen in modern humans. These tools are about 51,000 years old, making them the oldest known examples of such tools in Europe and predating the known arrival of modern humans.

The bone tools in question are known as lissoirs ("polishing stones"), which are used to smooth out hides to make them tougher, impermeable and lustrous. Scientists unearthed fragments of four examples of such tools at two Neanderthal sites in southwestern France. The uniform smoothness and rounded edges of the lissoir tips probably resulted from scraping, thus hinting that they were, indeed, used against soft materials such as hides.

"We have found an entirely new aspect of Neanderthal behavior," McPherron said.

Until now, all known Neanderthal bone tools researchers found "have looked just like their stone tools," McPherron said. "In other words, Neanderthals looked at bone as just another raw material to flake into stone tool types like scrapers, notches and hand axes."

"Modern humans, on the other hand, made lots of different kinds of bone tools that took advantage of the properties of bone, to be ground into specific shapes like points, awls and smoothers," McPherron added. "Here, for the first time, we have evidence of Neanderthals doing exactly the same thing. They were taking ribs and shaping them into a tool that looks identical to the modern human tools found 40,000 years ago and to tools still in use today for preparing hides."

"What this means is that Neanderthals did, in fact, recognize that bone could be worked in special ways to create new kinds of tools, and in this way, Neanderthals are not different from later modern humans," McPherron added. "For many researchers, specialized bone tools were thought to be one of the technologies that separate the two groups of humans. This is no longer the case." [Top 10 Things That Make Humans Special]

McPherron cautioned that the researchers are not suggesting that Neanderthals were the first to make bone tools.

"There are sophisticated bone tools that are even older in Africa, for instance," McPherron said. "Neanderthals were, however, the first in Europe to make specialized bone tools."

"The date we have of approximately 51,000 years old is earlier than the best evidence we have of modern humans in Europe, but it is still close enough that we have to mention the possibility," McPherron said. "What we need to do now is look in even older sites for these same tools, to see if Neanderthals had been making these tools for much longer."

"I think that as others look for this bone-tool type amongst their small bones, we will find many more," McPherron added. "I suspect that this new aspect of Neanderthal behavior was actually rather widespread."

For now, these findings "are the best evidence we have that Neanderthals were capable of inventing on their own one aspect of what has been called modern human culture," McPherron said.

The scientists detailed their findings online Aug. 12 in the journal Proceedings of the National Academy of Sciences.