New high-resolution images from Google Earth reveal the size and extent of the Davis-Monthan Air Force Base, where the United States Air Force sends their outdated and decommissioned planes to rest.

As reported by the Telegraph, "The Boneyard," as the location is known, covers 2,600 acres and houses over 4,200 military aircraft valued at roughly $35 billion dollars.

The location holds aircraft there for a variety of reasons. Some planes are held for long-term storage, some are scavenged for spare parts, some are held for short-term storage or sale, and others are later restored to flight status. The location has also been utilized by Hollywood as a set for movies such as Transformers: Revenge of the Fallen.

A base spokesman explains why the "Boneyard" is ideal for storage:

"This area was selected for two reasons. The first is Tucson's dry climate minimises damage caused by corrosion. The second reason was the ground under the site consists of about six inches of dirt topsoil."

The BBC has a taxonomy of the types of planes housed at the site, which include B-52 Stratofortress bombers from the Cold War-era, F-14 fighter planes (which retired in 2006 and had a cameo in the movie Top Gun), and others.

See photos of "The Boneyard" from Google Earth below. 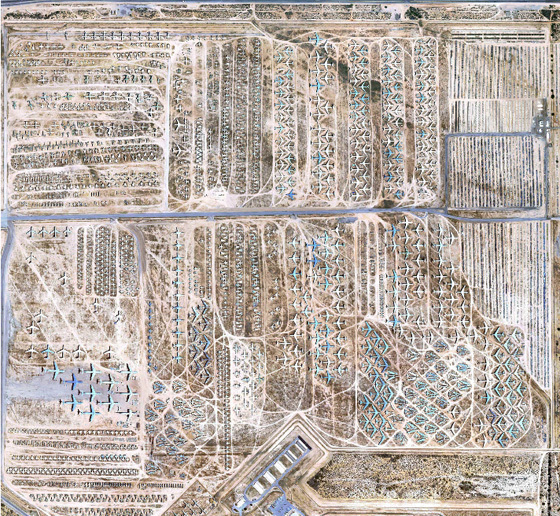