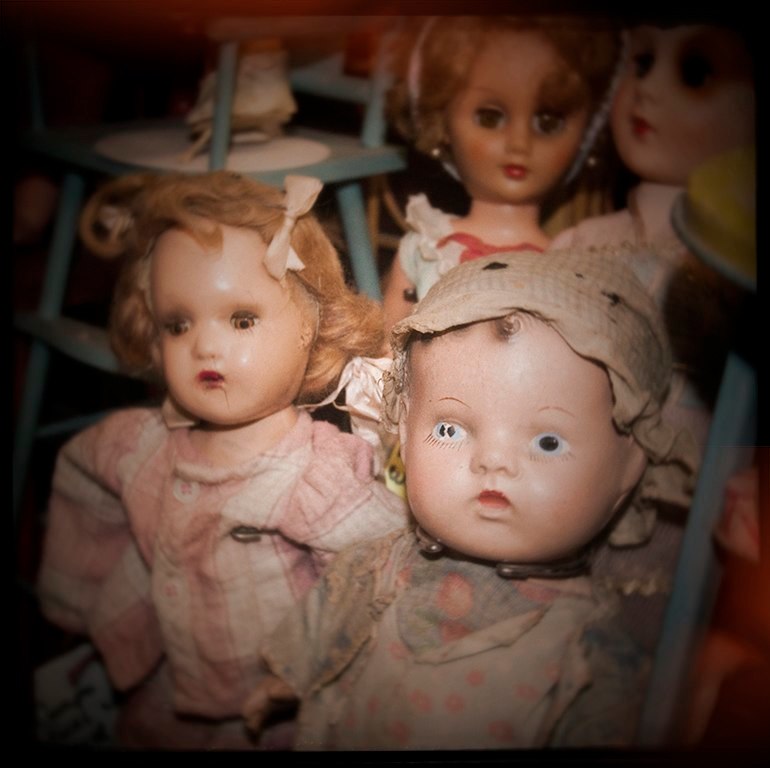 "Way back, when Walt Disney came out with the movies in theater... the first time I saw Tinkerbelle go up to the screen... I decided I wanted to do that," says Bonny Lhotka of one of the early experiences that inspired her as a child to grow up and become an artist. Lhotka, who graduated in 1964 from Bradley University -- having been schooled in printmaking and painting -- did just that. She became an artist, and has since gone on to exhibit her unique form of digital and mixed-media prints worldwide.

Lhotka's art has been commissioned by and/or resides in the collection of several hundred patrons, including United Airlines, Lucent Technologies, Wells Fargo, Charles Schwab and the U.S. Department of State. She is the winner of a Smithsonian/Computerworld Technology in the Arts Award, and in 1997 Lhotka organized Digital Atelier: A printmaking studio for the 21st Century at the Smithsonian Museum of American Art, which included her being an artist-in-residence there for 21 days.

Lhotka uses her impressive wealth of talent and her pioneering skill set to inform others through speaking engagements, educational forums, podcasts and visual art, and most recently through her recently published book, Digital Alchemy: Printmaking Techniques for Fine Art, Photography and Mixed-Media.

Last year, Lhotka exhibited at Walker Fine Art in a group show and this year will exhibit solo there in an exhibit entitled Horizons, and over six months via email, post mail and phone conversation, she took the time to share her heart's artistic passion -- the pulse of her life's work.

Max Eternity (ME): Hi Bonny, thanks for taking the time to speak to me on behalf of the Huffington Post and AD MAG.

Bonny Lhotka (BL): I'm glad to do it. That's a very nice magazine you have online.

ME: I want to ask about your early beginnings as a traditional artist, then how you became a digital artist. What inspired you to be an artist?

BL: Way back, when Walt Disney came out with the movies in the theater. The first time I saw Tinkerbelle go up to the screen and the image fell out of the brush, I decided I wanted to do that. The other thing was a field trip to the art institute of Chicago. I saw an exhibition of Seurat, Cezanne and Monet. Seeing those original oils in person, I remember that to this day. That luscious surface as opposed to what I had seen in a book. I was just drawn to that.

My training in college was in printmaking and painting. I did acrylic and collograph prints, and oil painting. I worked like that through 1990. Then in the Denver, the art market plummeted. There were no sale, little interest. I decided I would give up my studio, or expand and create something beyond traditional media. At that time HP [Hewlett Packard] had come out with the first color printer. When I saw a print at a MacWorld convention in San Francisco, I knew at that moment the direction I wanted to go.

At MacWorld I figured out what I needed to go that route; it was about 1992.

Had life been different, I would have ended up being an accountant or going into medical research. At one point I thought to be a speech therapist. But it made more sense to stick to my training in fine art.

ME: How did you go from there? What did you start out doing first?

BL: I heard about a workshop that Dorothy Krause was giving called Beyond the Digital Print. It was a workshop combining traditional printmaking with inkjet. I met Dorothy and Karen Schminke. The three of us from that day on began a collaboration to gain access to equipment and test it for fine art applications.

We have written hundreds of articles about the research. Even today we continue to explore; getting feedback to artists and companies of what we'd like to see in the next generation of hardware.

I think what's important is that none of us liked the straight digital print, so because we came from the traditional background we were missing that experience. That's what drove us to create all these new techniques of mixing traditional and digital.

ME: In the past we have referred to artists who work in multiple mediums as multi-disciplined artists. But a few years back I came up with the term TADAE, which stands for Traditional And Digital Artist Engineer, because it occurred to me that some artists weren't just working in a variety of media, they had also become entrepreneurs, writers, programmers, engineers, inventors, editors, publishers, educators and the like. You're working on a book right now. You're also an inventor, and you've got your own line of products, called DASS.

BL: I'm an inventor and I apply my creativity to get to where I want to go. I see an end vision -- working backwards to a starting point. I draw on common everyday observation in material and experience to find a solution to create the image that I'm after. When I wanted my digital prints to look like they were on plaster, I researched frescoes, how they were made; the chemistry of it. I applied that research with what I had in my kitchen, putting together the gelatin and calcium carbonate. I found that any liquid I could convert to a gelatin state, I could lay [a print] on it and the image would move to the gelatin. You could never do this with an inkjet.

That gelatin can be made with marble dust, sand, ground up gravel, and other things.

So it's that treating the inkjet print on film as the plate. That would be parallel to a traditional ink plate, which can be treated a variety of ways, making part of it scraped away to create one of a kind pieces of artwork. 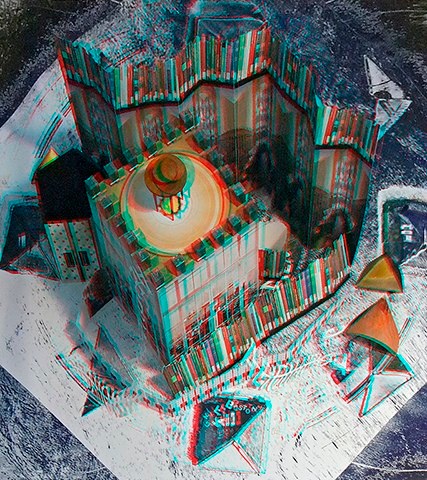 ME: But of course, as you probably know, the art world can be sometimes be a very conservative place, often resisting change. Have you experience with this?

BL: I still think there's a resistance today amongst collectors thinking of digital prints of something of value.

We had our first exhibit of digital prints in 1994 at Sandy Carson Gallery. It was the most people she had ever had at an opening. And when we did the event at the Smithsonian, people show up angry and hostile, saying that it was not art. The curators didn't know what to think.

ME: So, has this mentality changed at all? What's stopping collectors from taking digital prints as seriously as they should?

BL: [sighs] The ease at which an artist can use the editioning process, and the lack of a guarantee; it's just too easy to make them. And I think that's what has driven me to combine the hands-on, because the digital part of it is just a step to get to where I'm going.

ME: Art forgeries are historically legendary. There's the real possibility of fakes, with oil paintings and other traditional media?

BE: It's a lot harder to fake an oil in quantity.

I have seen very few signed limited edition digital prints, and certainly photography is 98% of the market. And photographers have never really limited what they did. So fine art artists are fighting that paradigm set up by photographers.

Certainly, prior to digital imaging, artist could only integrate photography into collage or a transfer method that was very toxic, similar to what Rauschenberg did. Artists were sampling and collaging from newspapers and magazines.

I think it's strange how the marketplace has to put a tag on someone. 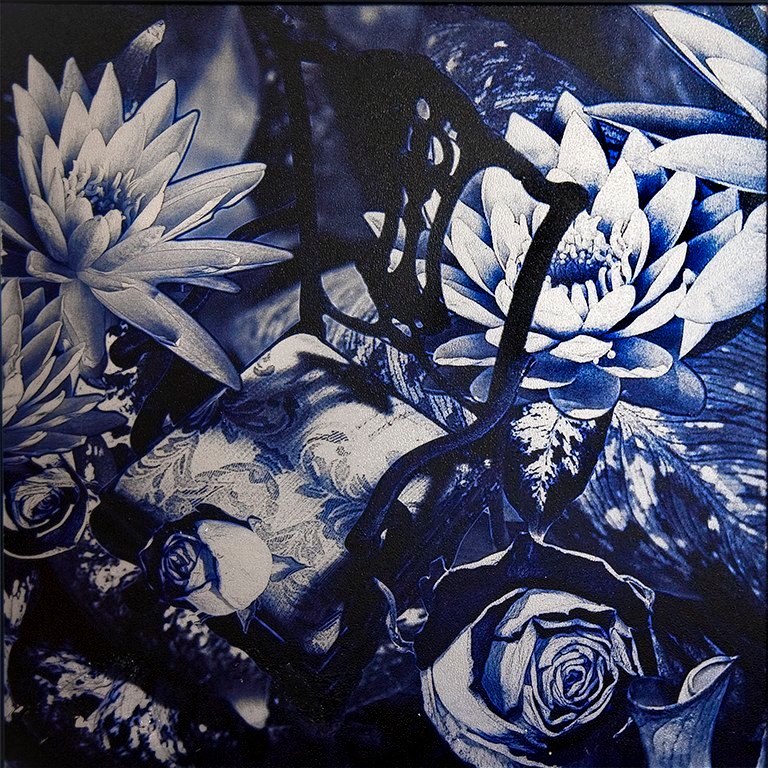 ME: So how do we work to remedy this?

BE: When we first started i came up with the term unique edition. That edition was an edition of a one-of-a-kind print that came from the same matrix of the computer. And, I will say that with my cured ink flatbed printers, there is a difference how the artwork is perceived. These prints are much more accepted by collectors. They commission them.

ME: But many fakes do exist with traditional media, so doesn't it go back to trusting the dealer and the artist for authenticity?

BE: Yes, that's what it's about. You have to know who you're buying from.

I've heard stories of traditional artist signing blank pieces of paper, later to be printed by whomever.

Me. Yes, me too -- specifically about Salvador Dali being one of the ones who was supposedly notorious for doing this.

Okay... so, tell me about your new book.

BE: I'm writing a book named Digital Alchemy: Techniques for Fine Art, Photography and Mixed-Media. It's going to be about all of the products and recipes I've made for creating digital art.

It's strictly process; it will not tell people how to be artists. I'm just giving people tools to go beyond that digital print.

ME: Anything else new and exciting happening?

BL: A gallery in Denver, Walker Fine Art, will have an exhibition that I'm in, and that work will be new work with lasers -- laser flatbed. I've taken these transfer techniques, where i can get my digital image on wood or metal. I sent that to the laser and it transfers that into a print. Also I've devolved a process of putting digital images on crystal colorless glass, which look like daguerreotype. There's an example of those to be in my book.

ME: You have some very informative tutorial podcasts on Youtube, many of which I've seen. Great ideas, it's very inspiring.

BL: Taking really old photography to contemporary media, it's really unique. Every day I get up is a new dawn, and I never have a plan. Something starts.

I'm a little like a canoe in a fast-floating river. When I hit a rock, I just go the other way. My mother said I collect solutions for problems I don't have.

That's why [I've written] the book. I'm giving solutions to other people.

ME: That's wonderful. I enjoyed speaking with you.

BL: Well, thank you for the interview. 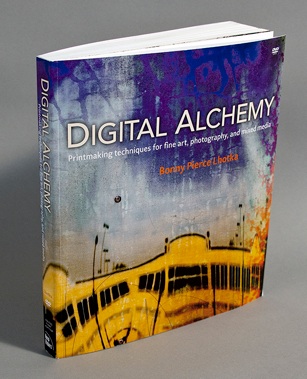