The politically correct primate, known for its "gay" relations, female supremacy, and pacific lifestyle has come under attack. The bonobo is a close relative of both the chimpanzee and us. A "far-flung correspondent" of The New Yorker (July 30, 2007), Ian Parker, went all the way to Africa to see these darling apes frolic in their natural habitat, hoping to come back with new and exciting material.

Alas, he barely got to see any bonobos. Nevertheless, in thirteen pages of cultured prose, we learn about the humidity, rain storms, mud streams, and the sound of falling fruit shells under an eating bonobo. Parker's message could of course have been that fieldwork is no picnic, but instead he went for profound revelation: bonobos are not nearly as nice and sexual as they've been made out to be.

Given that the bonobo's reputation has been a thorn in the side of both homophobes and Hobbesians, the right-wing media were delighted. The bonobo "myth" could finally be put to rest. Parker's piece was gleefully picked up by The Wall Street Journal and Dinesh D'Souza (the same one who blamed 9/11 on the left), who urged "liberals" to stick with their donkey mascot. 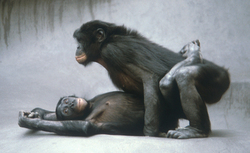 This might all have been amusing if it weren't for the fact that these are not just political skirmishes. At issue is what we know. Parker presented his trip as a fact-finding mission. Yet, the most striking cases of bonobo aggression that he reported have been known for decades, and actually didn't come from the natural habitat, even less from first-hand observation by our brave explorer. A typical description concerned a gang attack by bonobos at a zoo, which ended up costing the victim some digits. Well-aware of such cases, zoos have changed the way they keep bonobos.

The second part of Parker's revisionist attempt was the suggestion that bonobo sexual tendencies have been exaggerated. Since most observations of bonobo sex come from zoos, not the wild, he suggested to ignore them. The problem is, of course, the incongruity of considering zoo observations valid in relation to aggression, yet worthless in relation to sex. One either accepts both or rejects both.

In fact, during two decades before civil war hit this part of the world, there was excellent field work by a Japanese team. Combined with reports from captive apes, a coherent picture emerges. The bottom line is that there is not a single confirmed report of lethal aggression among bonobos, neither from the field nor from captivity. For chimpanzees, in contrast, dozens of killings have been documented.

Most chimpanzee killings occur during territorial disputes, yet bonobos engage in sex at their boundaries. They can be unfriendly to neighbors, but soon after a confrontation has begun, females often rush to the other side to have sex with males or other females. Since such behavior is hard to combine with war, the scene rapidly turns into socializing. When I interviewed the German field worker on whom Parker relies, Gottfried Hohmann, he confirmed this kind of encounters.

But perhaps the bonobo's peaceful image can be countered with descriptions of them eating prey? Not really. The neural circuitry of hunting and aggression are different, which is why herbivores are not any less aggressive than carnivores -- as anyone who has been chased by a bull can attest. It has long been known that bonobos run after duikers and kill squirrels, but this is best kept out of a debate about aggression.

As for sex, shyness about this topic has regrettably led scientists to either ignore sexual behavior or call it something else. They will say that bonobos are "very affectionate," when the apes in fact engage in behavior that would get you quickly arrested if shown in the human public sphere. Two females may be pressing vulvas and clitorises together, rapidly rubbing them sideways in a pattern known as genito-genital rubbing (or "hoka-hoka"), and Hohmann wonders: "But does it have anything to do with sex? Probably not."

Fortunately, a US court settled this monumental issue in the Paula Jones case against President Bill Clinton. It clarified that the term "sex" includes any deliberate contact with the genitalia, anus, groin, breast, inner thigh, or buttocks. In short, when bonobos contact each other with their genitals (and squeal and show other signs of apparent orgasm), leave it to a sex therapist to tell us that they are "doing it."

In short, so long as we call sex "sex" and focus on known levels of violence, there is absolutely no reason to drop the claim that bonobos are relatively peaceful, and that sexual behavior serves a wide range of non-reproductive functions, including greeting, conflict resolution, and food sharing.

I understand the frustration of some experts with the image of bonobos as angels of peace, which is both one-dimensional and incorrect. Possibly, one or two decades from now a new, more complex image of the bonobo will emerge. But a Hobbesian make-over of this ape won't happen any time soon. Japanese field primatologist Takeshi Furuichi said it best: "With bonobos everything is peaceful. When I see bonobos they seem to be enjoying their lives."

For more detailed and foot-noted comments, please, check out: http://www.skeptic.com/eskeptic/07-08-08.html